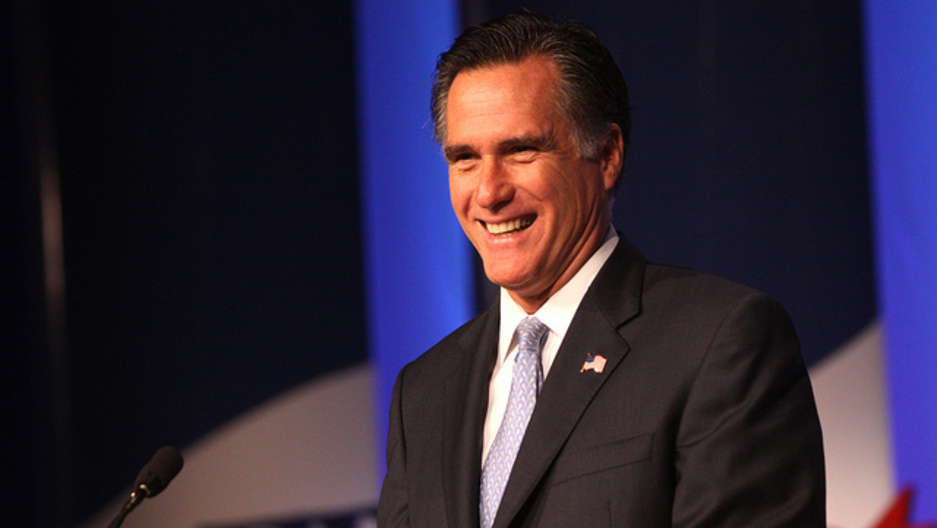 Share
Mitt Romney is scheduled to attend the opening ceremonies of the London Olympics Friday night. The presumptive Republican presidential nominee is also visiting London to raise some cash. Romney's fundraising hosts include lobbyists and banking executives associated with the LIBOR rate-fixing scandal. That's raised some criticism from British parliamentarians. But foreign fundraising trips have become an integral part of running for the American presidency. During the 2000 presidential election, George W. Bush and Al Gore raised a combined $230,000 from Americans living abroad. Four years later, contributions from Americans overseas were again modest. Then, in 2007 presidential candidate Rudy Giuliani took a trip to London and tapped into a new pool of deep pockets. Other candidates quickly followed his lead. "So that in 2008, we saw almost $7 million raised from Americans living abroad in the presidential campaign," said Anthony Corrado, a professor of government at Colby College in Maine. Corrado said this year Mitt Romney and Barack Obama are on pace to blow past that mark — they've already raised $4.5 million from Americans overseas. And that number is sure to swell with Mitt Romney's two fundraisers in London this week. "Generally the events where the candidates are appearing are looking to raise up to $75,000 from an individual," said Corrado. That's the maximum contribution allowed. (That combines contributions to an individual candidate and their party.) And candidates can only accept foreign contributions from American citizens or green card holders. So, what changed four years ago? For one thing, Barack Obama became the first presidential candidate to turn down federal funds for a general election campaign. That meant he didn't have to limit his campaign spending. This year, both major presidential candidates have turned down federal funds. Bhaskar Chakravorti, a senior associate dean at The Fletcher School at Tufts University, said fundraising has turned into a war of attrition. "Every time one side raises a dollar, the other side feels compelled to raise $1.50. And international locations are a natural place to go because you have, I'd say about roughly 4 to 5 million Americans, many of them professionals. Many of them who would like to feel connected to what's going on in the United States. And you can bring them in." (The Census does not track numbers of Americans overseas. Estimates vary from from 4 to 6 million.) About 70 percent of overseas donations between 1991 and 2008 came from Europe, according to Sarah Starkweather, a Lecturer at the University of Liverpool. But she said candidates have gone wherever they could get money. "You had John McCain fundraising in Bermuda. You had candidates in Canada, particularly in Toronto. China, as well, has become, not so much for candidate visits, but a source of campaign funding, for instance through teleconferences or through dispatching proxies." In her research, Starkweather also found that between 1991 and 2008 donations went three to one in favor of Democrats. "I would hypothesize that it's not necessarily because of three to one political support for Democrats. I think it's more to do with just more sophisticated political networks and more outreach by Democratic candidates." Most of the time, it's not the presidential candidate who travels abroad looking for money. They send a surrogate. And the Democrats have come up with bigger draws. "Right now, they're planning a fundraiser in Geneva where George Clooney is scheduled to appear," said Anthony Corrado. Dinner tickets for the Clooney fundraiser are reportedly going for $20,000 a plate. Most surrogates tend to be less exciting than George Clooney though. Last week, Americans in Paris attended a Democratic fundraiser and paid $750 to meet with a former Navy secretary. Mitt Romney sent two of his sons to Hong Kong recently. Of course, if a candidate can show up in-person, they can charge top dollar: again, up to $75,000. But Bhaskar Chakravorti says a candidate has to consider if it's worth spending the time to travel abroad to get that money. "Just to put this in context, these numbers, they're just almost a rounding error, when you look at their overall treasure chest." But hey, if you're going to be in London anyhow, why not grab a quick dinner and raise enough money to run a few more seconds of advertising in Ohio and Florida. In today's campaigning environment, it seems like a no-brainer.