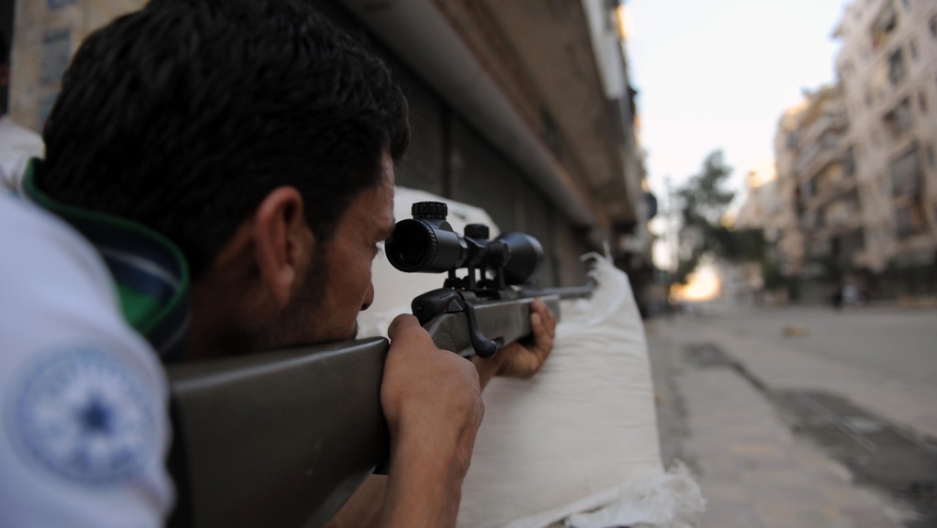 A fighter from the Syrian opposition aims fire during clashes with forces loyal to President Bashar al-Assad, in the center of Syria's restive northern city of Aleppo on July 25, 2012.
Credit: Bulent Kilic
Share

ALEPPO, Syria — Um Khalid, a middle-aged mother, is not used to wearing a headscarf, let alone sneaking through military checkpoints.

But instead of holding her breath, like the anti-government activists in the back seat of her car, she waved happily at the young soldier with the AK-47, who glared back at her through the windshield.

After this test of wills, he motioned her through. And everyone exhaled.

Um Khalid is driving the activists to Salahaddin, the most restive and dangerous neighborhood in Aleppo. There, for months hundreds of protesters have risked sniper fire and armed gangs to march through darkened streets.

Aleppo — Syria’s largest city and a commercial center traditionally loyal to Syrian President Bashar al-Assad — has been simmering in conflict for months.

A rebel offensive launched last week on the first day of Ramadan appeared to catch the regime, still reeling from the high-profile assassinations in Damascus, off guard. Rebel fighters from the countryside easily poured in, capturing key neighborhoods in Aleppo’s center.

More from GlobalPost: Down and out in Damascus

The Syrian army is now striking back with full force. Helicopter gunships and fighter jets are leading the counter-assault, strafing areas of the city.

“Bombardment is strong in most districts of Aleppo, especially from helicopters,” Constantine, an activist here, told GlobalPost. “There are many battles now.”

“It’s a big war. They are shelling Salahaddin and Alsakhour by Mig 23 and helicopter,” Abu Awar, another university activist in Aleppo said this evening. “There are a lot of displaced from these areas.”

Um Khalid, who uses the pseudonym of a son she never had, might seem an unlikely person to help bring the fight to Aleppo.

But women are often the untold story of the Syrian revolution. In the countryside, they’re behind the scenes, treating wounded defectors and cooking for units of the Free Syrian Army. In Aleppo, women are out in the open, at the forefront of the nonviolent campaign to bring change to the country.

Before the uprising, Um Khalid, like many in Aleppo, lived a life of relative luxury. She lived for years abroad and when she returned in 2005, she said life was good. She danced with her husband, visited the hairdresser and spent weekends by the sea. At first glance, she might represent the Syrian upper class that, in the beginning, found little reason to stand against Assad.

She said, however, that the ruthlessness of the Assad family was never far from her mind. Her family was from Hama, where in 1982 Hafez al-Assad massacred an uprising of Sunni Muslims, killing tens of thousands.

“I told my brothers, what kind of men were you to move to Aleppo?” She said, half joking that they moved to a place known for its loyalty to the Assad family.

Now the trunk of her sedan is full of food supplies and baby clothes for the refugees coming from the countryside, who began fleeing to Aleppo almost a year ago. She has lost friends who don’t agree with her new lifestyle, and she no longer agrees with theirs.

“Sometimes I forget my real name,” she said from her spacious apartment, which is now nightly filled with young activists, who she treats to take-out kebabs and sandwiches, “until my husband calls me.”

“Sometimes I forget her real name,” her husband replied.

More from GlobalPost: Not everyone hates Bashar al-Assad

Last Ramadan, after more than a hundred people were killed in Hama, Um Khalid’s daughter, Yaara, said she followed her mom to the protest and was amazed to hear people whispering her name, "that's Yaara," as if she was the daughter of some kind of revolutionary hero.

Yaara later broke down and cried during school. She said she was overcome by the deaths of civilians in Hama. She was quickly reported to security and called in for questioning.

“Why were you crying?” she said the officers asked her.

Um Khalid was also asked to come in for questioning. She told them, defiantly, that they would have to come to her house if they wanted to talk to her. They never did come. But she said her husband wakes with a start every time he hears the doorbell in the middle of the night.

Another time, as she was passing through another checkpoint, an armed man asked her to open the trunk.

“What is this?” the guard asked her, holding up plastic bags filled with a white substance.

“It’s milk for the children in Daraa,” Um Khalid said bluntly. Daraa, a city on Syria’s southern-most border, is where the uprising against the Assad regime first took hold.

“Milk for the children in Daraa!” the officer replied, pulling back the charge on his automatic rifle. He went to speak to his supervisor.

The supervisor looked curiously at Um Khalid. “You told him you were bringing milk for Daraa?” he asked.

“What’s the need to load his gun over milk?” she asked. The supervisor let her go

The university activists have many stories like this about Um Khalid.

“She is our mom, she can do anything,” Constantine, a bearded, longhaired architecture student, said.

Much of her work is heartbreaking. Um Khalid recently counseled a young girl who had been raped by soldiers in Homs. She was mute and unresponsive. Her father sat nearby beating his head against the wall. Finally, Um Khalid got the girl to whisper “Allah.”

“She is still not very good, but I got her to go to a protest,” Um Khalid said.

But Um Khalid is humble about her efforts. “All people in Syria are doing this,” she said.

On July 18, the day Syrian TV announced that four of Assad’s security chiefs — including the president’s brother-in-law, Assef Shawkat — had been killed in a rebel bombing in the capital, Um Khalid celebrated.

More from GlobalPost: Assad after bombing: A million little pieces?

“They reported what we knew long ago,” Um Khalid’s husband said. “Assef Shawkat was poisoned months ago and they’re using this bombing to finally admit it.”

It is a rumor that has long circulated among Syrian activist groups. But whether true or not, the crowd of protesters and friends felt they’d reached some kind of turning point, not least because Syrian TV had for the first time publicly admitted a rebel victory.

That same day the Free Syrian Army was mobilizing just outside of Aleppo. It was Friday of last week, the first day of Ramadan.

“We want to make Aleppo burn like Damascus,” a member of the Towid battalion told GlobalPost. “We first sent ammunition to Aleppo, then we are going in one by one and will attack from the underground.”