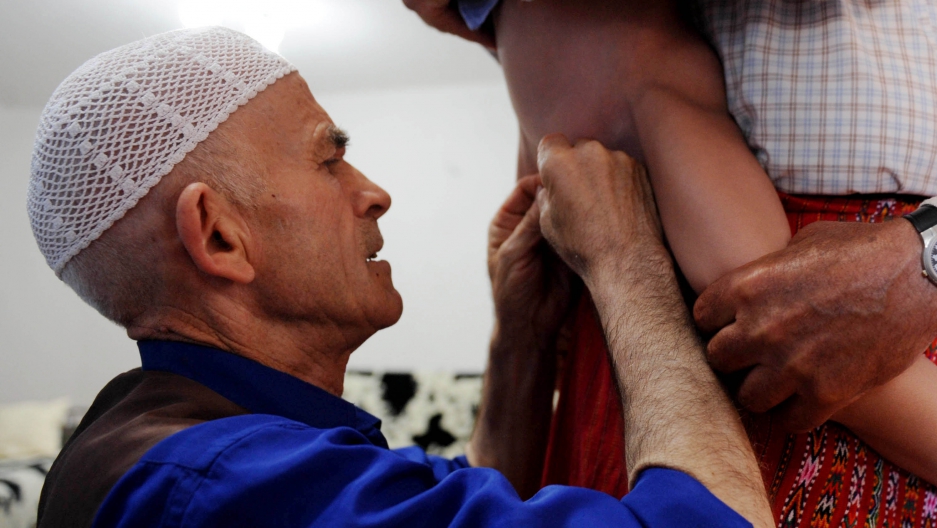 The ban has ignited controversy in a country highly sensitive to its Nazi past and with ongoing, often tense debates about integrating its Muslim population.
Credit: Armend Nimani
Share

BERLIN, Germany — Mimi Lipis reflects the resurgence of Jewish life here. One of Germany’s 200,000 Jews, the 38-year-old lives in what used to be called West Berlin with her American husband Leo and three children.

But she’s worried about a recent development that has generated headlines around the world, along with consternation among the country’s leaders: last month, a court in her home city of Cologne in the west of the country ruled circumcision to be a crime.

Getting her children, including two circumcised boys, ready for school on a sunny morning, Lipis said she’s disturbed by what she believes to be the state’s interference in religious practices, in this case one that is followed by Muslims as well as Jews.

“I think it reflects Islamophobia,” she said.

Leo agreed. “Some judge made a very legalistic ruling based on a very narrow set of facts,” he said, “and he didn’t stop to think about the political consequences of that.”

The regional court ruled that circumcision, even with parents’ consent, amounts to criminal bodily harm after the circumcision of a 4-year-old Muslim boy caused bleeding that required medical treatment.

The ruling prompted a firestorm of criticism from Muslim and Jewish groups in a country highly sensitive to its Nazi past and with ongoing, often tense debates about integrating its Muslim population.

Germany is home to some 4 million Muslims, including the largest population of Turks outside Turkey.

Legislators from the country's main parties in the lower house of parliament responded by promising to pass a resolution that would protect religious circumcision, and the government vowed to enact a new law that would ensure doctors and families will not be punished for carrying out the procedure.

“The resolution shows that we live in a cosmopolitan and tolerant country," said Foreign Minister Guido Westerwelle of the free-trade Free Democratic Party, Merkel’s junior coalition partner. "It would be inexplicable if Jewish citizens in Germany were not allowed to circumcise their boys.”

But overturning the Cologne decision may not be simple. The case was launched after an investigation into the circumcision in question led to charges against the doctor who performed the procedure. Although he was acquitted, the court ruled that circumcision inflicts bodily harm and could be performed as a religious practice only once children are old enough to decide for themselves at age 14.

Legal scholar Martin Boese said drafting legislation that would allow circumcision could be complicated. “If you create a law to make an exception for religious customs, it will be very hard to foresee the cases in which the law would apply,” he said. “Moreover, you have to balance the various rights concerned.”

The legal debate over religious circumcision, which isn’t usually practiced among the majority of Germans, began in 2008 after Holm Putzke, a law professor at the University of Passau, published a medical journal article questioning the procedure’s legality.

Putzke has again spoken out against circumcision since the Cologne ruling.

“It's not about discrimination against religious groups or the total prevention of religious practices,” Putzke told Bayerischer Rundfunk radio. “It's simply about postponing a religious act.”

An emergency conference of European rabbis convened in Berlin earlier this month to discuss responses to the ruling. Germany’s Central Council of Muslims, based in Cologne, said it’s also working with Jewish groups to overturn the court decision.

Hamza Woerdemann said he believed the problem “will be solved,” but he said it would not prevent future “anti-religious campaigns.”

“A hundred percent of the Muslim community is very worried about the issue,” he said.

Sedar Yazar of the Turkish Union of Berlin-Brandenberg said the Cologne ruling has already had a serious effect.

“The perception is that Islam is not a part of Germany and that Muslims don’t belong to German society." The controversy has compounded the effects of an uproar over the recent uncovering of immigrant killings during the past 10 years by a small group of neo-Nazis, he added.

"We as an organization are trying not to think about the issue emotionally,” he said. “We have to evaluate the facts when deciding how to deal with the decision, but that’s not easy when emotions are running high across the country.”

Although the Cologne ruling applies only to the city, it has raised fears among Muslims and Jews elsewhere that carrying out circumcisions will create legal troubles.

Berlin’s Jewish Hospital has suspended religious circumcisions. Martin Mueller, a surgeon at the hospital, said he doesn’t believe politicians can resolve the issue.

“On one hand you have freedom of religion and parental rights,” he said. “And on the other you have criminal law that says you can only perform the procedure for the child’s wellbeing. The question concerns what is actually ‘good’ for the child — preventing bodily harm or providing religious freedom?”

Justice Minister Sabine Leutheusser-Schnarrenberger weighed in on Monday, saying the matter may end in the country’s constitutional court. “It’s more complicated than adding a simple phrase somewhere,” she told Der Spiegel magazine about the plans for new legislation.

However long the issue may take to work through the country’s legal system, Mimi Lipis says she’s not worried for Jews, who will find a way to circumcise their boys even if that requires finding legal loopholes or traveling abroad.

“I think it will be overturned very soon,” she said of the Cologne ruling. “But we’re in an unfortunate, short period of time that puts a very sad light on Germans and Germany.”