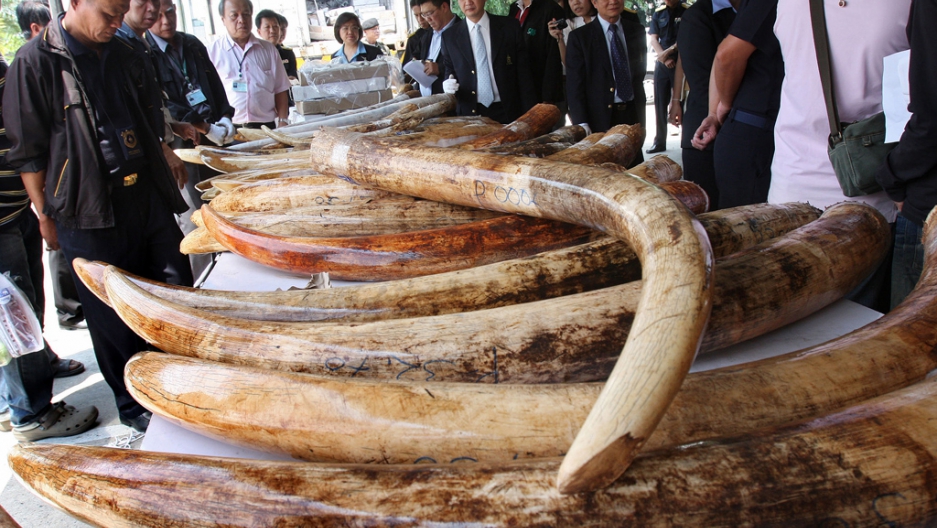 BANGKOK, Thailand — Smuggling boxes of elephant tusks is not so different from smuggling bundles of cocaine.

Both are procured for a pittance and sold abroad for a fortune. Both enrich transnational criminal networks; in ivory’s case, the commodity is acquired in the African savannah and sold primarily in China. Both send mules and middlemen to jail but seldom bring charges upon syndicate kingpins.

The major differences? Ivory is cruelly hacked out of elephants’ heads. Its sales have ravaged Asian elephant stocks and threaten to drive remaining African populations towards a similar fate. And ivory, unlike coke, is openly sold in high-end Hong Kong and Beijing boutiques.

Shooting an elephant for its ivory has been forbidden since 1989, the year poaching was banned by the 175-nation Convention on International Trade in Endangered Species. (Most call the treaty organization CITES, pronounced “SIGH-tees.”) The ban helped slow elephant populations in free fall, the outcome of unruly ivory markets and abundant assault rifles left behind by African civil wars.

But loopholes still allow shop owners in China (and to a lesser extent, Thailand) to claim their ivory bracelets, figurines and necklaces carved from pre-ban stockpiles. Most experts believe this stash dwindled to nearly nothing years ago.

“Realistically, there shouldn’t be any of that left at this point,” said William Schaedla, Southeast Asian regional director for the wildlife monitoring group Traffic. “But they’re allowed to give that excuse.”

More from GlobalPost: Illegal logging, from the rainforest to your dining room

As Asian demand for ivory surges, CITES nations will gather July 23-27 to consider an ambitious new channel for legal ivory sales. Based on a model crafted by the DeBeers conglomerate — which sells diamonds, another African commodity associated with abuse — the concept would see all ivory funneled through a single, highly accountable monopoly.

Can a one-stop ivory shop force out smugglers and steer cash towards saving elephants? Conservationists, fearful the beasts will someday be resigned to zoo exhibits, are skeptical. They’re asking a more pointed question: can’t we just criminalize sales of ivory once and for all?

“If there’s a legal market, there will be opportunities to launder illegal ivory into those markets,” said Mary Rice, executive director of the independent London-based Environmental Investigation Agency or EIA. “It’s not going to work.”

In the British colonial period, United Kingdom buyers drove much of the demand for ivory, according to CITES data. But the post-World War II era saw the market shift eastward to Hong Kong and Japan. China’s current go-getter economic climate has fueled a new class of buyer: new-money, status-obsessed Chinese.

“It’s a prestige item,” Schaedla said. “If you’re newly wealthy in East Asia, and you want to show it off, what better way to do it than with an ivory carving?”

Despite the Chinese government’s insistence that its ivory trade monitoring is sufficient, EIA investigations suggest that roughly 90 percent of the nation’s market-sold ivory is obtained illegally. The demand for ivory in China is so high, Rice said, that vendors will always find a way to claim their bangles and carvings fall under legal categories.

In theory, every ivory item sold in China must be sold alongside a CITES permit confirming its legal status. But according to Rice, these rules have only given rise to a market for fake certificates. The picture is further distorted by two major CITES-approved sell-offs in 1999 and 2008 of old ivory stocks to China and Japan from Botswana, Namibia and Zimbabwe.

Ivory vendors are making full use of these avenues for fudged documents and bogus claims, Schaedla said. “Nobody’s really checking to see where the ivory originated,” he said. “This has allowed a bottomless pit for ivory sellers to draw from.”

If seizures indicate heightened demand, China’s ivory appetite is only increasing. Last year was an “annus horribilis” for African elephants slain to supply the Africa-to-Asia tusk trade, according to Traffic. At least 23 tons of tusks were seized by varied nations’ customs officials in 2011, the worst year in more than two decades.

That figure represents roughly 2,500 dead elephants. The trade is ongoing: just this week in Thailand, both a transit point to China and an illegal ivory destination, airport customs police cracked open a wooden box air-freighted from Kenya that contained 1,000 pounds worth of tusks. The estimated death toll from that haul alone: 50 elephants.

Syndicates play a numbers game that assumes many shipments will be intercepted. Seized China-bound shipments in Thailand and Malaysia, where more ivory is intercepted than in China, show that Chinese government crackdowns can be skirted by shipping tusks to transit points nearby, Rice said.

“During an investigation in China,” she said, “we spoke to one illegal trader who stated that even if he lost nine out of ten shipments, it was still worth his while.”

Worse yet, like drugs, seizures seldom lead to arrests of smugglers near the top of their syndicate’s hierarchy. Customs police in Asian countries rarely contact their African counterparts to help investigate a network’s origins, Schaedla said. “There is a tendency to grab the middleman, who may have a mule-type arrangement, and never get back to the source,” he said.

Other conservationists, such as Richard Vigne of Kenya’s Ol Pejeta Conservancy, insist the penalties in African nations are simply too weak. In a May op-ed, he describes the twin trials of a sheep thief and an elephant poaching crew that took place in the same Kenyan court on the same day in February. The poachers, who dug out an elephant’s tusks with blades, were fined $180. The sheep thief got seven years in prison.

“They shoot these animals, bring them down and you can only hope the animal is dead before they begin hacking at their tusks,” Rice said.

The ivory trade, mired in obfuscation, has pushed CITES to consider a monopoly that would be known as the Central Ivory Selling Organization. Like the South African DeBeers diamond cartel, the organization would attempt to dominate the market and fix prices. But in lieu of chasing profit, this monopoly would be overseen by CITES and kick revenue towards protecting elephants.

The concept, now under review, would render all ivory shipments illegal except for packages delivered through the organization. In theory at least, its controls would satiate demand, drive down prices and lure shops away from illegal syndicates that implicate vendors in crime. According to CITES files, the organization would only sell ivory obtained through natural death, sanctioned sport hunting or elephants killed for encroaching on human settlements.

“It seems entirely beneficial for conservation ... that the value of this ivory should be reinvested in the areas where it originated,” according to proposal commissioned by CITES.

But the CITES proposal is noncommittal and emphasizes that “the proposed system is not a blueprint and should be regarded only as a starting point for discussion.” Conservationists such as Rice consider a monopoly based on a diamond cartel “shocking” and apt to stimulate more Asian demand. “It doesn’t address the failures of the DeBeers system,” she said, “which never stopped the trade in ‘blood diamonds.’”

“Demand is only increasing,” Rice said. “We’re talking about a finite resource from a living animal. This is not just a mineral.”