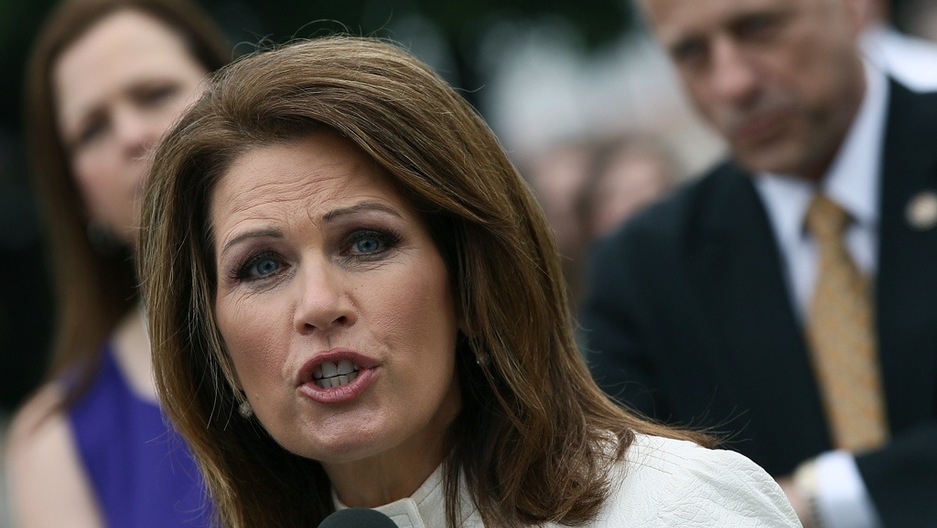 US Rep. Michele Bachmann speaks at a press conference outside the US Capitol on March 21, 2012 in Washington, DC.
Share

CAIRO, Egypt — Michele Bachmann has again ignited a political firestorm in the US, claiming last week that the Muslim Brotherhood in Egypt has “infiltrated the highest levels of US government,” including the White House.

“I haven’t heard these rumors, but they strike me as ridiculous,” said Ahmed Al Nahhas, a long-time Brotherhood activist and leader in Egypt’s second-largest city, Alexandria. “Surely the United States government selects its employees very carefully.”

Bachmann claims that Huma Abedin, a Muslim-American aide to Secretary of State Hilary Clinton, is central to the battle to subvert the US “from within.” Bachmann says Abedin, who is now under police protection, is influencing White House policy at the behest of what Bachmann says are her Brotherhood-linked family members.

More from GlobalPost: Could Egypt's Mohamed Morsi bring peace in the Mideast?

But in Egypt, the birthplace of the Brotherhood, the organization’s leaders were either perplexed by the accusations or simply hadn’t heard them. Nor had they heard of Huma Abedin.

“The Muslim Brotherhood can’t even penetrate the Egyptian government,” said a Brotherhood leader in Egypt’s Daqheleya province, Ibrahim Ali Iraqi, in response to the accusations his group had infiltrated top US agencies.

Indeed, having assumed the presidency following a year of economic tumult and political upheaval, the Brotherhood’s Mohamed Morsi is grappling with severe domestic problems — not least of which is his battle with the ruling military for executive power.

“We are in a period of darkness because the country is still governed by the Supreme Council of Armed Forces — and they have a long history of support from the United States,” Iraqi said. “So it’s ridiculous that these accusations are leveled at us.”

But while the US has in fact long financially supported Egypt’s military — a diplomatic bribe, of sorts, to keep the peace with Israel — only recently have US diplomats publicly warmed to the Muslim Brotherhood.

The US government does not list the Muslim Brotherhood as a terrorist organization, and the group has not carried out a violent, armed attack in 50 years.

“All we have [with the US] is a relationship of mutual respect and mutual interests that must be maintained,” Al Nahhas said.

Bachmann writes that Abedin, an American of Indian-Pakistani descent, “has three family members — her late father, her mother and her brother — connected to Muslim Brotherhood operatives and/or organizations.”

But following her evidence, the links either fail to materialize or are based on ultimately shoddy sources.

Bachmann’s online supporters have taken particular issue with Abedin’s mother, Saleha Abedin, a sociology professor whom they say has been exposed as a member of the global “Muslim Sisterhood,” an organization whose existence is disputed.

The list that supposedly “names” Saleha as a member was posted by the virtually unknown Egypt-based blog, “Al Liwa Al Arabi” (The Arab Brigade), in 2010, with no information on the source or origin of the list.

In the case of Abedin’s father, Syed Z. Abedin, Bachmann points to a paper published by the Brigham Young University Law Review a decade ago. The author says the organization Syed founded — the London-based Institute for Minority Muslim Affairs — received “quiet but active support” from the former secretary-general of the Muslim World League, an international Islamic charity network.

More from GlobalPost: Egypt's Omar Suleiman, a friend of CIA, dies in US hospital

Bachmann's allegations were certainly enough for Egypt’s already overactive rumor mill — and became ammunition for those Egyptians opposed to what they say is US-backed Islamist rule.

Talk of a secret deal between the US and the Brotherhood hit the streets, the television talk shows, and social networking sites — culminating with an anti-Brotherhood and anti-US protest where demonstrators pelted Clinton’s convoy with tomatoes in Alexandria.

“There is a vast swath of this country that is misled by the media,” the Brotherhood’s Iraqi said of rumors of a US-Brotherhood deal. “It just doesn’t make sense to me.”

Hossam Bahgat, director of the Egyptian Initiative for Personal Rights, tweeted that during Clinton’s meeting with Egyptian Coptic Christian leaders in Cairo on July 15, “one participant told Hillary the US admin was infiltrated by Islamists.”