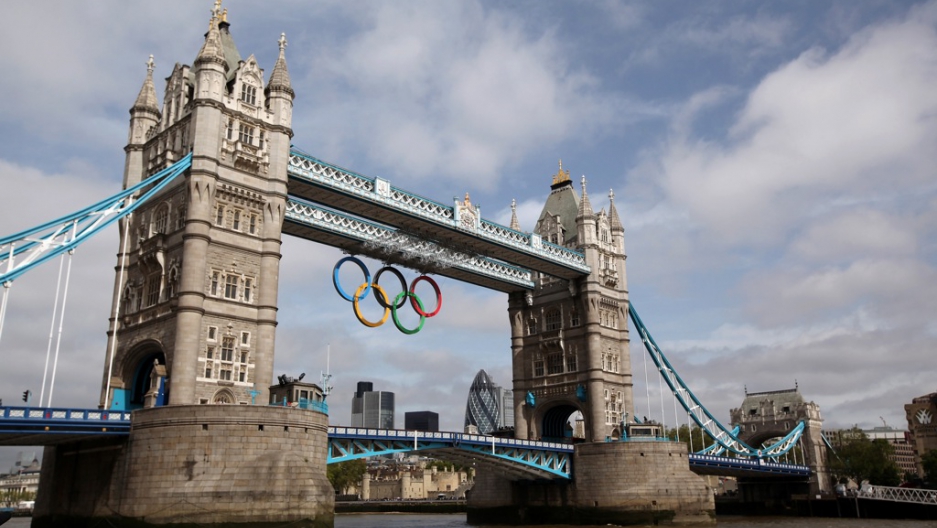 LONDON, ENGLAND - JUNE 27: A giant set of Olympic rings are displayed from Tower Bridge on June 27, 2012 in London, England. The rings weigh over three tonnes and measure over 25 metres wide by 11.5 metres tall; they will be illuminated in a light-show every evening during the Games. (Photo by Oli Scarff/Getty Images)
Credit: Oli Scarff
Share

In the latest in a series of advertising kerfuffles at the London 2012 Olympics, Olympic Delivery Chairman Lord Sebastian Coe admitted yesterday on BBC Radio 4's Today program that spectators wearing clothing branded with the Pepsi logo would not be allowed entry - although the London Organizing Committee later released a statement that only groups wearing "visibly branded" clothing would be barred.

Nike shoes might also present a problem, Coe told the BBC Friday, though he said Nike-loving spectators "probably could" get into the event.

Read more from GlobalPost: Ramadan may cause traffic during 2012 Olympic games

"When you have big British businesses, that are prepared to really invest in the games, you have the responsibility to protect them," Coe told BBC presenter Evan Davis, pointing out that funds for the Olympics must be solicited from the private sector, or else more of the financial burden will fall to taxpayers.

The London Organizing Committee on July 20th elaborated further on Lord Coe's controversial statements to the BBC in response to public dismay over the move. Only large groups of spectators wearing "visibly branded" clothing will be barred from entry, LOCOG said, in an attempt to fight against "ambush" marketing tactics.

Aspirant Olympic photogs claim organizers have been frustratingly opaque about what camera equipment will and will not be allowed into the event venues, and the definition of banned "professional" camera equipment remains unclear, reported the BJP.

In another recent Olympic marketing flap, it was reported in the Telegraph that officers patrolling the London Olympics games would be required to place outside snacks into clear plastic bags, to avoid drawing the ire of the official sponsors - which include food companies Cadbury's and McDonalds.

"Is it right that police should have to take crisps out of a Walkers bag and put them into another bag, in deference to the sponsors?," Davis asked Coe on the BBC program Friday.

"Actually, I'm not even sure that's an accurate portrayal of what would have happened," responded Coe. "Nothing loses anything in the tale."