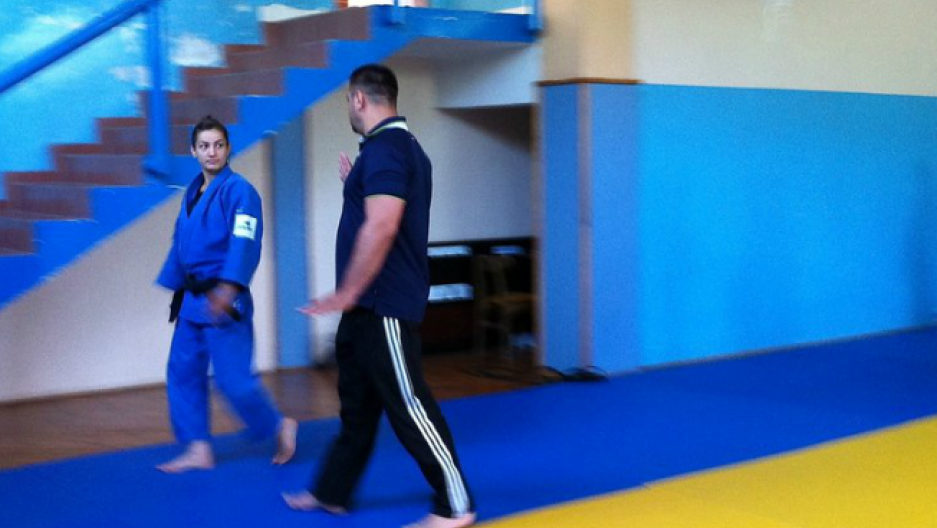 Majlinda Kelmendi talks with her coach, Driton Kuka, after practice recently at her gym in Kosovo. (Photo by Nate Tabak.)

Kosovo’s first Olympian must leave her national identity at home.

Majlinda Kelmendi is one of the best judo fighters in the world, but her country’s contested statehood means she must compete for nearby Albania.

Even while grappling with her sparring partner, Kelmendi, 21, cracks a hint of a smile. But her blows are relentless as she knocks 19-year-old Nora Gjakova to the mat at their training center in Peja, western Kosovo.

See a slideshow of Majlinda Kelmendi training at TheWorld.org.

“She might look calm but she’s very aggressive in the competition,” Gjakova said of Kelmendi. “And, she’s very good. So I don’t think the opponents will like to fight with her.”

Kelmendi is one of the best judo fighters in the world. She’s ranked No. 7 in her under-115-pound weight class. Her Judo skills are taking her to compete in the Summer Olympics in London later this month.

After practice recently, she was relaxing on a terrace at her training complex. Gone was her blue judogi uniform, replaced by a T-shirt and shorts.

The young judoka — or judo fighter — has been training here since she was 8.

“When I started judo, I saw another side of me,” Kelmendi said. “Because normally I am really quiet — I don’t talk so much — everybody who doesn’t know me, they say, 'How is this possible, you are so, feminine, so quiet,' but in judo I am just myself.”

Kelmendi plans to represent something much bigger than herself during the Summer Olympics in London. She’ll be the first Kosovar Olympian since her country declared independence in 2008.

“Everybody from Kosovo will watch me in the Olympics, so it’s a big responsibility, but I’m also happy for this because I will just prove that Kosovo also has good athletes,” Kelmendi said.

But Kelmendi won’t be there for Kosovo. She’s representing neighboring Albania.

“We wanted so much to go for Kosovo, just because Kosovo, it’s a new country,” Kelmendi said. “We thought this is a good chance to represent Kosovo — to show that we are a new country and small country, but we can do big things.”

The International Olympic Committee doesn’t recognize Kosovo because it isn’t a United Nations member state. In May, the IOC rejected Kelmendi’s request to compete as an independent athlete.

It ruled Kelmendi must represent Albania because she’s also a citizen there. Kelmendi is an ethnic Albanian and she became an Albanian citizen in order to compete in more matches. But Kosovo is home.

“We’re originally from Kosovo, we live in Kosovo, Majlinda is made in Kosovo, in this sports center. Everything was made in here,” said Driton Kuka, who’s been Kelmendi’s coach from the start. “I hope this will be extra motivation for us to achieve a good result in London.”

Kelmendi’s Olympic conundrum is all too familiar for her coach. He had hoped to qualify as a judo fighter for Yugoslavia in the 1992 Olympics in Barcelona. But in the early 90s, thousands of Kosovo Albanians were forced from their jobs under the policies of Slobodan Milosevic.

Kuka was kicked off the Yugoslav Olympic team. Yugoslavia was ultimately banned from the Olympics due to U.N. sanctions over the war in Bosnia. Athletes from the former Yugoslavia were allowed to compete independently, but for Kuka, it was too late.

“In that case, I lose my Olympics and I lose my career,” Kuka said. "And I think, after 20 years, my athlete, which is Majlinda, she will continue when I stopped.”

Kelmendi has high ambitions for her Olympic debut.

“I mean, ‘gold,’ it’s a really big word, but yeah, I’m going there for a medal because I have worked too much,” Kelmendi said. “I have sacrificed too much. Not just me. Our coach, our federation. We have worked too hard.”

If Kelmendi does win a medal it will also be a very big deal for Albania because it would be the country’s first since it began participating in the Olympics 40 years ago.

Kelmendi said as an Albanian from Kosovo, she’s proud to represent Albania the country. But she’s still frustrated that the question of her country’s political status is looming over the story of her own athletic compromise.

“I just want to be from Kosovo,” Kelmendi said. “I don’t want more of these questions when I go into a competition: ‘What’s this? Sometimes you’re Albania sometimes you’re Kosovo,’ and then all the time you have to explain the same thing. This is really not good.”