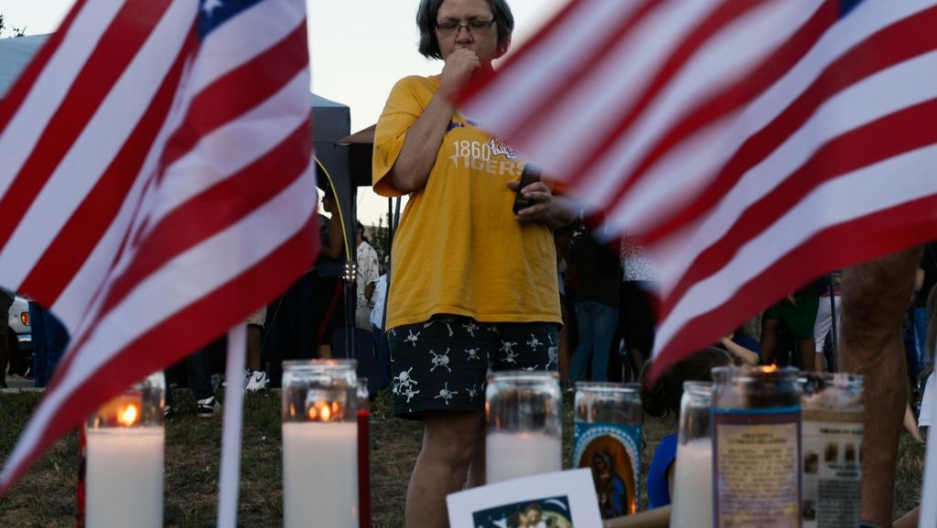 An American tragedy: the mass shooting in Aurora, Colorado, has US voters talking about gun control, again. But will it prove anything more than talk?
Credit: Kevork Djansezian
Share

BENTON CITY, WASHINGTON — Vineyards and orchards stretch over the Horse Heaven Hills in this tiny, idyllic agricultural community nestled in a bend of the Yakima River. The population – just 3,000 – includes small vintners, farmers, and engineers working to clean up the Hanford site, a decommissioned nuclear production complex nearby.

It makes for an eclectic mix, as became apparent at a cocktail party at a local winery Friday evening. About 25 people, mostly professionals in their fifties and sixties, gathered on the patio to sample Malbec and sauvignon blanc, nibble on crab dip and bratwurst, and discuss the country’s latest tragedy, the horrific shooting of dozens of moviegoers at a theater in Aurora, Colorado.

The deaths of at least a dozen have left people so shocked and saddened that, for once, politics took a back seat to empathy.

“What is there to say?” asked Cynthia, whose husband is an engineer at Hanford. “It is horrible, but we cannot possibly know why [the shooter] did it.”

Most were appreciative of the restraint shown by President Barack Obama and his challenger, former Massachusetts governor Mitt Romney, in refusing to drag the victims into the political fray.

Obama cut short his campaign tour of Florida to return to Washington to try and deal with the crisis. Romney also suspended his appearances out of respect for the victims and their families. Neither man has mentioned what seems to be uppermost in everyone’s minds: gun control.

James Holmes, the alleged shooter, had bought four guns in recent weeks, all legally, all in local shops, according to multiple news sources.

Just as in the wake of the Arizona shooting in January 2011 that killed six and ended the political career of Congresswoman Gabrielle Giffords, people wanted to know what would be done.

More from GlobalPost: Was state law a factor in Aurora shooting?

“When will we finally address gun control?” asked Maddie, who works at a local college. “How many more people have to die?”

But that is a difficult question in this highly conservative area.

“People love their guns here,” said Joel, who has lived in eastern Washington State for over a decade. He warned that a neighbor was prone to discharging semi-automatic weapons at the drop of a hat.

“Don’t be surprised if you hear gunfire in the middle of the night,” he said.

Joel is planning on getting out of the area as soon as he retires from his job in the local potato industry.

But Jim W., whose career has taken him all over the world, was much more blasé about the whole thing.

“Men kill people. Always have, always will,” he shrugged. “There’s not much we can do.”

Holmes, the suspect, is now in custody; no one will speculate on any possible motivation. The young PhD student was apparently a mystery to those around him. Police were still trying to clear his Denver apartment of numerous booby traps on Saturday.

More from GlobalPost: Where does Obama stand on gun control?

Denver residents say that the several buildings at the University of Colorado Denver, where Holmes was enrolled, were closed on Friday.

“The neuroscience department at the medical school was affected,” said Judith, who has friends and colleagues at the university. “They cleared the two research buildings, with lots of labs and some offices to which [Holmes] had access, and the university sent everyone home in the afternoon.”

Judith, like many Americans, is wondering what the follow-up to the latest tragedy will be.

“As far as I can tell, no politician has said a word about gun control,” she said.

New York Mayor Michael Bloomberg did raise the question during his a regularly scheduled appearance on WOR 710 AM in New York. He also taped an interview Friday set to air on “Face the Nation” on Sunday. He called on Obama and Romney to address the issue.

“I don’t know what [Obama and Romney] are going to do, but I think it’s incumbent on them to tell us specifically,” Bloomberg said. “You know, we spend all our time talking about tax returns and gaffes and things like that. This is one of those issues, along with a handful of others, that really matter to the American public.”

Maybe Bloomberg is right, but the American public seems to be as divided on this issue as they are about almost everything else.

“One guy said he wondered why more people in the theater didn't have guns. That would have been something, wouldn't it?” asked Judith.

According to the New York Times, Luke O’Dell of the Rocky Mountain Gun Owners advocated for more guns, rather than fewer.

“Potentially, if there had been a law-abiding citizen who had been able to carry in the theater, it’s possible the death toll would have been less,” he said.

But this prospect does not resonate with Larry, 61, the proprietor of a small winery in Benton City.

“So, what, are we all going to be packing heat to go to the movies now?” he asked. “I mean, you are just going to the theater, you expect to have a good time, and all of a sudden people are getting killed around you?”

No matter what the provocation, though, people here in Washington do not expect that anything will change.

“Did anything change after Arizona?” asked Joel, referring to the Giffords shooting. “No, and nothing will happen after this one. We will just keep on as we always do.”

“What is it going to take to wake people up?” he asked.