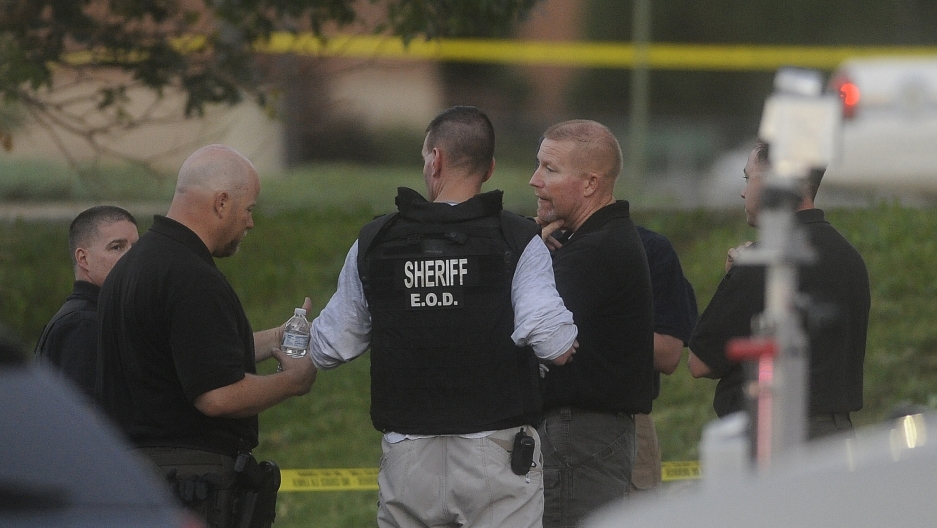 A masked gunman opened fired at a midnight showing of “The Dark Knight Rises” in a movie theater in a Denver suburb early Friday morning, killing 12 people and injuring 59 others, authorities told reporters.

Witnesses say that shortly after midnight, a man wearing a gas mask, body armor and a tactical helmet set off a smoke device in the theater in Aurora, Colo., and began firing during a shooting scene in the movie.

Aurora Police Chief Dan Oates said one suspect was in custody. Police have identified him as James Holmes, a 24-years-old American and Aurora resident. Oates said there was no evidence of a second gunman and no clues as to what motived the shooter.

The New York Times reported that Holmes told police he had booby-trapped his apartment with explosives, leading police to evacuate five nearby buildings as they disabled the wired devices.

At first, moviegoers in adjacent theaters believed the smoke and gunfire to be a part of the film, but people began to panic as the shots continued, and even penetrated through the walls.

Ben Fernandez, a moviegoer, described the situation as "complete chaos." He saw a number of victims covered in blood.

The shooter carried at least two weapons, a rifle and a handgun, according to a federal law enforcement official. A third weapon was found inside the theater.

Steven Wolf, an on-duty emergency physician at the Denver Medical Health Center, said his team had seen six patients injured in the shooting. All were over 18 years old. Wolf said two were in serious condition and would likely undergo surgery.

"Our physician teams that were called to action, so to speak, have started to break down and go about catching up with the work that they had to put on hold," Wolf said. "The patients here have been stabilized, and definitive care plans are being arranged."

Twenty of the victims are reportedly receiving treatment at the University of Colorado Hospital, including a patient who is three months old.

President Barack Obama said in a statement that he was “shocked and saddened by the horrific tragic shooting in Colorado.”

"My administration will do everything that we can to support the people of Aurora in this extraordinarily difficult time," Obama said. "We are committed to bringing whoever was responsible to justice, ensuring the safety of our people, and caring for those who have been wounded."

The New York Times reported Obama was cutting short a Florida campaign trip and would return to Washington Friday afternoon.

The shooting was the worst mass shooting in Colorado since the Columbine High School massacre on April 20, 1999 in Littleton, another Denver suburb. Then, two teenage gunmen killed 12 classmates and a teacher and injured 26 others before killing themselves in the school library.