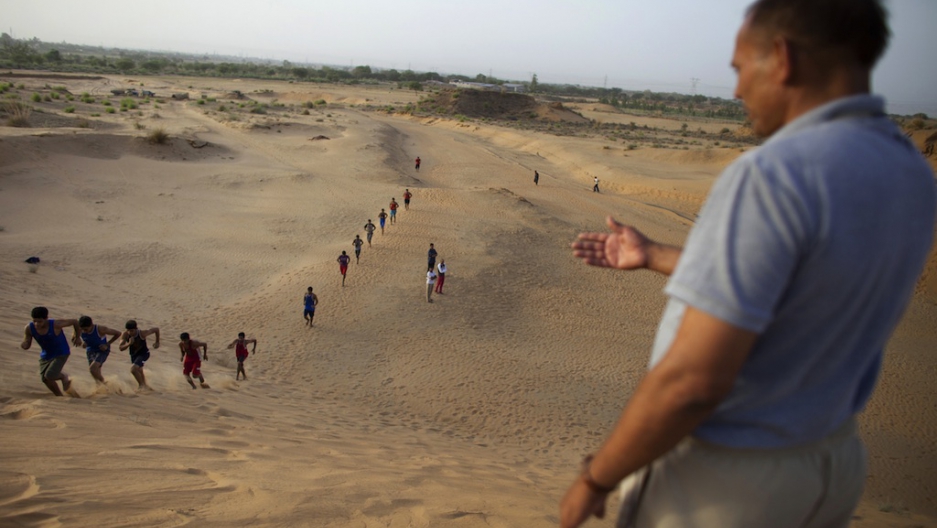 To make the best use of the club's limited space, three pairs of fighters touch gloves in each of the club's two rings. And at the end of each three-minute round, Coach Jagdish Singh turns his attention to a crowd of 11- to 15-year-old boys, watching in rapt attention from the floor in front of the rings.

“Shadow!” Jagdish calls out, following a shrill blast of a police whistle that signals the youngsters to begin shadowboxing.

Since Jagdish started the Bhiwani Boxing Club (or BBC, as he likes to call it) in 2003, he has flagged off a revolution in the sport. Training thousands of boxers in this dusty Haryana backwater — a farming community with only around 200,000 residents — he's taken home 150 medals in international competitions.

BBC has produced nine out of India's 16 Olympic qualifiers since 2004. And in a sport where coaches once despaired that India had no chance at the victors' podium, Jagdish sent three boxers to the quarter finals in Beijing, with his longtime student Vijender Singh bringing home India's first medal (a bronze) in the 75 kilogram weight class.

This year, Jagdish has two boxers in the Olympics (there are three others from the state of Haryana) including Vijender and Vikas Krishnan (69 kg). But the coach says two more of his male fighters and one female boxer from his club, who had all won international accolades, might have qualified as well if Indian amateur boxing authority had given them the chance.

Moreover, it's part of his legacy that India is sending its largest boxing team ever to London — seven men and one woman. And he deserves a large part of the credit for the fact that all of them believe they can bring home a medal, a feat that he swore to achieve way back in 2000 at a meeting where none of the country's other coaches were willing to claim India had a chance.

“I know of very few coaches in India who are really dedicated. ... But when it comes to Jagdish, there was something which you could call an obsession,” said Shamya Dasgupta, the author of a new book about Indian boxing called “Bhiwani Junction.”

“When you look at the cream of Indian boxing ... they are all from Bhiwani, or they have all trained in Bhiwani,” Dasgupta said.

Today known as “Little Cuba,” a reference to that country's dominance of Olympic boxing, Bhiwani, like its famous coach, is obsessed with the sweet science.

“Since the last 16 years, I have had no personal life,” says Jagdish, who received India's highest honor for a coach, the Dronacharya Award, in 2007. Providing room and board for 40 to 50 boxers at a time, keeping them out of trouble and sending them to school, he makes sure BBC is open seven days a week, 365 days a year.

“Out of 24 hours, I go to my house sometimes 10 o'clock, sometimes nine o'clock, and early in the morning, five o'clock [I come to the gym],” Jagdish says. “I never go on leave. I never go on any tour. I never go to any marriage or family function. I am totally cut off from my family life, from my relatives. My main motivation, my main work is boxing, boxing, boxing.”

Along with 70 elite prospects, 40 of whom live in a dormitory on the premises, Jagdish says walk-ins from the town and nearby villages are common — with around 100 on-and-off pupils from Beijing Olympic hero Vijender's neighborhood alone.

Others, like 16-year-old Prince Rana, have traveled from as far away as Gwalior, Madhya Pradesh — some 300 miles, across three state borders — to train with the best.

“This training is world class. The best in all India. In Gwalior there is no boxing,” said Rana, whose parents pay around $100 a month for him to live and train at BBC. “In 2008, I saw Vijender Singh fight, and I learned that he'd practiced here for eight years. That's why I came here.”

It's a remarkable change for Indian sports, which until recently, apart from cricket, had not inspired much enthusiasm or generated much success.

More from GlobalPost: Indian journalist in critical condition after shooting

Since it sent its first athlete to the Olympics in 1900, the country has won just 20 medals — five fewer than little Japan won in 2008 alone. Not long ago, parents across the nation discouraged children from wasting time on sports instead of studying. And those athletes who did manage to excel often had to drum up their own sponsors to fund their training.

Now, however, thanks in large part to Jagdish and Beijing bronze medalist Vijender — whose Olympic medal and moviestar looks have landed modeling gigs, commercials and reality TV appearances — the lower-middle-class families of Haryana have begun to believe in boxing. And it's not just about putting in a few years to earn a sinecure as a constable in the state police or a ticket agent with the Indian Railways.

These days, like many of the 81 athletes competing for India at the London games, Jagdish's fighters are aiming for gold.