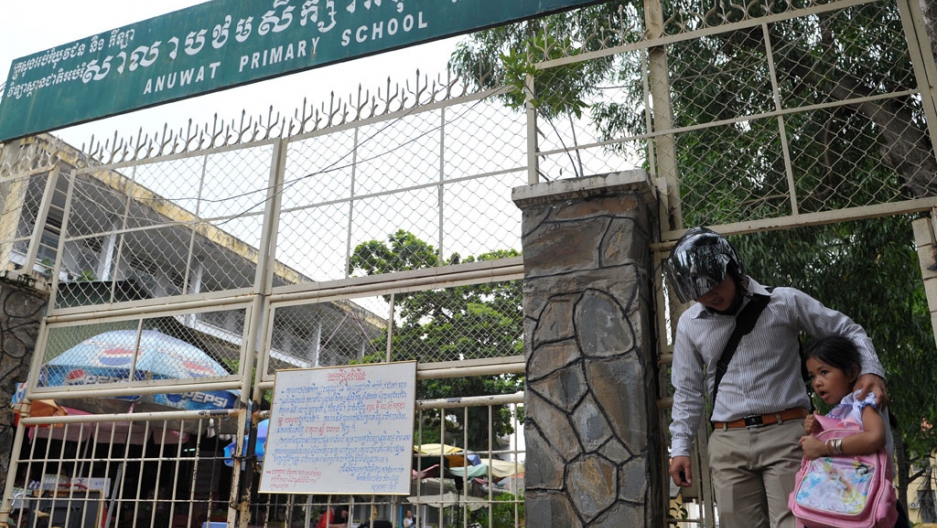 A Cambodian girl walks out of a school with her father in Phnom Penh on July 18, 2012.
Credit: TANG CHHIN SOTHY
Share

Cambodia has closed all of its kindergarten and primary schools in anticipation of another outbreak of the widely-reported Enterovirus 71 (EV-71) virus, which has killed 55 children thus far, reported Reuters today.

"After receiving report from some provinces about the rapid spread of hand, foot and mouth disease in schools, we don't have to wait two more weeks," said Mak Van, Education Ministry Secretary of State, to Reuters.

Reuters reports that schools will be closed for a total of 10 weeks, as they were already slated to close for holidays at the end August. CBS reports a total of 9,000 schools will be shuttered. 18 schools were also closed in neighboring Thailand.

The closures represent another unfortunate gap in the education of Cambodia's children due to outside events. Last year, hundreds of schools were closed due to catastrophic flooding, reports IRIN, and many were damaged.

The WHO - earlier accused by Cambodian doctor Beat Richner of fostering "needless panic" over EV-71 in the BBC - disagreed with the school closure call, Reuters reported. "We did not recommend the closing of nurseries and primary schools because that would create unnecessary public panic," said WHO representative Sonny Krishnan to Reuters, via e-mail.

"The HFMD caused by EV-71 is under control by the Ministry of Health and ...(it has) the capacity to contain it."

According to the WHO source quoted in Reuters, no new cases of EV-71 have been confirmed.

The virus was identified as EV-71 or Foot and Mouth Disease earlier this month after a period of widely-publicized confusion on the part of the WHO and the Cambodian Ministry of Health.

The virus as it has manifested in Cambodia kills extremely quickly and tends to be hardest on children under 3 - prompting a wave of international media attention and speculation, reports the BBC.

Dengue fever presents another major threat to Cambodians, reported Xinhua today. Dengue fever - a tropical, mosquito-spread disease that is particularly rough on children - has killed 60 kids in the first six months of 2012.