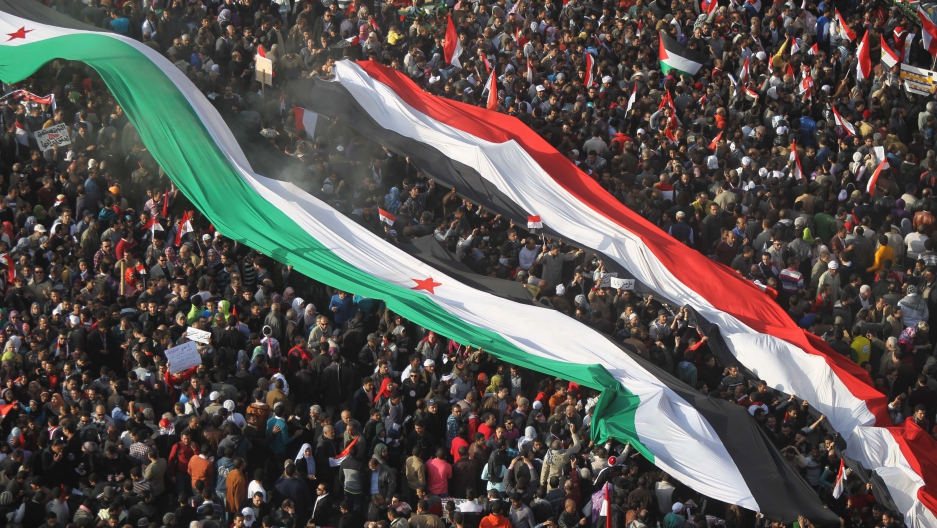 Egyptian protesters hold up giant national and Syrian flags during a rally in Tahrir Square on January 25, 2012, on the first anniversary of the country's revolt against the former regime. AFP PHOTO / KHALED DESOUKI
Credit: KHALED DESOUKI
Share

CAIRO, Egypt — Syrian activists in Egypt reacted with an emotional mixture of surprise, joy and skepticism to the news that a devastating bomb attack on a state security building in central Damascus killed a number of high-level regime figures, including a brother-in-law of President Bashar al-Assad.

The attack, first reported by Syria’s state television, is the most successful hit by Syria’s rebel forces on the Assad regime since an uprising kicked-off last year.

As the stand-off between demonstrators and Syria’s vast security apparatus has grown increasingly bloody — with army troops cracking down hard on rebellious towns, killing as many as 15,000 people, according to Syrian human rights groups, and with anti-regime forces taking up arms — many Syrians have fled the violence for the relative calm of Cairo.

Here, they organize demonstrations outside the Arab League offices, coordinate with opposition forces to polish the rebels' media image, or simply wait, biding their time until they can return home.

Qutaiba Idlibi, 22, fled Syria for Cairo six months ago, he says, after he was tipped off that security forces were planning on kidnapping him and his younger brother.

“I’m still surprised [by the bombing news],” Idlibi said in Cairo today. “And I’m still worried because of the way that the government, and Syrian [state] television is dealing with this news. It’s not the usual way they deal with things, and I feel like there is more going on than we really know.”

Syria’s state television channel, SANA, is notorious in its role as mouthpiece for the Assad government — painting demonstrators as terrorists, downplaying challenges to the regime and spreading false information.

Its swift announcement of the attack — which SANA said killed the defense minister and his deputy, as well at least one other security official, in a serious blow to Assad — raised the suspicions of some close Syria watchers.

But Nizar Al Kharrat, a 54-year-old veteran Syrian activist in Cairo, said he believed the reports, and that it marks the beginning of the end of the Syrian government.

“What happened today, I believe this is a first real action that will take down this regime,” Al Kharrat said.

“We are waiting for this to happen [the fall of the regime], so that we can begin to take our future into our own hands,” Al Kharrat said. “And so we can go back home to our country to rebuild a government for the people.”

More from GlobalPost: Attack is like a bomb going off as US Joint Chiefs of Staff meet in the Situation Room

Al Kharrat said his family has long been at odds with Assad’s Baath Party, forcing his father to flee Syria for Egypt 40 years ago, when Assad’s father was president.

Egypt and Syria once formed a short-lived United Arab Republic, from 1958 to 1961.

Waleed Al Bouni, a former member of the Syrian National Council (SNC), an opposition umbrella group, said Egypt needs to play a stronger role in calling for Assad’s ouster, and assisting in the country’s transition.

“I think what we need from [Egyptian President Mohamed] Morsi, and from other Arab countries is to say: yes, an Arab power is ready to intervene when the regime collapses,” Al Bouni told GlobalPost by phone from Budapest, Hungary.

Al Bouni was living in Cairo until recently, when he resigned from his position with the SNC.

“We will need an umbrella coalition of Arab and international powers to ensure there is a peaceful transition period,” he said.

More from GlobalPost: Assad's Plan B: A breakaway Allawite state

Al Kharrat said he was coordinating with other Syrian activists in Cairo, as well as Egyptian revolutionaries, to hold celebrations in the iconic Tahrir Square.

A small but vocal group of anti-Assad activists have camped in Tahrir Square, outside the Arab League building, for months to show support for opposition forces in Syria.

But Idlibi said it is not the time for celebrations, particularly since the fighting in Damascus has yet to die down.

Unconfirmed reports of clashes between troops and rebels, as well as mass army defections, continued to stream out of Damascus Wednesday.

“People are still being killed in neighborhoods in Damascus. The [government] hasn’t stopped shelling,” Idlibi said. “We shouldn’t celebrate yet.”