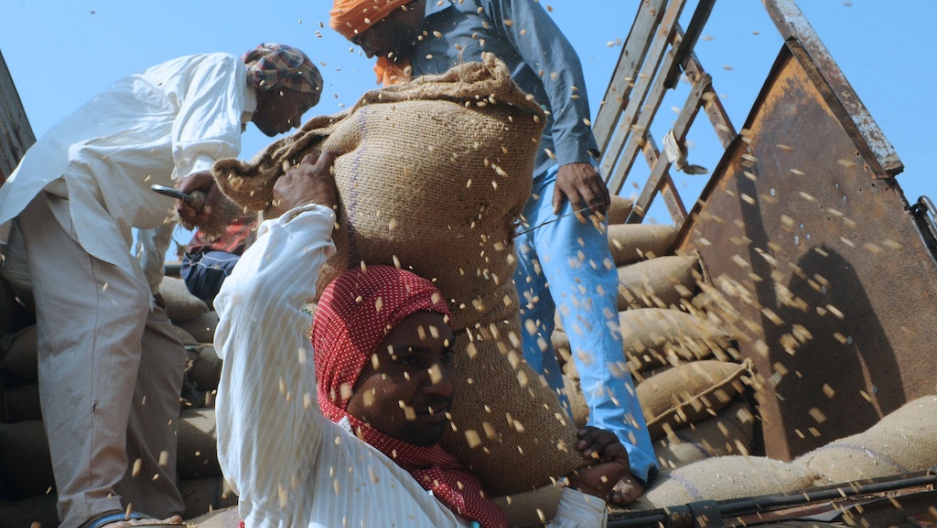 Men stack thousands of sacks full of wheat which run the risk of being rotting due to vagaries of nature. India's wheat production is one of the world's largest, but many in India still go hungry.
Credit: Narinder Nanu
Share

NEW DELHI, India — Never mind that a fifth of India's population remains undernourished and some 3,000 children die each day from hunger-related causes. By all appearances, India, or at least the Indian government, has too much food.

Last week, after the revelation that millions of tons of improperly stored grain would be ruined by monsoon rains, India lifted a four-year ban on wheat exports and cleared the way for the state-owned Food Corporation of India to send 2 million tons overseas. It also approved the release some 8 million tons of grain into the domestic market.

Shipping grain abroad while millions starve in India has elicited a strong response from critics.

On paper, that hardly seems to be the case. India spends about $14 billion a year, or 1 percent of its gross domestic product, to provide subsidized grain to a third of its people — at least theoretically. Prime Minister Manmohan Singh's administration is considering a move to enshrine the “right to food” in law and double the number of people eligible for subsidized grain.

But everywhere except on paper, the system can seem irretrievably broken. And India's mounting deficit has caused many right-leaning economists to question whether now is the time to spend even more money on a broken system.

Hunger, malnutrition and starvation are different, though related problems, so more calories isn't a cure all – particularly if all those calories come from wheat and rice. But even when everyone knows that people are dying because they have nothing to eat, the government appears incapable of making the welfare system function at its most basic level.

More from GlobalPost: TB or not TB: India crowdsources research

“The shocking thing is that many of these [starvation] cases have been followed up on by the media, many times,” said Ashwin Parulkar, a researcher with the New Delhi-based Center for Equity Studies who recently investigated the government response to starvation cases. “But the simple administrative tasks that are supposed to prevent these things aren't even enforced when these calamities have already happened.”

In rural Jharkhand, for instance, a woman whose husband starved to death two years ago was still waiting for a card certifying her as eligible for subsidized grain. When Parulkar confronted local administrators, they told him they would get her the card. They even gave him a specific date. But even after Parulkar published his findings in a thoughtful, six-part series for the Wall Street Journal's India Real Time blog, the woman still hasn't received it.

They have "no shame in admitting it hasn't been done,” Parulkar said. And "no shame in promising something they know they're not going to do.”

For several years now, India has complained of a so-called “paradox of plenty.”  As higher yields have produced more and more rice and wheat, the Food Corporation of India (FCI) has snapped up ever larger amounts to prop up prices for the country's millions of farmers — until all the warehouses were full, and towering stacks of wheat and rice had to be abandoned to rot under the open skies.

India's food subsidy system was designed for two purposes. FCI buys grain at a so-called “minimum support price” to protect farmers from a crash when the monsoon delivers a bumper harvest. And it is supposed to sell or give away that grain at below market rates to protect the poor from starvation.

“The refusal of the government to let go of these food grains is at the heart of [the problem],” said Biraj Patnaik, principal adviser to the Supreme Court on the proposed right to food law.

Since 2003, the government's “buffer stock” of food grains has rarely been less than double the prescribed norm, according to Kaushik Basu, chief economic adviser to the prime minister, writing in Economic & Political Weekly. Over the same period, as Indians continued to go hungry, wheat prices in India soared. They rose as much as 30 percent higher than international rates in the summer of 2010. Meanwhile time after time the FCI sold off its so-called excess on the international market for less than the price it could have earned at home.

“I see no justification for a hungry nation to be exporting food grains,” said Sharma. “How can you be so criminal in your thought process?”

More from GlobalPost: Quit India? The country's new colonizers are Indians, too.

The usual explanation is corruption. It's not that the government doesn't want to release its stockpiled grain to the poor, the argument runs. But there's little point to the exercise, since as much as 18 percent of rice and 67 percent of wheat intended for the poor is diverted before it reaches the target, according to a frequently cited study. And if that's not bad enough, corrupt traders sell a healthy portion of that diverted grain right back to the FCI for a minimum price — scamming the government into paying a subsidy for the same grain again and again.

But that's not the whole story. Theft of the grain intended for the poor has dropped significantly, according to economist Reetika Khera. And the most marked improvements have been achieved in states that have simultaneously reduced grain prices and expanded the system's coverage, Khera argues, citing moves by Andhra Pradesh and Tamil Nadu to offer rice to everyone at the subsidized price of one rupee per kilogram. In other words, the closer the system comes to a universal subsidy for all, the better it seems to work.

Since 1991, when, as finance minister, Manmohan Singh initiated the dismantling of India's planned economy, India has dramatically reduced public investments in agriculture and rural areas. Meanwhile, the WTO-related removal of trade restrictions forced Indian farmers to compete with “highly subsidized large producers in the developed countries, whose average level of subsidy amounted to many times the total domestic cost of production for many crops,” Ghosh wrote in a 2005 background paper for the United Nations' Human Development Report. The result was a “very pronounced” reduction in food grain consumption.

India's economic liberalization also resulted in deep cuts to the public distribution system. On the insistence of the World Bank (which had backed the loans that bailed India out of a financial crisis in 1991), the government scrapped its near universal food grain subsidy in favor of a system that targeted only below poverty line families in 1997.

Since then, millions of people have slipped through the cracks, unable to secure ration cards testifying to their poverty. The effort to separate the absolutely destitute from the very poor has added new complexity to a system already plagued by bureaucratic inefficiency, and, presumably, offered new opportunities for graft.

But the biggest embarrassment has been the government's effort to reduce costs by charging more for grain sold to above-poverty-line families. That effort has backfired miserably.

Between 1997 and 2000, FCI increased grain prices by 80 percent for below-poverty-line families, while the rates that above-poverty-line families had to pay doubled. But the prices were too high for the poor to afford, so the only result was that people bought less grain — and ate less. Instead of selling grain at a loss, the government wasn't selling it at all. The stocks mounted, increasing from some 18 million tons in 1998 to more than 50 million tons in 2003.

Over the past decade, the amount of grain purchased by below-poverty-line families has increased — mostly because states like Andhra Pradesh and Tamil Nadu have expanded coverage and offered additional subsidies over and above the FCI discount. But offtake at the above poverty line rate has remained low, even as market rates soared and states clamored for more, simply because the central government refused to sell, said Ghosh.

As a result, at last count the government had 82 million tons of grain in hand, hoarded for the emergency it never acknowledges has already arrived.

But despite all the furor about its cost, the new and improved targeted system still relies on the broken method of trying to identify the poor – whose numbers rise and fall much more rapidly than the government can conduct economic surveys. It ignores evidence from the states that suggests universal subsidies work best.

And even after the expansion it will still cover a lot fewer people than the near universal food program India had until the 1990s.