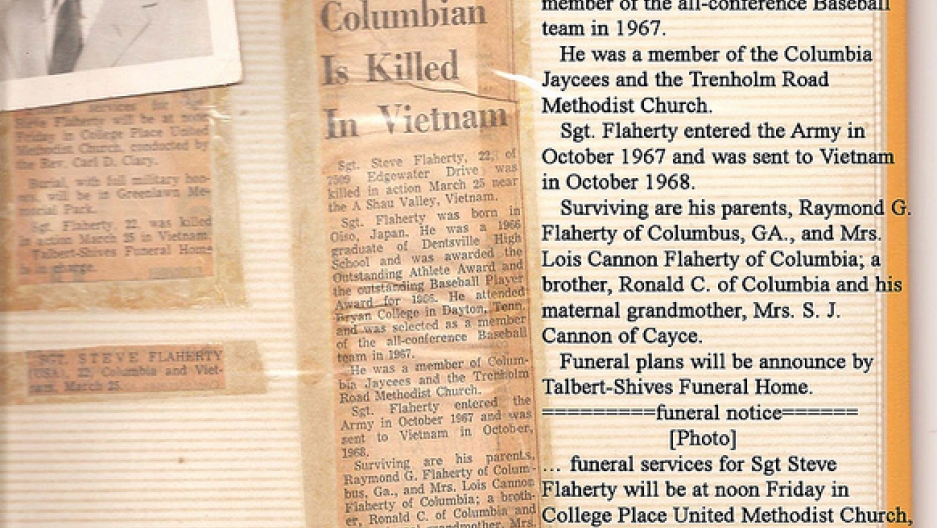 A copy of Sgt Flahertys obituary.

Share
Forty-three years ago, US Army Sergeant Steve Flaherty wrote a letter home to his mother from the jungles of Vietnam. On Saturday, his letters came returned to the United States. Sergeant Flaherty was born in Oiso, Japan, to an American father and Japanese mother. Ronald Flaherty, stationed in Japan with the US Army in the early 1950s, convinced his parents to adopt Steve after meeting him in a local orphanage. Steve came to the United States at the age of 9. He was raised in Columbia, South Carolina, and won acclaim at Dentsville High for his baseball skills. In 1966 he attended Bryan College in Tennessee on a baseball scholarship. His uncle, Kenneth Cannon, said that Major League Baseball scouts had contacted him, but he chose instead to enlist in the Army in October 1967. Flaherty joined the 101st Airborne Division and was sent to Vietnam in 1968. He wrote home telling horrific tales of booby traps and fallen comrades. One letter to his mother reads, "If Dad calls, tell him I got too close to being dead but I'm okay, I was real lucky. I'll write again soon." Flaherty was killed in the A Shau Valley on March 25, 1969 at the age of 22. Before Flaherty was declared dead by US officials, Vietnamese soldiers took the letters from his body retired Defense Department POW/MIA expert Robert Destatte suggested. Four unsent letters were confiscated from Flaherty's body and sent to Vietnamese Col. Nguyen Phu Dat, who was responsible for directing propaganda messages for Radio Hanoi. Dat would have lifted passages out of Flaherty's letters and read them on air in order to persuade American soldiers to refuse to go into battle, says Destatte. In 2011, Destatte noticed a mention of the unsent letters in an online magazine written by Dat on the website "Bo Dat Viet Online," which loosely translates to "The Vietnam Nation." Destatte worked with the Richland County sheriff's office to contact Martha Gibbons, Sergeant Flaherty's sister-in-law, and the rest of the Flaherty family. The letters were delivered to Defense Secretary Leon Panetta during his visit with Vietnamese Defense Minister Phuong Quang Thanh in Hanoi on June 4. It was the first official exchange of war artifacts between the two countries. In exchange, Panetta gave Thanh a diary of Vietnamese soldier Vu Dinh Doan, which was taken by US Marine Robert Frazure after Operation Indiana in 1966. Included in the transfer were letters written by two other American soldiers killed in Vietnam, but the Army Casualty Branch has will not release the identities of these soldiers until next-of-kin are located. The family received the four unsent letters on Saturday. The letters were addressed to Steve's mother, Lois; Mrs. And Mrs. Barnes, Flaherty's neighbors; the family of a classmate named Wyatt; and Betty Buchanan. Again, it was Robert Destatte who discovered the connection with Betty Buchanan. Betty was the younger sister of Coleen, a girl Steve had dated before leaving for Vietnam. Although Steve and Coleen ended things before he shipped off to Vietnam, Betty decided to remain in touch, and the two exchanged letters. The letters are historic in that they symbolize the first transfer of war documents between the two countries, and the Flaherty family plans to donate the letters to be displayed at the South Carolina State Museum. Wherever they end up, after 43 years, the letters will finally be home. Letter to Mother: "If Dad calls, tell him I got too close to being dead but I'm okay I was real lucky. I'll write again soon… Our platoon started off with 35 men but winded up with 19 men when it was over. We lost platoon leader and whole squad… The NVA soldiers fought until they died and one even booby trapped himself and when we approached him, he blew himself up and took two of our men with him." Letter to Betty: "We have been in a fierce fight with NVA. We took in lots of casualties and death. It has been trying days for me and my men. We dragged more bodies of dead and wounded than I can ever want to forget… Thank you for your sweet card. It made my miserable day a much better one but I don't think I will ever forget the bloody fight we are having… I felt bullets going past me. I have never been so scared in my life. Well I better close for now before we go in again to take that hill." Letter to Mrs. Wyatt: "This is a dirty and cruel war but I'm sure people will understand the purpose of this war even though many of us might not agree."