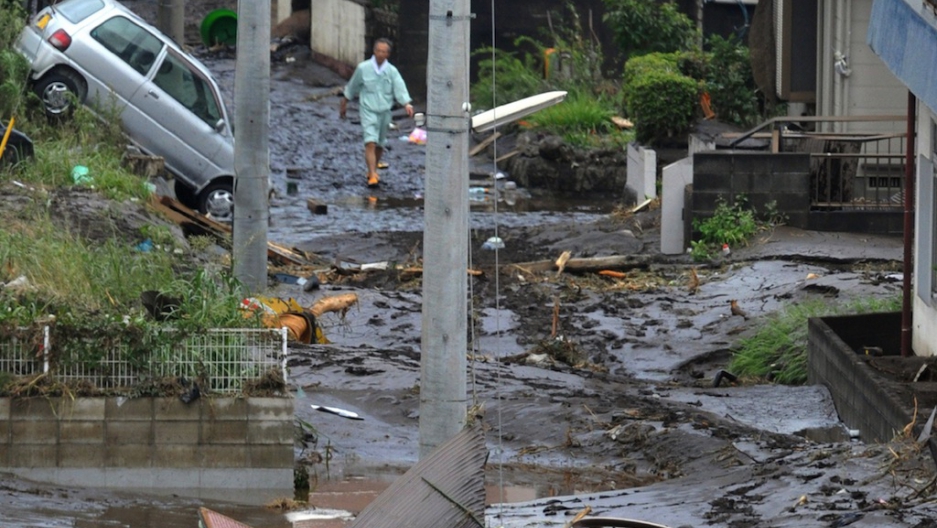 A man walks along a road covered in mud after heavy rains fell at Kumamoto city in Japan's southern island of Kyushu on July 12, 2012.
Credit: JIJI PRESS
Share

At least 17 people are dead, 20 are missing and 50,000 have been evacuated from their homes on Japan's Kyushu island due to record rainfall.

"Unfortunately, we believe the numbers (of dead and missing) will rise as we get more and more information from the field," a spokesman from Kumamoto prefecture told Agence France-Presse.

Emergency workers in the prefecture responded to numerous reports of mudslides burying house and trapping island residents, as well as blocking access roads, according to AFP. Some areas have seen nearly 100 millimeters (four inches) of rain falling in an hour.

"Particularly in Kumamoto and Oita prefectures, we are seeing the heaviest rain that (the region) has ever experienced," said the Japan Meteorological Agency, reported The Tokyo Times.

According to RT, the torrential rains had slowed at noon local time, giving rescuers time to start searching for survivors. Officials did warn, however, that more rain could be coming.

"We are increasing our alert level for rivers overflowing," a Kumamoto official told RT.

"I have heard that this is a record for heavy rainfall. We will take effective measures," he said in a legislative session.