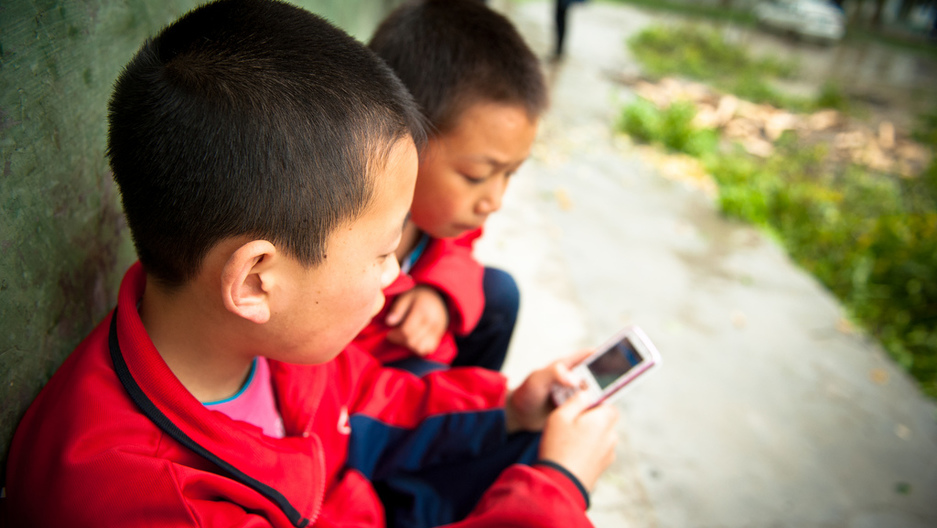 Elementary school students play a game on a mobile phone in rural China. (Photo by toehk via Flickr.)

Jack Wang remembers an odd new rule written at the bottom of the his high school writing exam in China: no Internet words.

"It's just natural right when we use it," he said. "It's the youth way of expressing ourselves."

What may seem like the petty irritation of an old-fashioned teacher might actually be something bigger. More than 500 million people are online in China. They are microblogging, instant messaging and texting.

And the Chinese language is changing as a result, says David Moser, an American linguist who lives in Beijing.

Moser says the Internet has become a place for people to play with Chinese, a language with a long history of puns and wordplay. It's the perfect language for puns because most Chinese words have multiple homophones, two words that sound similar but have different meanings.

"Because there are so many homophones there's sort of a fetish about them," Moser said. "As far as the culture goes back, you have cases of homophone usage and homophone humor."

Many forbidden or taboo words in Chinese are taboo precisely because they sound like another word.

"People would actually give her gifts or bribes for an auspicious phone number," Moser said.

Moser cites an example of a recent phrase he saw online alluding to Tiananmen Square. Only the author didn’t use the words "Tiananmen Square" or even 6/4, which refers to the date the incident took place. References to both words are censored online.

Instead, the author referred to the "eight times eight incident." Moser was confused when he first saw the reference.

The Internet is ripe with clever examples of how people evade the censors. However, censorship is just one reason people play with words online. Another is the very technology that enables people to type Chinese characters into their cell phones and computers.

Wang types the letters "jintian" on his phone. As he types the first three letters, "jin," a list of Chinese characters appear on the screen. Each character sounds just like the word for "today," but means something completely different. Wang points to each possible character and explains its different meaning: "gold," "clothes," "only" and finally, the character for "today."

Everyday, people are typing in a word like "today" and seeing all of the potential homophones for that word. This, says Moser, has fueled wordplay like never before.

"I think that's given rise to a lot more puns than would normally have been uttered in the earlier days when you had to just pull everything out of your head," he said.

People have gotten even more creative playing with this input system to intentionally create new Chinese slang, translating English phrases into pinyin and then into Chinese characters. The meaning of these new words can seem random, but they're not.

For example, the Chinese character for "glass" has come to mean "gay man." The slang term actually comes from an English phrase, "boy love." But the phrase was abbreviated into the English letters "BL." When people looked for a similar abbreviation in Chinese, they typed "BL" into their computers and out popped the character for "glass."

"Suddenly the word 'glass' was being used for male homosexuals," Moser said.

This casual indifference to the meanings of Chinese characters concerns some linguists like John Pasden, a Mandarin teacher who lives in Shanghai.

"We're getting weird mutations of the language mixing with English phasing in and out of Chinese and non-Chinese," he said. "This complete disregard for the meaning of the characters has some serious long-term implications if it keeps going on."

Pasden worries that once people divorce the meaning from the character, they will start questioning the usefulness of characters altogether. He says that could lead to a simplified phonetic writing system, like English.

For 19-year-old Wang, that’s not a problem. This new word play is the future.

"I think we should catch up with the time," he said. "If people use it, we should use it."