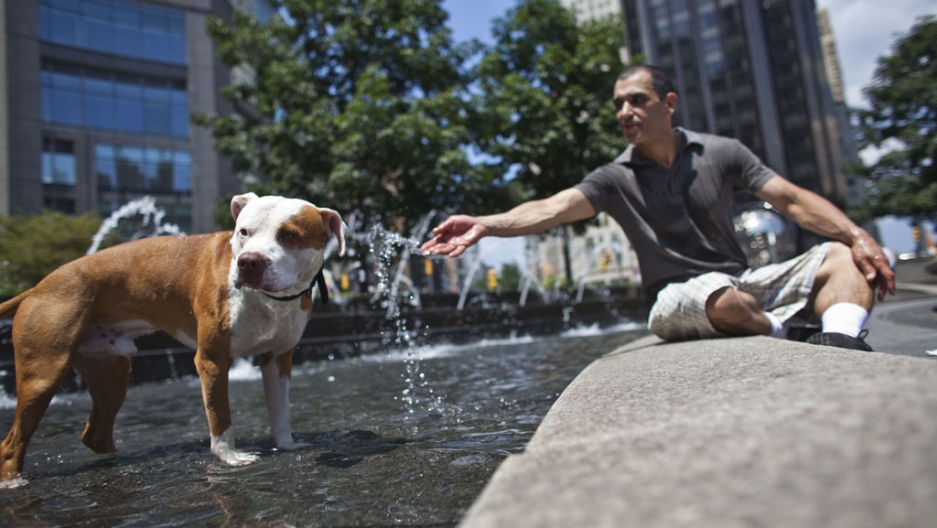 NEW YORK - JULY 12: Herb Nieves and his dog Max, a red nose pitbull, cool out in the Columbus Circle fountain during a heat wave on July 12, 2011 in New York City. The National Weather Service has issued a heat advisory as the heat index is expected to reach 100 in New York City. The city has kept cooling centers open to help residents beat the heat and humidity. (Photo by Ramin Talaie/Getty Images)
Credit: Ramin Talaie
Share

Dog lovers are in an uproar over a Belfast, Northern Ireland decision to euthanize an innocent dog - because he closely resembled a pitbull.

Seven-year-old Lennox - a large black dog with no history of biting - was seized in 2010 under the precepts of Northern Ireland's "Dangerous Dog" act, which has illegalized pitbull type dogs, deeming them to be unusually dangerous. Authorities declared the animal to be a public danger after a behavior evaluation, and ordered that he be euthanized.

The dog's owners staged a widely-publicized battle to save him, noting the dog had never attacked anyone and was unlikely to do so in the future. Owner Caroline Barnes publicly claimed the dog was an American Bulldog/Labrador Retriever cross, and does not have any pitbull ancestry.

Lennox's struggle soon gained international attention: protests in his name were held in Spain, New York City, and in Belfast, while animal lovers  from around the world inundated the Belfast Telegraph with messages of support. Supporters of the dog gathered over 213,127 signatures on an online petition to save him.

Read More: Arguments for and against breed-specific dog bans

Popular television dog trainer Victoria Stillwell also jumped into the fray, offering to adopt the dog and bring him to the USA - a request that was denied by the Belfast City Council. Stillwell, after watching video of Lennox's behavioral evaluation by the city, declared on her website that she did not believe the dog was dangerous.

Lennox's supporters were ultimately unsuccessful: in June, senior Northern Ireland judges rejected owner Caroline Barne's legal attempt to overturn the euthanasia order. The 7-year-old dog was "humanely put to sleep" late Wednesday. Lennox's owner, Caroline Barnes, told the Belfast Telegraph that her daughter was not given a chance to say goodbye to her pet.

A Belfast City Council spokesman defended the move to the Belfast Telegraph, telling media an expert had deemed Lennox to be "one of the most unpredictable and dangerous dogs he had come across."

"Over the past two years, Council officials have been subjected to a sustained campaign of abuse including threats of violence and death threats," the spokesman added.

Many critics of breed specific legislation, such as the "Dangerous Dog" act in Northern Ireland, point out that it's often very difficult to determine if a dog is a pitbull or not - and that poorly behaved dogs tend to be made, not born.

Supporters claim that banning dog breeds often involved in dog-bite cases is necessary for the safety of the public, especially children.