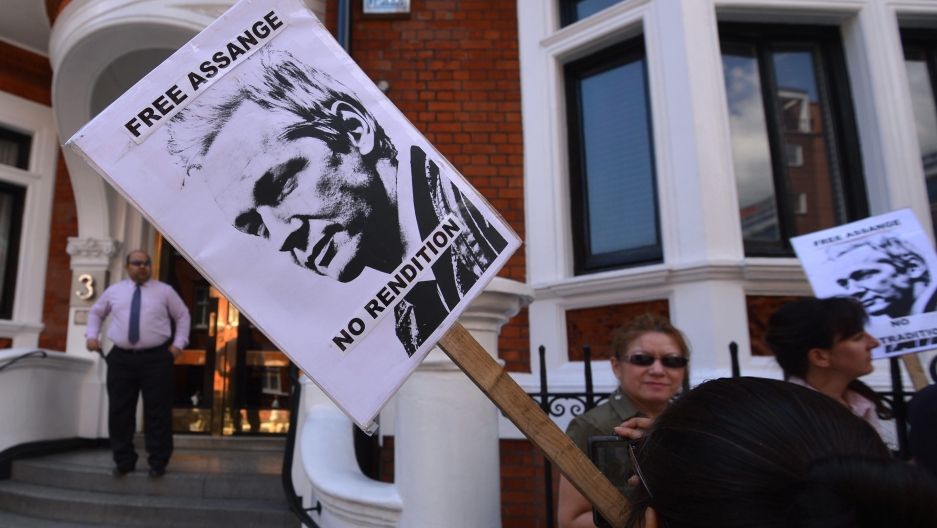 UPDATE: Ecuador's government has granted Julian Assange asylum, but he remains holed up in the South American country's embassy in London.

Due to be extradited from the UK to Sweden for questioning over alleged sexual offenses, last month Assange breached his bail conditions to seek refuge in Ecuador’s London embassy.

Since then he has refused to leave and has requested asylum and even Ecuadorean citizenship from Correa’s left-wing administration, which, like Assange, has an antagonistic relationship with Washington.

This week, Ecuadorean newspaper Hoy quoted Correa as saying: “If Assange’s life is at risk, these things would be a cause for granting asylum.” Controversially, he then went on to add: “In the United States there is the death penalty for political crimes.”

That was a clear allusion to Assange’s claims that he could face execution if extradited from Sweden to the United States where, he says, there is a sealed indictment against him for leaking classified secrets.

“We will consult with whomever we have to consult with, but we are not going to ask permission from anyone to make the sovereign decision to grant or not to grant asylum to the Australian citizen Julian Assange,” added the president.

For Correa watchers, that last assertion could hardly have been more redundant.

The idea of the burly, charismatic president — who appears to thrive on conflict — lying awake at night in a cold sweat over Assange’s surprise residency at the London embassy could hardly be less plausible.

And if Correa does give permanent refuge to Assange, it would only be the latest chapter in a series of confrontations over Washington’s alleged imperialist agenda that has left officials in the White House gritting their teeth.

Over the years, Correa has refused to renew the lease on the Manta air base, the Pentagon’s only military base in South America, and even expelled the US ambassador to Quito.

That diplomatic spat was triggered, not coincidentally perhaps, by WikiLeak’s revelations that the ambassador had claimed in diplomatic cables that Correa had knowingly appointed a corrupt police chief.

And just last month, Correa was threatening to kick USAID, Washington’s international aid agency, out of Ecuador over claims that its democracy-strengthening program was aimed at destabilizing his government.

“Relations with the US are already seriously damaged,” Juan Carlos Donoso, a politics professor at Quito’s San Francisco University, told GlobalPost. “Giving asylum to Assange would just be one more stripe on the tiger.”

Assange and Correa have already met. They appeared to get on famously when the WikiLeaks founder interviewed the Ecuadorean president for The World Tomorrow, his English-language show on state-run Russian TV.

At the end of the meeting, Correa even joked to Assange: “Welcome to the club of the persecuted,” an apparent reference to Correa’s own battles with independent media in his country.

Nevertheless, the asylum decision is no foregone conclusion.

Since first being elected in 2006, Correa has shown a willingness to pick fights not just with Washington but also with many of his own left-wing supporters. They include environmentalists and the indigenous movement that helped sweep him to power.

The wrath of Assange’s global backers would be water off a duck’s back to Correa if he calculated that rejecting the WikiLeaks founder’s asylum bid was best for his government.

Either way, Assange’s star has fallen precipitously since WikiLeaks first rocked the world in 2010, releasing thousands of US diplomatic cables relating to highly sensitive issues including the war in Afghanistan.

Since then, he has fallen out with the major newspapers in France, Germany, Spain, the UK and US that had originally collaborated with him, largely over Assange’s refusal to redact sensitive details.

According to his detractors, he thus revealed the names of hundreds of US allies around the world, such as anti-Al Qaeda informers, placing their lives at risk and prompting withering criticism from WikiLeaks’ erstwhile collaborators.

WikiLeaks gathered some following in Latin America, where it partnered with news organizations to publish piles of diplomatic cables that took aim at countries in the region, including Ecuador. But media in the region also chose not to publish cables leaked to them, in some cases because the correspondence contained sensitive references to their own operations.

The self-styled freedom of information champion’s choice of Ecuador — regarded as having the second-worst record, after Cuba, on press freedom in the Americas — as his refuge from prosecution in Sweden has also tarnished his image.

And should his asylum request be granted, legal experts say he would still be liable to arrest by British police the moment he leaves the embassy to head to an airport for a flight to Ecuador.

In other words, Assange faces years, possibly even the rest of his life, holed up in the embassy.

“Half of all Ecuadoreans have no idea who Julian Assange is,” notes Donoso, the professor. “He simply is not as important to Ecuadoreans as day-to-day issues such as the economy.

“But he could be useful to Correa in allowing him to shore up his left-wing credentials ahead of next year’s presidential elections. The only thing we can say for certain is that Correa will not be afraid to make the decision, whatever it turns out to be.”