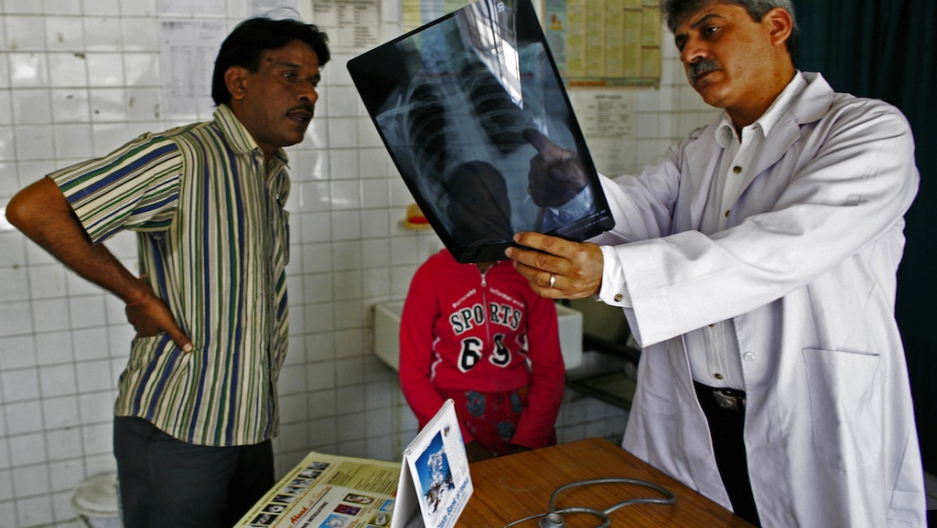 India has a bigger stake in finding a better treatment for TB than any other country in the world. Yet until recently, obstacles hindered Indian scientists' efforts to conduct cutting edge research.
Credit: Findlay Kember
Share

NEW DELHI, India — Facing nearly 2 million new tuberculosis cases every year — more and more of them drug-resistant — India has a bigger stake in finding a better treatment for TB than any other country.

The reason? India's university professors are bogged down with teaching, and few have the laboratory facilities needed to do cutting edge work. And every year, more of the best minds are lured away by the pharmaceutical industry — which has little interest in TB, from which there is little money to be made.

But a pioneering effort to discover new drugs using the “open source” model prevalent in the software industry could change that.

“When the economies of the developing countries are doing well, is it not time to address some of these neglected diseases?” said OSDD director T. Balganesh, former CEO of pharmaceutical company AstraZeneca India.

“It's very clear: If you don't do anything, don't expect the Pfizers and AstraZenecas of the world to solve the problem.”

More from GlobalPost: Coca-Cola to invest $5B in India by 2020

The OSDD hasn't had to spend much money so far. In its first four years, the open source network has drawn only around $3 million of about $10 million in funding allotted by the Indian government, as early projects involved mainly time from researchers. But spending is ramping up.

“The more expensive activities are just picking up now,” Balganesh said. “For the next five years, we are in the ballpark of about 700-800 crores [US$130-$145 million], and I believe a big chunk of that will be involved in the clinical trials that we are organizing.”

On March 24, 2012, World TB Day, OSDD announced it will conduct Phase II-b clinical trials for a new TB drug in India in conjunction with the Global Alliance on TB — signalling that the race is on.

“We desperately need new TB drugs and therefore any initiative in this area is welcome,” said Dr. Madhukar Pai, a professor at McGill University's Department of Epidemiology & Biostatistics who has worked extensively on India's TB problem.

“In particular, it is great to see the Indian government investing in this effort. After all, TB continues to be a huge public health problem in India, and the emergence of severe forms of drug resistance increases the urgency for new TB drug development.”

So far, the OSDD network has roped in around 6,000 scientists, 80 percent of them Indian, from some 130 countries. Along with the Global Alliance on TB, it's formed partnerships with around 40 Indian universities and multinationals like AstraZeneca, Hewlett-Packard, Infosys and Sun Microsystems. And in addition to the TB treatment it's testing with the Global Alliance, the network also has two more anti-TB molecules in advanced stages of research, and has nascent programs in the works for malaria and Leishmaniasis — a potentially fatal disease transmitted by certain species of sand fly.

While Balganesh cautions that drug discovery is a long haul, some spinoff benefits of the program are starting to materialize. To distinguish OSDD from the plethora of granting agencies that offer scientists funding, the network aims to offer its researchers capabilities that aren't readily available in the Indian university system.

“We're not just giving money away,” said Balganesh. “If you're working on an anti-microbacterial project, all these capabilities will now become available to you free of cost. This will then entice people in the universities, who don't have these capabilities, to get involved. Even small colleges, people who have good ideas.”

For example, OSDD is tapping chemists at laboratories across the country to develop a library of compounds with novel structures that will be freely available for researchers working on any disease — a plan that has already attracted interest from Balganesh's former colleagues in big pharma. It has also set up a central laboratory for anti-microbacterial testing — which is not available at university labs because it requires special containment facilities.

In another effort, Balganesh is working on hiring a contract research organization that will allow biologists to outsource their chemistry work. And OSDD has already done complete gene sequences for 100 strains of clinical and drug-resistant TB, and has contracted a small college to clone specific genes on demand from network researchers. That means that its students master cloning and sequencing, and OSDD researchers can get clones overnight.

The idea is to leverage the strengths of the open source model – the human resources available in the academic world — to overcome the public system's chronic shortage of funds.

“The ability to take risks with projects is limited in the pharma world. Time's a constraint, money is a constraint, resources are a constraint,” said Balganesh. “[Here] the risks are not lower, but because of the creative challenge you can take high-risk projects. The scientists are willing to invest their time because it's appealing, and if you crack it, it's a publication.”

In other words, where companies like Pfizer and AstraZeneca have billions of dollars to spend, they're very jealous of that money, because so few drugs ever make it to market, and they devote precious little to diseases that won't pay even if they can be cured. The biggest advantage that OSDD has is scientists that are, essentially, willing to work for free.