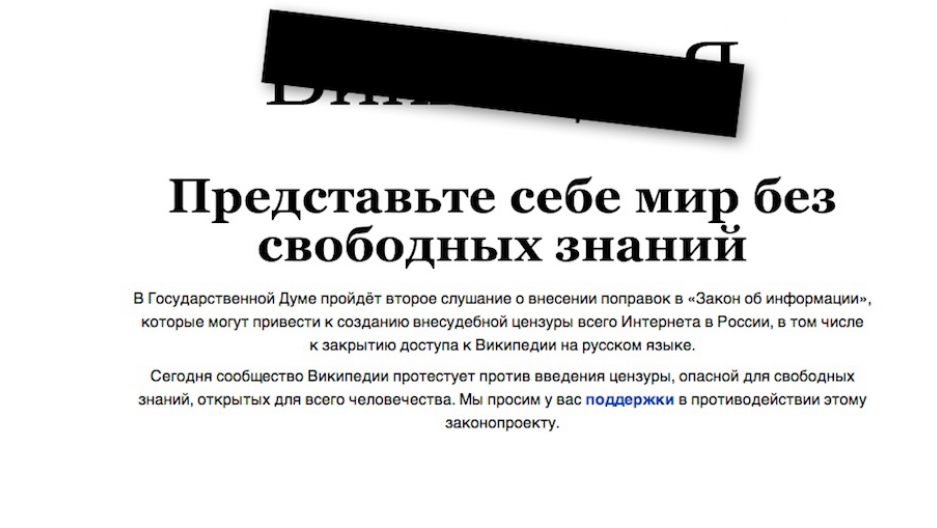 Visitors to Russia's Wikipedia site Tuesday are greeted with this message protesting a proposed censorship bill being reviewed by the state Duma.
Share

Wikipedia shut down its Russian language site on Tuesday in protest of a proposed Internet censorship law, the Associated Press reported.

Visitors to the site ru.wikipedia.org are met with a black "censored" bar over the Wikipedia logo and a message, which was translated by BBC News.

"The State Duma is expected to hold a second hearing about amendments to the Information Act, which could lead to the creation of extra-judicial censorship of the entire internet in Russia, including banning access to Wikipedia in the Russian language," the message reads.

"Today the Wikipedia community voices protest against the introduction of censorship, which is dangerous for the freedom of knowledge - something which must be open-access for all mankind," it continues.

The censorship bills, which will be reviewed by the state Duma on Wednesday, would allow the government to blacklist certain websites, with the aim of protecting Internet users from harmful content such as child pornography and substance abuse sites, CNN reported.

Activists who oppose the law, however, have likened it to the Russian equivalent of “the Great Chinese firewall,” the Washington Post reported, and argue that Wikipedia would most likely be censored should the legislation pass.

Russia has become accustomed to free access to the Internet: according to a poll released in June cited by the AP, only 10 percent of those polled in Moscow said they did not use the internet, and 38 percent use the Internet every day —up from 22 percent just two years ago.

This is the third time Wikipedia has shut down to protest Internet censorship, the Atlantic reported.

The Italian version of the site shut down in October to oppose to a censorship bill proposed by Silvio Berlusconi, and the English-language version did the same in January to protest the controversial SOPA/PIPA legislation then under consideration in Congress, according to the Atlantic.