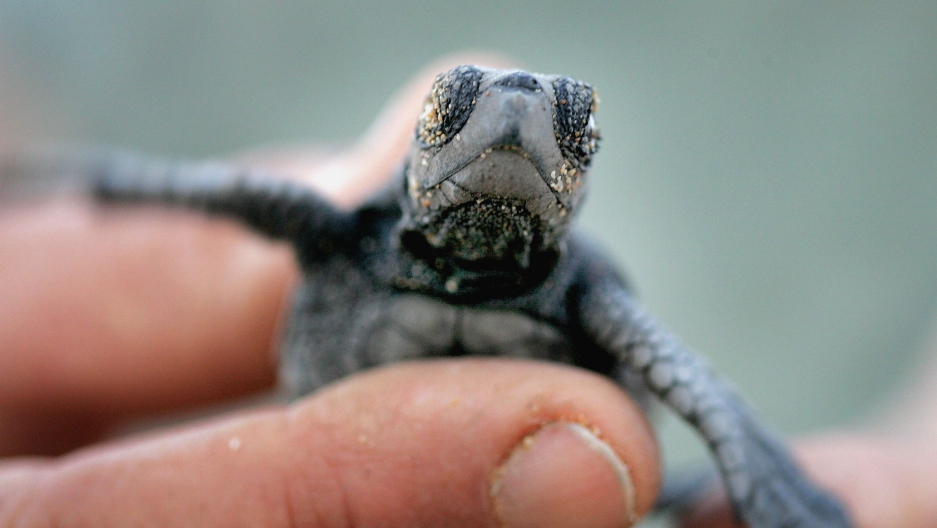 A new study found that climate change is a growing threat to the survival of baby sea turtles.
Credit: David Silverman
Share

As many as 20,000 leatherback turtle eggs and hatchlings have been crushed by bulldozers on the northern coast of Trinidad.

The turtles were killed when workers attempted to redirect a river that was eroding Grande Rivière beach, which is located in front of a hotel where tourists go to watch the sea creatures, according to BBC News. Environmentalists said the workers botched the job on the mile-long stretch of beach — considered to be a leading nesting site for the world's largest sea turtle — leading to the mass deaths.

Sherwin Reyz, a member of the Grande Rivière Environmental Organization, said the 20,000 eggs were crushed by the Ministry of Works bulldozers or consumed by vultures and stray dogs, reported The Guardian.

"They had a very good meal. I was near tears," said Reyz, who helped save hundreds of uninjured hatchlings dug up by the heavy machinery. "It was a disgusting mess."

Leatherback turtles can grow to more than seven feet long and can weigh up to a ton, according to The Telegraph. Living to 100 years, the turtles return to the same beach where they were born to lay their eggs. Grande Rivière is so popular among turtles as a nesting ground that some females accidentally dig up the eggs of others while digging their own nests.

Italian hotelier Piero Guerrini, who had been asking Trinidad's government to redirect the river for months, was shocked and dismayed by what happened, reported The Guardian.

"For some reason they dug up the far end of the beach, absolutely encroaching into the good nesting areas," Guerrini said. "This could have been avoided with a much wiser approach. But it was done too late and it was done in the wrong way."

Guerrini also said his hotel was full of tourists who had come to Trinidad to see the turtle hatchlings climb from their sand nests and head to the ocean, according to The Telegraph. Instead, they saw the tiny leatherbacks crushed by the bulldozers and eaten by vultures and dogs.

"This really put a lot of bad images in people's minds," Guerrini said.

According to BBC, the government has so far not commented on the incident.