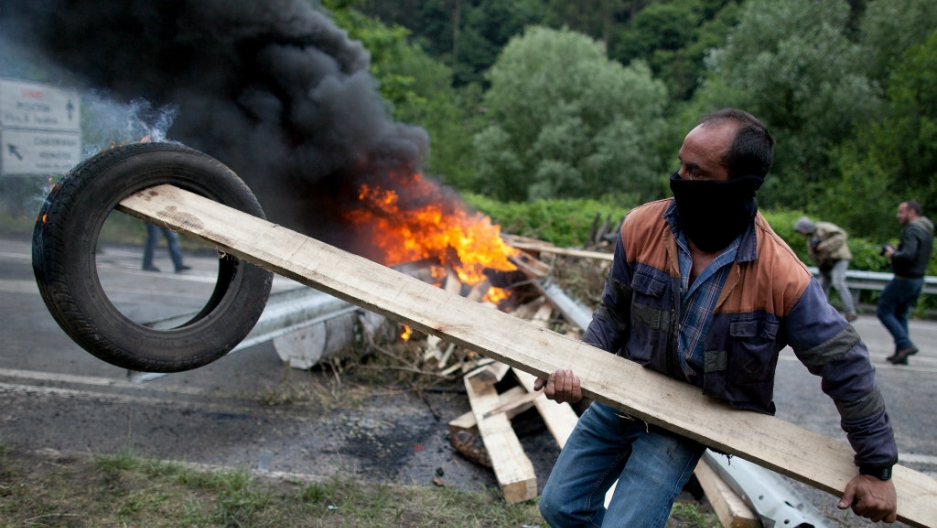 A Spanish miner holds a burning tire next to a barricade near Santiago mine.
Credit: Pablo Blazquez Dominguez
Share

LANGREO, ASTURIAS, Spain — For more than 40 days, 14 men in the north of Spain have spent their days and nights in dark shafts, 3,000 feet underground. They are not trapped. Instead, these miners have voluntarily locked themselves in the depth of the mines to protest against the massive government cuts to the sector.

“He tells me he is doing this for our son,” said the wife of miner Dario Martinez, Elisabeth, who is caring for their nine-month old boy in the nearby small town of Langreo in the Asturias.

Dario Martinez, 30, has been living for more than a month inside Candin shaft in a claustrophobic 270 square foot chamber. The temperature is about 77 F degrees but the humidity ranges between 80 and 100 percent and there is plenty of dust in the air. They have no toilets or showers, sleep on planks and eat what their colleagues from the surface send them four times a day via a service elevator.

“They are determined to stay down there until there is a solution from the government, but I worry that he will get sick,” said Elisabeth.

Like the Martinez family, more than 10,000 others in the coal mining regions of Spain worry they might soon be unable to feed their children. The entire sector has been on general strike since May 28, following an April announcement by the conservative government of President Mariano Rajoy that it would cut subsidies slated to be received this year by 63 percent — the sharpest cut in the budget to any program.

Without public aid, the mining industry and the villages that depend on it are doomed to disappear, and quickly.

Coal mining in Spain is a loss-making sector that has been publicly subsidized for more than a century. It has been traditionally regarded as a strategic industry because it is the only local resource in a country with an energy dependency of 81.7 percent (30 points above the EU average).

With economic modernization and changes to Spanish industry that took place in the late 1980s, the mining sector became less important. The number of miners in Spain shrunk by 90 percent over the past 20 years. Even so, the sector is essential for the survival of certain towns like Langreo, which is almost fully dependent on coal mining.

In 2010, then-President Jose Luis Zapatero signed a plan to cut the subsidies by 10 percent in 2012 but the current government decided to increase that six-fold resulting in a total reduction of more than 200 million euros.

The Ministry of Industry, Trade and Commerce justifies the reduction in the context of the EU demands to reduce the public deficit by six percent by the end of the year. Spain has been in recession since the end of 2008, and has one of the most troubled economies in Europe, with a 24.3 percent unemployment rate. It recently requested a bank bailout worth 62 billion euros.

Regardless, the miners say a deal is a deal.

“All we are demanding is for the government to respect what was agreed on, approved by the EU, and signed by all the parties affected,” said Manuel Robles, Union General de Trabajadores representative of the Candin shaft. He says miners would accept some cuts but not something “so radical.”

Although miners believed that their colleagues underground would be their trump card to pressure the government, it is their “armed” actions that have been receiving the most publicity.

Black columns of smoke stain the blue skies of bucolic Asturias. Almost daily, burning tires block roads, highways and railways for hours while dozens of policemen fight with miners in the forest.

“We are not attacking, we are just defending our jobs and the future of our children,” said Robles, 35, who is the third generation of miners in his family.
On Wednesday, 200 men fought for hours against riot police squads on the roads and hills of this mountainous region. Two miners who did not want to be identified out of concerns for their personal safety told GlobalPost that they are using guerrilla war strategies. They hide in the forest and use small home-made mortars to shoot rudimentary but effective ammunition, ranging from golf balls and powerful firecrackers to pepper and cayenne. The footage of these violent protests has spread around the world, portraying a climate of tension and unrest that doesn’t help Spain in the international markets.

But the Spanish government's actions to address its crisis in one sector have left bitterness in another.

“The government doesn’t have 200 million euro to guarantee the survival of our jobs and villages, but funnily enough, it has 23 billion euros to rescue Bankia,” said Robles, referring to Spain's fourth largest bank.

And analysts say that the timing is off.

“This cut will be a death sentence for these regions,” said Jose Maria Garcia Blanco, a sociology professor at Oviedo University in Asturias who specializes in the transformation and decline of industrial areas.

In the past two decades, the Spanish government has spent hundreds of millions of euro to reconvert and reindustrialize the mining regions, but those plans have failed, forcing the state to continue subsidizing the production of coal.

“Many of the companies created with those subsidies have gone bust,” said Blanco, who complains the government didn’t oversee their programs carefully enough to determine whether it was investing in sound projects.

No other jobs available

Aside from trying to reindustrialize the area and training people to do other jobs, for many years, public subsidies were handed out with the goal of lowering the price of Spanish coal in order to make it competitive against South African, Colombian and Indonesian exports. But since 2001, with developing countries like China entering the international markets, the demand for coal has soared and, therefore, the price for foreign coal has increased.

According to Carbunion, the umbrella organization for coal mining companies, Spanish coal is now about 15 percent cheaper than imported coal if total costs are considered, including extraction and transportation.

In 2010, the European Union also decided that member states could not continue subsidizing coal mines beyond Dec. 31, 2018, and that only self-sufficient companies would be able to continue operating.

Mercedes Martin, general director of Carbunion, says the government is choosing the wrong energy strategy for the country.

“Coal thermal power stations guarantee the [continuous] running of the electrical system in periods of high demand,” she said. “Renewable energies cannot be relied upon to provide [a continuous supply] because they depend on the weather,” Martin said.

More from GlobalPost: Another blow to Spain: Moody's cuts ratings on 28 Spanish banks

The International Agency of Energy estimates that the consumption of coal will increase by 65 percent in the next few decades, and countries like Germany are considering reopening new mines. Moreover, the reserves of coal in Spain will last a century, long after gas and fuel reserves in the world are predicted to be exhausted.

The general director of Carbunion says that with the subsidies planned by Zapatero’s government until 2018, the sector had been investing heavily to make mines profitable without public aid. With Rajoy’s cuts, she says companies will have to close down because they won’t be able to pay for the investments they have already made.

“The situation is reaching a point in which I don’t know any more what the government’s motivations [for the cuts] are,” admitted Martín.

For the miners, the reason behind the drastic reduction in subsidies is clear.

“We represent the last bastion of a very well organized working class,” said Lisardo Suarez, a miner for 18 years at Maria Luisa shaft in Ciano.

Others add that the miners have long been leaders of revolts.

“We have been the spearhead of the worker’s movement throughout the 20th century when some of the workers uprisings during the dictatorship were started by us,” Robles added.

In 1962, during Franco’s dictatorship, miners dared to go on a strike to claim more labor rights and better salaries. The protests spread throughout the country and received a lot of support abroad.

With the past in mind, miners say that the government is afraid their current protest “could act like gunpowder across the country, turning into a massive uprising by all the citizens in Spain and in Europe,” said Juan Carlos Liebana, Comisiones Obreras union representative for the mining sector.

“I believe that behind the cut there are politics,” he said. “The government sees in the current context the ideal opportunity to go forward with a coupe de grace against a whole political and social framework that is hostile against conservative parties.”

In fact, the mining sector has traditionally voted left and it is the most unionized in the country: almost 100 percent of workers are part of a union.

“They have a very strong capacity to mobilize people socially and politically and that has given them a huge power to pressure governments,” Blanco explained. “That’s what has kept this making loss industry alive throughout time.”

In order to inspire the rest of workers, miners are fighting for their jobs on yet another front. Since the end of June, about 200 men have been marching on national roads to cover the 280 miles that separate their mines from the capital Madrid. Dressed in helmets and uniforms, they are warmly and massively welcomed in the villages they traverse, greeted by the blaring of horns of passing drivers.

“People are inspired by us because they realize this is not only for the mining sector,” said Jose Manuel Alves, one of the marchers. “They identify and realize that they should be doing the same, that they should have our strength and determination.”

On July 11, thousands of miners arriving from all corners of Spain will join the marchers on their way to the headquarters of the Ministry of Industry. Robles says they won’t leave till the government backs off the cuts.

Still, despite several meetings with the unions and Carbunion, conservatives are not willing to negotiate over one cent of the 2012 budget. The minister of industry insists that he would be happy to talk about the 2013-2018 period but miners refuse to give up 2012 as lost.

“We have to defend our present in order not to jeopardize the future,” Robles said.