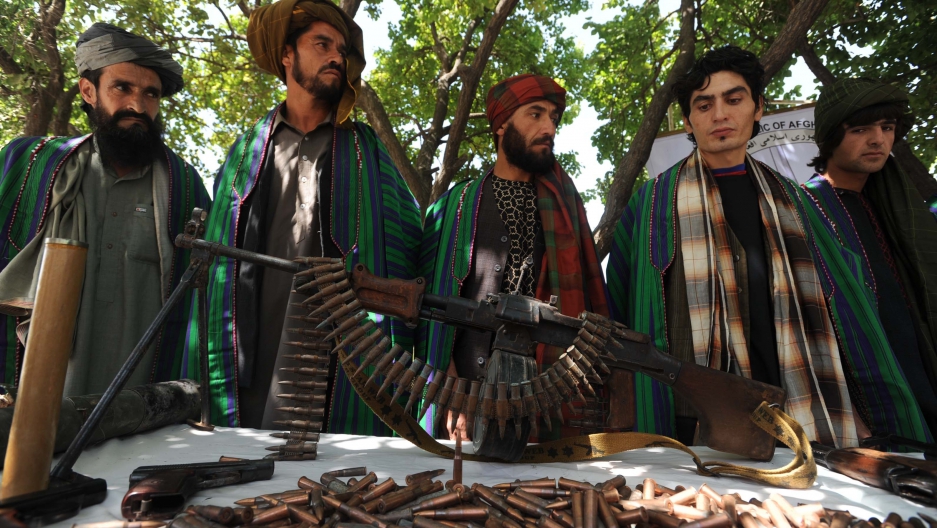 An Afghan woman was publicly executed, reportedly owing to a dispute between two Taliban commanders over her, and a three-minute amateur video of the killing has sparked an international outcry.

The video, obtained by Reuters, and a version of which can be viewed here, purports to show a crowd of men cheering and shouting "God is great" as a suspected member of the Taliban fires nine shots into a burqa-clad figure with an AK47 rifle.

As the figure slumps to the ground, the men covering a nearby hillside praise the "mujahideen," their own term for the Taliban.

Afghan officials believe that the woman, thought to be named Najibia, 22, was subjected to the execution in Qimchok village, in Afghanistan's Parwan province because she was married to one Taliban commander while having an affair with another, Al Jazeera reported.

Qimchok is only an hour's drive west of Kabul.

Parwan province governor Abdul Basir Salangi told CNN that as both Taliban men "had some kind of relationship with the woman," they opted to accuse her of adultery to "save face."

A man in the video is heard saying that the woman should be executed in the order of Allah because adultery is wrong.

Reuters cited authorities in Kabul as directly blaming the Islamist group, adding that provincial Governor Basir Salangi said: "When I saw this video, I closed my eyes ... The woman was not guilty; the Taliban are guilty."

He said the killing occurred eight days ago.

However, a Taliban reportedly dismissed claims of the killing: "We have no operational update about this," Zabihullah Mujahid said.

Locals and foreign forces fear a return of the Taliban's brutal behavior when it ruled Afghanistan between 1996 and 2001, and it raised concern about the treatment of Afghan women 11 years into the NATO-led war against the Taliban.

The New York Daily News pointed to a Human Rights Watch’s 2012 report which claimed nearly nine out of 10 Afghan women were subjected to physical, sexual, or psychological abuse — including forced marriages — at least once in their lifetimes.

Hamid Karzai's government has been criticized for a spike in violence against women over the last year.

Fox News cited a statement by Gen. John R. Allen, the ISAF commander, as saying statement: "Let's be clear, this wasn't justice, this was murder, and an atrocity of unspeakable cruelty. ISAF stands with the people of Afghanistan. ISAF stands with the women of this noble country. I am encouraged by the increasing number of people standing up to the oppression of the insurgency in various areas across Afghanistan. We are with you."

Agence France-Presse quoted British Foreign Secretary William Hague as saying: "I am shocked and disgusted by [the] reports. Such deplorable actions underline the vital need for better protection of the rights of women and girls in Afghanistan."

The British government has called on Afghanistan's rulers to bring the perpetrators to justice.