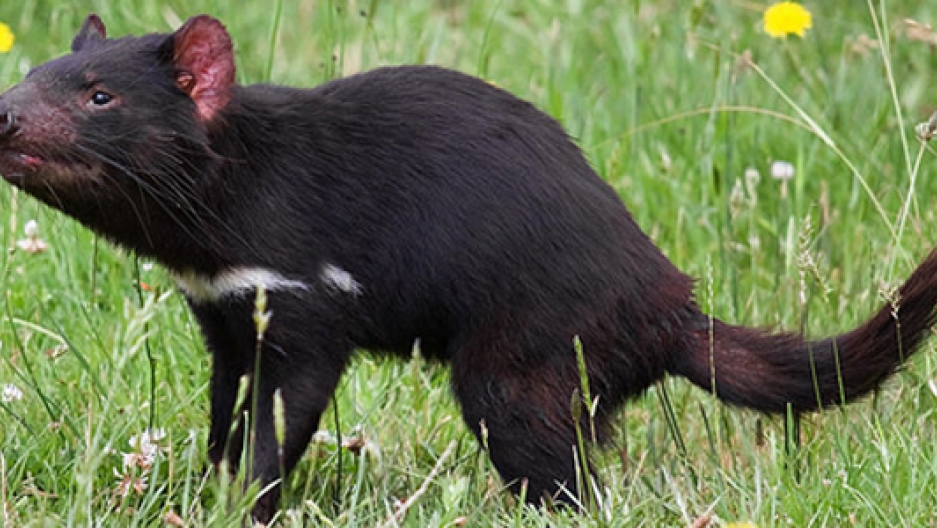 Researchers in Australia want to re-introduce native predators such as the Tasmanian Devil to the country's landscape. (Photo: JJ Harrison/Wikipedia)

Share
It is a sound that hasn't been heard in the wild on Australia's mainland for centuries – the screech of a Tasmanian devil. But researchers at Deakin University in Melbourne believe the devil, one of the country's most cantankerous creatures, could be part of the answer to Australia's ongoing battle to control invasive species. Since European colonization, introduced species such as cats and foxes have drastically altered the Australian environment, resulting in the world's highest mammal extinction rate. "So species like foxes, cats, rabbits, cane toads, camels have just changed fundamentally the face of Australia," said Rebecca Spindler, a conservation specialist at Sydney's Taronga Zoo. "And our native species are not able to compete with a lot of those species and they're also not as predator-aware as they need to be to be able to run away from those really very, very effective pest predators that have come in." Controlling these newcomers has been an ongoing struggle. It relies heavily on methods like poisoning, fencing and shooting. But these efforts have largely failed to limit the damage. The country's millions of foxes, for instance, have become an unmitigated environmental disaster. That's why attention is now turning to the Tasmanian devils. The weasel-like carnivorous marsupials disappeared from mainland Australia long before the arrival of Europeans. But they've held out ever since on the island of Tasmania. And Deakin University ecologist Euan Ritchie said there is evidence that the devils have helped to keep pest populations there in check. "Foxes have been attempted to be introduced to Tasmania many times before, but the reason why they haven't established themselves is because of the presence of devils," said Ritchie. "That's good evidence for why you might want to think about bringing devils back to the mainland to control foxes." Ritchie said he thinks there is also potential in another indigenous predator, the fearsome dingo. The native wild dogs have been eliminated in much of Australia, but they still prowl some parts of the country. "There is quite strong potential that the dingo could be quite effective at controlling cats and foxes, and things like kangaroos on the mainland," he said. "And the devils have been doing quite a good job in controlling other things in Tasmania. So the idea, of course, is to actually use these predators to our own advantage." Ritchie concedes that repopulating parts of Australia with dingoes is a "radical" idea that would be opposed by some – sheep farmers, for example. But supporters say it would bring a "cascade of benefits," including curbing the numbers of kangaroos and goats that compete with livestock for food and water. And they say the American experience with reintroducing wolves and other predators to places like Yellowstone National Park shows that such ambitious schemes can work, despite local opposition. Researchers would have to carry out small trials here in Australia to know if the idea would work with dingoes and Tasmanian devils. And they'd also first have to overcome another challenge. Senior keeper Nick de Vos pointed out a young Tasmanian devil at Sydney's Taronga Zoo. It's here because it turns out that the devils themselves are endangered. In recent years the feisty marsupials have been hit by a mystery cancer that is devastating the wild population on Tasmania. While researchers struggle to get a handle on the disease, there's a nationwide effort to establish healthy captive populations. "Taronga is part of a broader insurance program, which is basically put together to save the species against extinction in the wild," de Vos said. If the captive breeding program is successful, some of the young devils could then be reintroduced to the wild of mainland Australia for the first time in hundreds of years. As for how the public would respond to the idea, supporters acknowledge that neither the dingo nor the noisy Tasmanian devil are as revered here as the devils' cuddly marsupial cousins the koala. But they say public opinion is likely to be supportive, because most Australians understand that the natural world needs its apex predators.