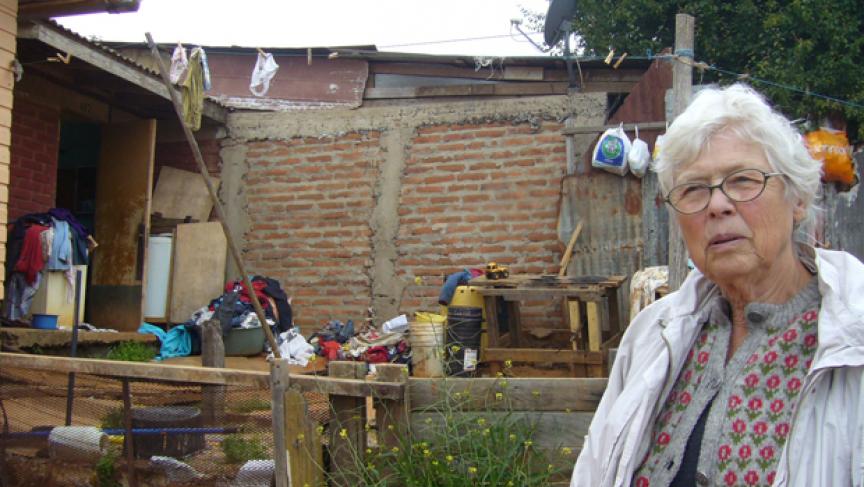 Anne Hansen is the Danish founder of Libro Alegre.

In Valparaiso, a city on the coast of Chile, a small library is working to introduce local children to a new universe of books.

The library is called Libro Alegre, which means ’Happy Book’ or ‘Cheerful Book.’ It is a happy place, stuffed with dolls, legos, and one of those toy kitchens with plastic food.

First and foremost, though, it’s a library that’s stuffed with stories.

“It truly, genuinely, is a unique collection of books,” said Imogen Mark, a volunteer at Libro Alegr.

Mark is British but has lived in Chile for years. She explained that people donate books, mostly from Scandinavian countries. The books then get translated into Spanish. Finally those translations are printed out and pasted into the books, right over the original Danish or Swedish or English text.

“So they’re recycled books, but they’re books that really don’t exist anywhere else in Chile” she said.

The library is actually in two places now: Most of the books are in the main building, in what you might call the touristy part of Valparaiso, not far from the harbor. There’s also a collection of books high up in the hills above the city, in a poor neighborhood called Montedónico.

You reach it by taking a bus up a steep, windy road. It’s a part of Valparaiso that could seem sad if you were just passing through. Thick clouds settle on the ground like they’ve given up.

But in the courtyard of a small medical center there are three red shipping containers. They open up to reveal a local branch of Libro Algre. The containers arrived from Denmark last April, loaded with books. They’d also been kitted out for story-time. Kids can pick a book from a shelf, find a seat, and get into a good story.

Librarian Evelyn Badilla, who runs this outpost of Libro Alegre, said that the kids see themselves reflected in these books.

“They’re surprised when they recognize themselves that way,” she said.

The whole operation is the brainchild of a Danish retiree named Anne Hansen. She is a former teacher who used to live and work in Chile. After she returned to Denmark in the mid 1990s, Hansen had her big idea.

“There was an enormous gap,” she said, “and I thought let’s start a library and let’s see what will happen!”

Hansen saw that there were very few books available to children in Valparaiso. And she didn’t want them to miss out on the experience of sharing a great story.

Mark says the books Hansen brought over also introduced a new kind of storytelling to this part of the world. Chilean books for children, she says, still tend to be stuck in the 1950s: They’re intended to improve the reader, to teach a child something, usually a moral lesson.

There are few Chilean books that simply tell a story from a kid’s point of view, like ‘Where The Wild Things Are’ by Maurice Sendak, one of many American books in the library that’s received the translate, print and stick treatment.

Libro Alegre began with a collection of fifty books. Over the last decade, the team has translated some 1500. Mark is aware that more often than not, the kids portrayed in the picture books are blond haired and blue-eyed and the pictures show European or American homes.

“That sometimes is a bit troubling for us,” she said.

But the themes are universal. What happens when your grandfather dies? Or how do you feel when you go to school and you don’t have any friends?

The most popular books in the library, Mark said, are the ones featuring Spot the dog. But there’s another one, a German book, that kids gravitate towards.

It’s called ‘The Mole Who Wants To Know Who Has Pooped On His Head.’

The kids at Libro Alegre are just like kids everywhere: They love the book because they get to say the word ‘poop’ a lot.