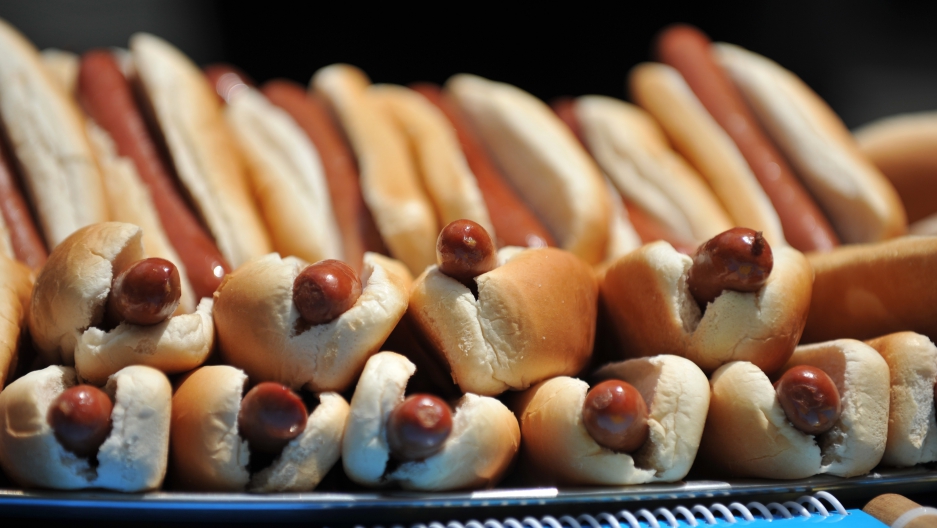 Americans have heavy, conflicted ideas these days about where the country should be heading. That might make for tough conversation over hot dogs this July Fourth.
Credit: Stan Honda
Share

BUZZARDS BAY, Mass. — The air is pierced by the whine of incoming artillery, followed every few seconds by explosions. Groggily, I think about getting up and taking cover, but then I realize I am no longer in Kabul, Afghanistan. What is going on outside my door is no Taliban attack, it is the joyous celebration of the United States’ birthday.

The Fourth of July brings fireworks and cookouts, family get-togethers and heavy beach traffic. It also, typically, brings an outpouring of patriotism, as we all reflect a bit on what it means to be American in an increasingly scary world.

This year the Yankee Doodle euphoria may be tinged with more than the usual dose of bile. It’s been a tough and ugly campaign year, with voters mulling their unpalatable choices amid a public debate that at times verges on hysteria.

“Obamacare” is either the country’s salvation or the end of America as we know it. Even the Supreme Court, in its acrimonious dissent from the majority opinion in last Thursday’s ruling, suggested that the ruling on the Affordable Care Act had placed our “liberty in peril.”

It’s tough talk on the eve of a national celebration of that liberty, and citizens may be excused for feeling uneasy.

Citizens United, the Supreme Court decision that opened the way for unlimited campaign spending by Super PACs, has either upheld an important principle of free speech, or dealt a death blow to the American political system.

Scott Walker, the union-busting governor of Wisconsin, is either a national hero or the Antichrist.

The list goes on and on. There is no middle ground these days. Simply put, if you agree with me you are on the side of the angels; if not, you are the worst kind of fiend.

It does not make for productive dialogue.

Over the past several months I have traveled through a great deal of the country, from Maine to Florida, from Massachusetts to Utah. I have found a level of fear and anxiety I do not remember from decades past.

Americans once strode the globe with a confidence bordering on hubris. It is an altogether more chastened public I see these days. The American Dream, the golden illusion of unending progress, seems to have been badly tarnished.

The results are not pretty. It seems that America is retreating into two camps, both armed with righteous indignation and moral superiority. Each side is convinced that they, and they alone, are correct — and embrace their convictions with a near religious fervor.

In a presidential election year, these camps have easy labels: Democrat and Republican.

More Highway '12: Arizona and the Supremes — Who won?

The Republicans are the conservatives, and proud of it. During the primary campaign, each Republican candidate vied for the honor of being considered “the true conservative.”

But what is conservatism? Depends on whom you ask.

“Anger. Hatred. Fear,” was the succinct characterization of the “C” word given by a retired opera singer in Utah. Her husband agreed.

“Conservatives live in a jungle,” he said. “They see danger everywhere. Liberals live in a more nurturing world. They want to take care of everybody, and they want to be taken care of.”

In Arizona, the conservatives seemed to have the upper hand. They, of course, felt very differently from my Utah couple.

“It is very simple,” said one small business owner in Tucson. “We are trying to save America, the liberals are trying to destroy it.”

For these people, Democrats were trying to give away their hard-earned money to slackers and freeloaders; the fundamental principles of individual responsibility and hard work were being undermined by liberals who wanted to bring in the “nanny state.”

“The problem with the Democrats is they think everyone can be a winner,” said one Arizona businessman. “It is not true. There will always be losers.”

In Colorado, I interviewed a genial lawyer, who professed himself to be a social liberal and a fiscal conservative. He supported gay marriage, women in combat, and sexual freedom for all.

But he bristled at a sign in front of a prestigious local hospital boasting “One level of care for all.”

“How can they do that?” he fumed. “I had to take my son there after he had a motorcycle accident. I don’t want just one level of care. I want the best for my son.”

As a wealthy member of the legal profession, he got it, of course. He also knows which side of the political debate he is on.

“We cannot afford another four years of Obama,” he said firmly. “It will be the death of America.”

In Iowa, at the very start of the campaign, I interviewed volunteers at the Iowa caucuses. They were working for a variety of candidates, with varying levels of enthusiasm. Ron Paul had a very vocal group of supporters, most of the others had a less rambunctious following.

Justin, a political science major from the University of Iowa, told me his favorite books were “anything by Hannah Arendt” and the Bible. He was working for the Romney campaign.

“Any one of these candidates can beat Obama,” he said firmly. “They have to. Do I love my candidate? No. But we have to defeat Obama. So I’ll hold my nose and vote for Romney.”

Barack Obama, once the repository of a nation’s overblown hopes and dreams, is now bearing the brunt of Americans’ anger at the dismal way things have turned out.

But through all the rage sweeping the country, there is a bedrock conviction that America is still the greatest nation on Earth.

Mike, an electrician in Michigan, delivered a long litany of complaints to me one evening at a party. The liberals were eroding our liberty by introducing the government into all aspects of our life; the economic picture was bad and getting worse; education was in the toilet and Americans were more divided than ever.

“But it still is the best place in the world,” he said, looking at me earnestly. “Don’t you think so?”

I ran into some foreign exchange students along the way, from various points on the globe. When I asked them what they thought of the US elections, one of them, a young woman from Central Asia, laughed.

“Well, compared to our elections, yours look pretty good,” she said. “I am not sure what everyone is so worried about.”

At least we are still ahead of Kazakhstan on the freedom scale.

Even in ultra-liberal Massachusetts, the patriots are out in force. Anna, a health care professional, saw me swimming at our local beach the other day.

“So you are finally home,” she said. I have been gone to distant parts for most of the last 25 years.

“I don’t know,” she said. “We may have our problems, but I would not want to live anywhere else.”

As the United States celebrates its 236th anniversary (237th if you happen to be from Massachusetts), it may be time to put the bitterness behind us, if only for one day. Perhaps our president is right: There is much that divides us, but even more that unites us.