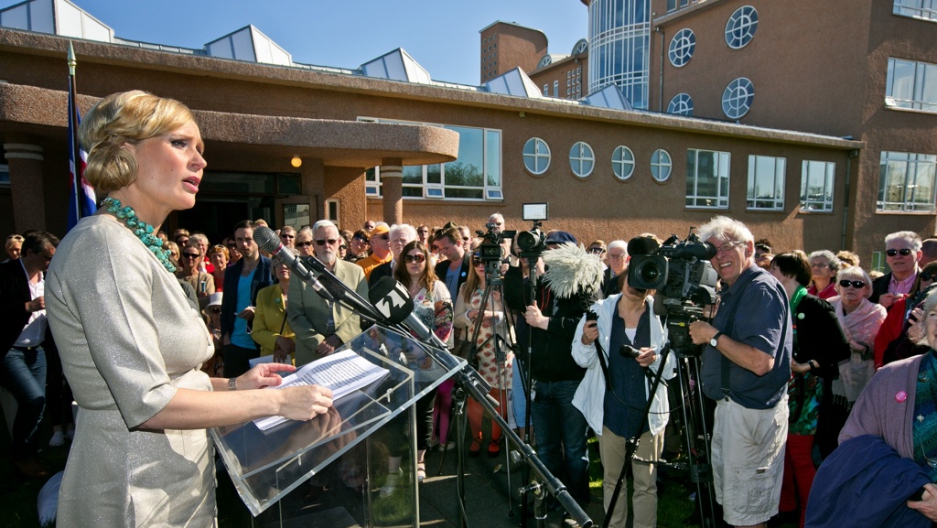 Iceland journalist and presidential candidate Thora Arnorsdottir gives a speech during the opening of her campaign office in Reykjavik.
Credit: Omar Oskarsson
Share

On June 30 however, when voters decide on the fate of incumbent Olafur Ragnar Grimsson — the last remaining cheerleader for the country’s disastrous foray into global banking — Iceland’s volatile geology offers a better metaphor for the tectonic uncertainties of what lies ahead.

Grimsson, 69, has previously held an almost unassailable position in Icelandic politics. A populist with telegenic looks (and a passing resemblance to Hollywood actor Doug McClure) he has stood unopposed in two of the past four presidential elections.

But that was before the country’s overheated banking sector collapsed, triggering a financial vortex that wiped out billions of dollars deposited by foreign customers and came close to pushing the entire country into bankruptcy.

So this time is different. Not only because Saturday’s vote is the first occasion Icelanders will have to hold Grimsson to account for any role in the 2008 banking crisis, but also because he faces his strongest challenger to date: Thora Arnorsdottir.

Arnorsdottir is a 37-year-old mother who only recently gave birth to her third child. A former television presenter, her glamorous appearance and domestic life have attracted as much attention as her political — or, to be more accurate, apolitical — outlook.

In contrast to Grimsson, who has twice vetoed, controversially, legislation aimed at rebuilding diplomatic bridges torn down by the crisis, Arnorsdottir bills herself as a non-partisan figure who can unite Iceland and salvage its international reputation.

A victory for Arnorsdottir would achieve another milestone: It would complete the veritable takeover of Icelandic politics by women.

Already, Iceland's cabinet is dominated by women, including the key posts of prime minister and finance minister. Such a gender shake may not be entirely unconnected to the banking fiasco of 2008, according to some.

The crisis left Iceland with massive external debt, amounting to more than five times the country’s GDP. Most of it was accrued by three banks, run overwhelming by male executives; since then, the country has largely favored women over men in leadership roles, as writer Michael Lewis pointed out in his 2011 bestseller, "Boomerang: Travels in the New Third World."

In style, Arnorsdottir is no Margaret Thatcher. Her campaigning might seem a little on the sedate side compared with Grimsson’s loud determination to politicize what was once seen as a symbolic job. Yet her reflective outlook has won considerable support. Last month one opinion poll listed her as favorite.

“Iceland as a brand can be a valuable asset and I want to help to introduce that to the world,” she said in a recent interview. “I regard the role as an advocate for the country’s interests as an important part of the president's role abroad. But all this needs to be done in a humble and respectful way.”

Analysts say the key factor that could swing her the election is voter tendency to associate Grimsson with the banking disaster, even though he has enjoyed considerable popularity for trying to protect ordinary Icelanders from the financial pain of its aftermath.

Prior to 2008, Grimsson was a vocal overseas champion of Iceland’s privatized financial sector, regularly trumpeting the “Viking investors” who transformed a backwater economy into a wealthy powerhouse. He frequently ridiculed skeptics who said its prosperity was built on thin air.

Then the global downturn struck, turning his claims on their head. Iceland’s three main banks, Kaupthing, Landsbanki and Glitnir, collapsed in the space of a week under the weight of vast debts built up during years of aggressive overseas expansion. Its currency also buckled.

What was clearly an omen of the problems that would later hit Greece, Ireland, Portugal and Spain resulted in a $4.6 billion bailout, from the International Monetary Fund and four Nordic countries.

In the wake of the crisis, Iceland has done its best to consign its troubles to the past. In 2009, it elected Johanna Sigurdardottir as its new prime minister and put her predecessor Geir Haarde and three of his ministers on trial for negligence. Haarde was found guilty on one of four charges.

Iceland has recently been hailed for the speed at which it has managed to turn its economy around. GDP grew 2.4 percent quarter-on-quarter in the first three months of 2012, fueled by a surge in exports, tourism and domestic consumption. Economic growth is now at 4.5 percent.

Having this month made an early repayment of $483.7 million to the IMF (following a $900 million installment paid in March), some point to Iceland as a model for other European economies hoping to dig themselves out — although its relatively tiny economy meant that it could simply default without causing systemic repercussions posed by other debt-ridden countries.

Amid this recovery, Grimsson has been a thorn in the side of Iceland’s parliament.

In the immediate aftermath of the collapse, Iceland faced claims from the British and Dutch governments on behalf of their citizens who had lost deposits paid into the Landsbanki-controlled Icesave bank.

When Iceland’s parliament voted to repay 3.8 billion euros ($4.8 billion), Grimsson broke with presidential tradition to exercise a veto. In 2010 and again in 2011 he called referendums on the repayment. To the dismay of the UK and the Netherlands, both saw voters reject the move.

Christian Rebhan, an Iceland expert with the Research Group on Northern European Politics at Berlin's Humboldt University, says while Grimsson’s earlier role in promoting the financial sector did heavy damage to his credibility, his stalling tactics have helped him save face.

“Grimsson’s talk of financial Vikings exposed him not so much to blame as to ridicule. If you read his speeches from 2005-2008 and compare them to what happened afterwards, they are quite funny,” he told GlobalPost.

“This changed when he used his role politically and referred the Icesave treaties to referendum, because many people saw him as a president who dared speak up against international pressure — so his chances of being re-elected are quite big.

“But people are thinking 16 years with the same president is maybe a little bit long, and given his history, they also think they need a fresh face.”

Grimsson shows no sign of giving up the fight just yet. In the election run-up he has singled out Arnorsdottir as the strongest of his seven challengers and unleashed volcanic fulminations denouncing her as “dangerous for the country.”

Arnorsdottir, who has also had to counter fears that her new motherhood would conflict with the presidency job, has responded by touting her credentials as an apolitical figurehead who can win friends for Iceland rather than create enemies.

“She’s very eloquent, she’s studied in America, she’s worked at the national television agency, she is the mother of three children, and she is very young compared to the incumbent,” said Rebhan.

But, he says, her main selling point is her desire to return presidential politics to the pre-crisis, pre-Grimsson days when its focus was — to return to the analogy of Nordic sweaters — the promotion of a more tightly-knitted Iceland.

“She wants to be that symbol of unity that Grimsson has not been.”