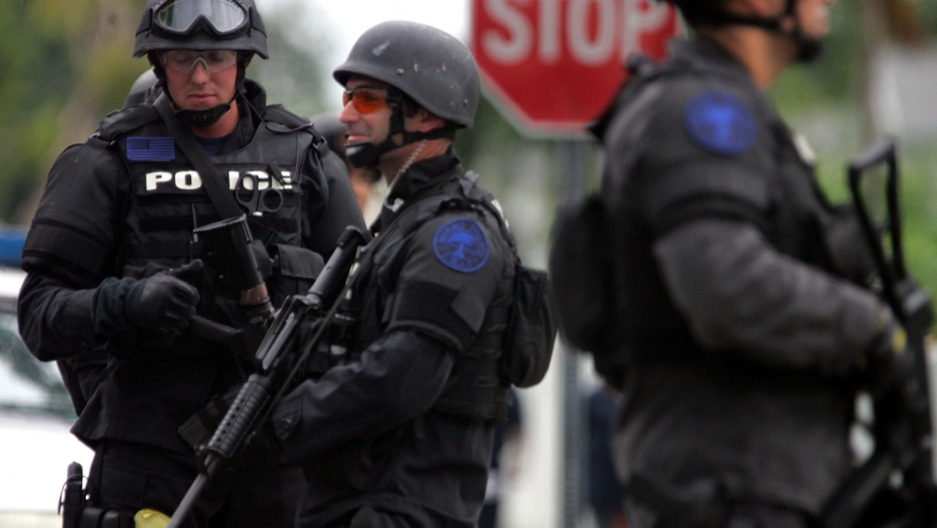 Miami SWAT team members stand in front of a home that was raided Sept. 27, 2006 in Miami, Florida. The raid was part of an ongoing crack-down in a neighborhood affected by violence.
Credit: Joe Raedle
Share

Police in Evansville, Ind., received an embarrassing lesson in technology – and public relations – when they sent a SWAT team to the wrong house after receiving anonymous threats over the Internet.

Someone with the username US ARMY posted threats at Topix.com saying, “I’m proud of my country but I hate police of any kind. I have explosives made in America. Evansville will feel my pain.”

The cops traced the comments to a wireless connection at 616 East Powell Ave., where 18-year-old Stephanie Milan sat watching TV, The Evansville Courier and Press reported.

To make their point, police invited the local TV station along to film their takedown on June 22.

As they approached the house, they sent two flash grenades into the home, breaking a window and the open front door (it was really hot outside).

Unfortunately, as it turns out, they had the wrong address.

The Milans have an open wireless router that was likely pirated by whoever made the comments.

“The front door was open. It’s not like anyone was in there hiding,” Ira Milan, Stephanie’s grandfather, told the Courier and Press. “To bring a whole SWAT team seems a little excessive.”

Police defended their response, saying their investigation led them to believe the person who made the threats might have weapons.

They also said there were fears officers’ addresses might be leaked online.

“They’re making threats and we’re going to address that,” police spokesman Jason Cullum told the local ABC affiliate, WTVW. “We owe that to our families, to our children and to the community.”

Back at headquarters, more digging resulted in a new address a few doors down to investigate a few days later.

This time, police said they knocked at the front door.

“We knew that there were little kids there, so we decided we weren't going to use the SWAT team,” police Chief Billy Bolin told the newspaper.

They’ve identified a suspect at the new address, but have yet to lay any charges.