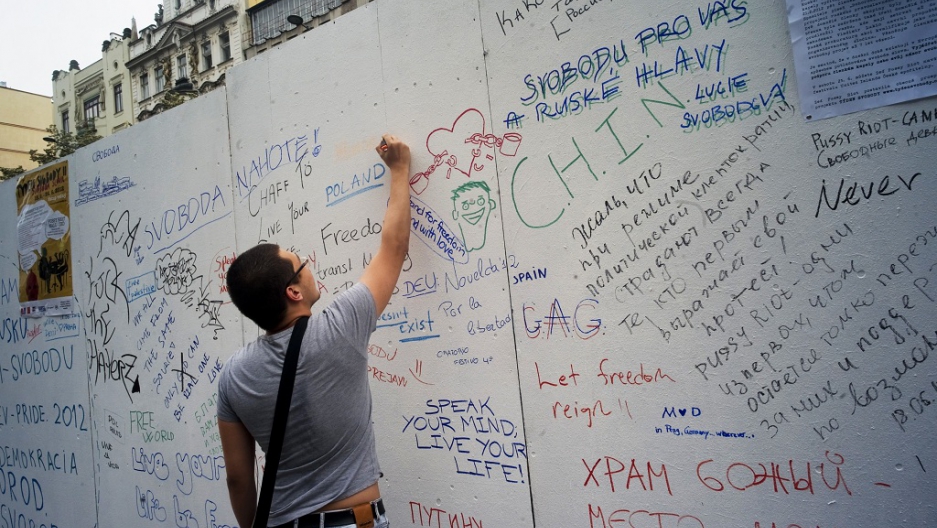 More than 100 of Russia's best-known cultural icons have signed a petition asking authorities to release three members of the all-female 'Pussy Riot' punk band from jail.

Nadezhda Tolokonnikova, Yekaterina Samutsevich and Maria Alekhina have been held in pre-trial detention since March over their performance of an anti-government song in a Moscow church, AFP explains.

Radio Free Europe reports that among the petition's signatories are well-known opponents of President Vladimir Putin, such as author Boris Akunin, poet Dmitry Bykov, and the rock singer Yury Shevchuk.  However, it also includes actors Chulpan Khamatova and Yevgeny Mironov who appeared in videos urging Russians to vote for Putin in the March elections.

A copy of the letter which stated: "We do not believe that the actions of Pussy Riot constitute a criminal offense," was published in the Russian-language Moskovsky Komsomolets newspaper, says the Moscow Times.  It continued: "The girls did not kill anyone, they did not rob, did not commit violence, did not destroy or steal anyone's property . . . We see no legal basis or practical reason for the further isolation of these young women, who do not pose any real danger from society."

Several signatories have filed the petition with the Supreme Court and with the Moscow City Court, according to the Russian Legal Information Agency, RAPSI.

"This is probably the last chance for the authorities to preserve face and to exit this story that has become a symbol for the obscure, senseless and lawless cruelty," the Russian news blog Gazeta wrote in an editorial.