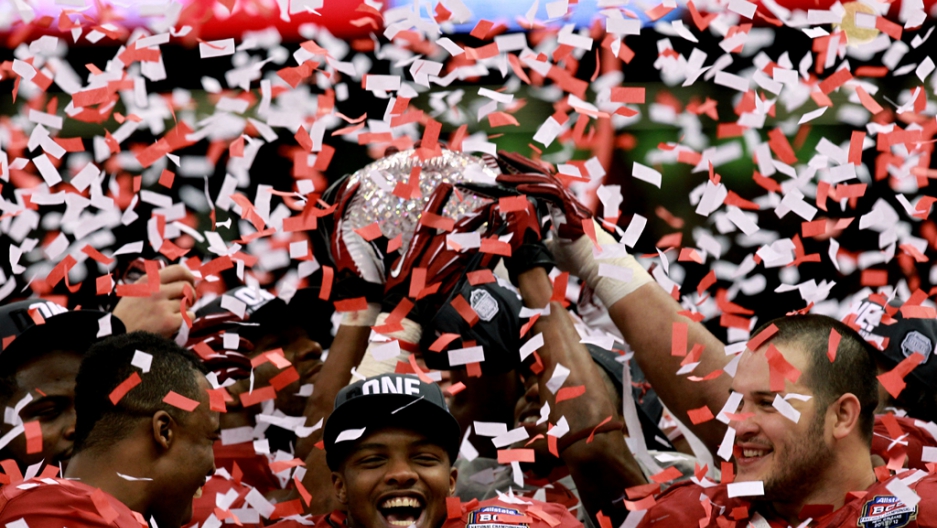 Marquis Maze (No. 4) and the Alabama Crimson Tide celebrate after defeating the LSU Tigers in the 2012 BCS national championship game at the Superdome on Jan. 9 in New Orleans. Alabama won of 21-0.
Credit: Ronald Martinez
Share

When commissioners from the 11 major college football conferences – and Notre Dame’s athletic director – announced Tuesday plans for a playoff, there was much rejoicing.

Finally. “Easiest decision ever,” talking head Jim Rome tweeted. However, the excitement has died down a day later, and more questions than ever have surfaced.

Just who is going to be invited to this exclusive club? Why only four teams, why not eight or 16?

Seems like the debate about how to decide the top college football team in America hasn’t vanished, it’s just changed topics.

When college football announced Tuesday it was scrapping the much-reviled Bowl Championship Series in favor of a four-team playoff, sports fans across the country exhaled a collective, "Finally." Let the "I told you so's" begin.

Good riddance BCS. And stop patting yourselves on the back for doing what should have been done long ago. Easiest decision ever.Jim Rome
College football generates tens of millions -- if not billions -- for American schools, networks and retailers. It's larger than life, and only getting bigger.
It's only 64 days until college football kicks off! @EveryGameCounts #bcs #cfb #cantwait http://pic.twitter.com/iM2apYcbMatt Montgomery
And what do all sports need? Winners and losers. But with college football, that's never been easy to identify because of the bowl system. Once upon a time, coaches and journalists voted on who was No. 1, but that just invited criticism of bias. Not so long ago, computers were added to the mix, calculating value for wins and losses and deriving a ranking ... but computers don't have emotion. Neither system is perfect, and in the world of instant replay and ever-present media, we need perfection.
BCS: News, highlights and insights into the Bowl Championship ...BCS: News, highlights and insights into the Bowl Championship Series.
For decades, so-called Super Conferences generated the most national champions. When an SEC, ACC, Big 12, Pac-12 or Big Ten team won a Sugar, Cotton, Fiesta, Rose or Orange Bowl, they were often declared champions. It has become messy, of late, with the emergence of smaller schools from lesser conferences finishing ahead of the big boys. OK, it's all Boise State's fault.
Selection committee will look at W-L first and foremost. If Boise State or any other team goes undefeated, 99.9% chance they're in playoff.Bryan Fischer
Just take the top 8 or 16 and have a playoff, the pundits cried (even President Obama chimed in) but the money-men behind bowl games aren't willing to give up their cash cows so easily.
President Obama's administration looking into legality of BCS - ESPNJan 30, 2010 ... The Justice Department says the Obama administration is considering a number of steps that would look into the legalit...
Turns out, they've been negotiating for months trying to incorporate their bowls into a playoff. Commissioners of the 11 major football conferences finally announced Tuesday a four-team post-season to begin in 2014.
BCS presidents approve four-team major college playoff http://usat.ly/MzraoRUSA TODAY
College Football Gets Playoff, BCS Is Deadassociatedpress
Most of the initial reaction is positive, but mostly because the BCS seemed so inadequate.
Kudos to college football implementing four team playoff. Now a true champion will be crowned. http://pic.twitter.com/NFRa9S9ksurf fan 65
Stewart Mandel: After 65 years of waiting and debating, playoff finally here http://tinyurl.com/8a3mzyxManuel Gonzalez ♍.
College Football Playoffs?: Yep --- at long last. http://bit.ly/MUKnDMDaily Stag Hunt
Mostly positive.
Dear College Football, your attempt to move from the BCS to a playoff system still sucks. But A for effort. #collegefootball #bcs #playoffsBrittany Bearce
Of course, there are questions. Oh, are there questions. Instead of attacking "committees" for choosing one team over another as national champion, there's likely to be plenty of heat surrounding the four teams chosen for semifinals.
College football playoff questions and answers - CBS NewsA committee of university presidents approved a plan for a four-team college football playoff, starting in 2014. Here's what you need to ...
4 team playoff for college football national championship. that takes care of the sec but what will everyone else do?http://bit.ly/NKxMnfMSP
In college football's new 4-team playoff, 3.2% of teams will play for the championship. Compare that to 20.1% of bball teams in the tourneyESPN The Magazine
somehow, some way i feel this BCS playoff is extremely broken already, and it hasn't even started. it has to beAlex
RT @fiestabowlpicks: #ncaaf Postseason focus now turns to selection committee: Modeled after basketball's selection co... http://usat.ly/M4yTzs #usatoday #cfbDavid Cline
Oh, well, it's a step in the right direction. Right?
As far as this college football 4-team "playoff," I find it a lot like putting on cologne when you really need a shower.Michael Smith