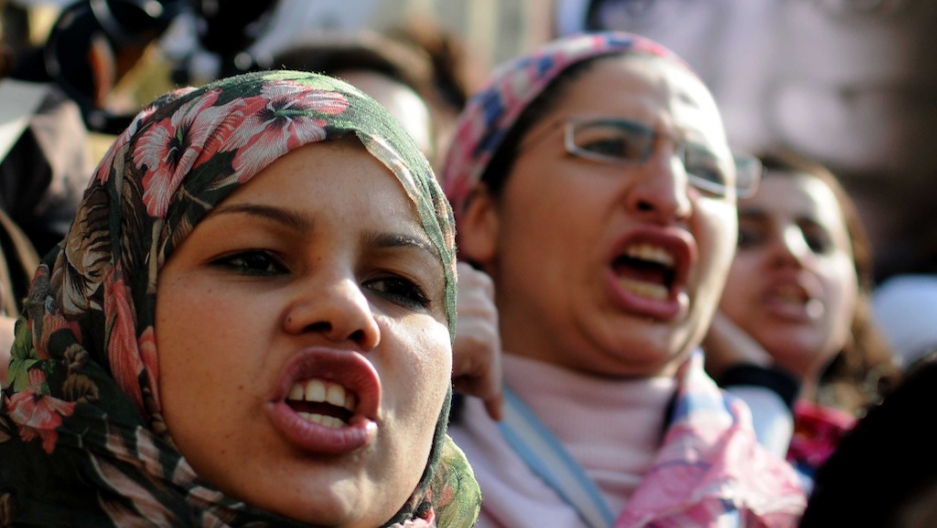 Egyptian women shout political slogans during a demonstration in Cairo on March 16, 2012, in solidarity with Samira Ibrahim, an Egyptian woman who brought a case against an army doctor, Ahmed Adel, accused of conducting forced 'virginity tests' on female protestors. Adel was cleared of conducting the test on Samira Ibrahim after the judge found the witness statements to be 'contradictory', the official MENA news agency said.
Credit: Mohammed Hassam
Share

Egyptian President Mohammed Morsi will appoint a woman and a Christian respectively to be his two vice presidents, CNN reported today. The Muslim Brotherhood leader initially inspired fears of a strictly Islamist state but after just two days in office, Morsi has alleviated that fear — at least a little bit.

"For the first time in Egyptian history — not just modern but in all Egyptian history — a woman will take that position," policy advisor Ahmed Deif told CNN's Christiane Amanpour. "And it's not just a vice president who will represent a certain agenda and sect, but a vice president who is powerful and empowered, and will be taking care of critical advising within the presidential Cabinet."

Before his election, Morsi spoke to Amanpour as well about women's rights and said, "Women's rights are equal to men. Women have complete rights, just like men. There shouldn't be any kind of distinction between Egyptians except that is based on the constitution and the law."

Unfortunately, while the notion of a woman in a position as high-ranking and powerful as VP is promising, women in Egypt still face rampant discrimination and harassment, which has continued into this week.

British journalist Natasha Smith posted a graphic post on her blog today about her violent sexual assault at the hands of a mob of Egyptian men in Tahrir Square over the weekend. Other female journalists, such as Mona Eltahaway and Lara Logan have been attacked as well, and for Egyptian women, this kind of treatment is distressingly common.

Numerous attacks against Egyptian women have been reported in and around Tahrir Square for the past year, and although the revolution has resulted in Egypt's first truly democratic presidential election, women's rights face an uphill battle. Women have also faced abuse in detention facilities, and the "virginity tests" are still fresh in the minds of women and girls risking arrest.

On Friday, a protest against sexual harassment and assault will take place in Tahrir, said organizers on Facebook. Protesters hope this action will go better than the last anti-harassment protest on June 8, during which women were attacked and chased through the streets of Cairo.

A 2008 study by the Egyptian Center for Women’s Rights (ECWR) found that "well over two-thirds of Egyptian women are sexually harassed daily in the country," according to Bikyamasr.com.

Morsi seems to want to tackle the probem, and become the reformer the people have hoped for, but his insistence on equality won't dissuade those women who have already given up and removed themselves from Tahrir Square.

"I fear to go to Tahrir square alone now despite I used to go alone all the time there. I feel that I am defeated but one thing must be clear for sure I have not lost my faith in the revolution or in this country. I am not afraid despite my personal concern on my safety," wrote blogger Zeinobia on The Egypt Chronicles.

For more on the situation in Egypt, check out our Special Report, "Egypt Votes."