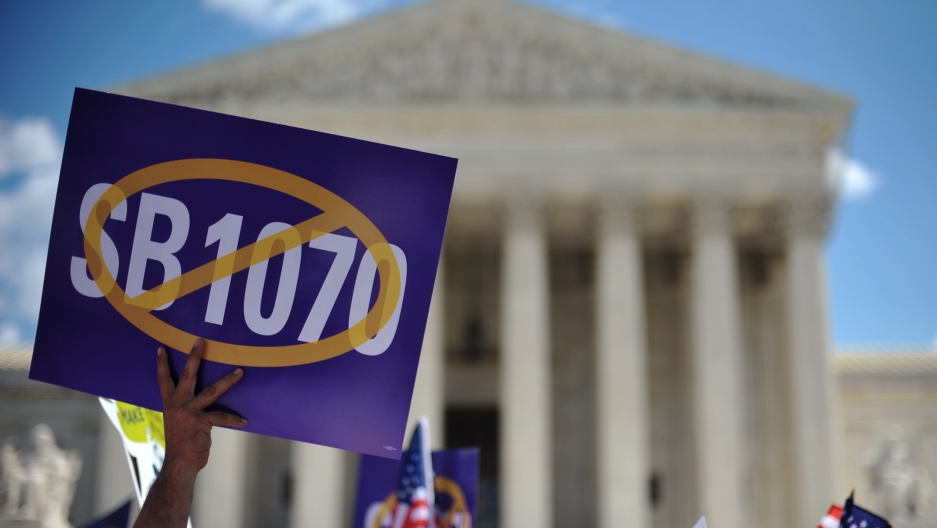 A protester holds a placard during a protest against Arizona Senate Bill 1070 on April 25 outside of the US Supreme Court in Washington, DC. The Supreme Court began reviewing Arizona's controversial law, which empowers Arizona police officers to stop and demand immigration documents of anyone suspected of being an illegal immigrant.
Credit: MANDEL NGAN
Share

The US Supreme Court voted Monday to uphold one of the most controversial parts of Arizona's immigration law: the requirement that police check the status of someone suspected of being in the US illegally.

However, Arizona isn't the only place that has clamped down unfavorably on its immigrant population. Here, we take a look at five of the world's worst places to be a foreigner.

According to the Migration Integration Policy Index (MIP), Latvia's immigration policies are the worst of 31 countries surveyed worldwide.

Why? Well, the Eastern European country barely follows the EU's standards for immigration, and "takes only the ‘minimum’ approach to fight discrimination" in terms of who it lets migrate, MIP reported. Latvia also does not give immigrants immediate rights to work. Because its immigration procedures are so loosely interpreted by officials, many immigrants remain "insecure" in their status, according to MIP.

Tokyo's government officials will pay immigrants to get out of their country -- literally.

Passed in the spring of 2009, the "Nikkei" Law (Nikkei refers to a Latin American immigrant of Japanese descent) offers unemployed Latin American immigrants $3,000 to leave Japan and return to their home country, Foreign Policy reported. Their family members also get $2,000 for the relocation. There's just one catch: you only get the payment if you promise that you will never return to Japan to work. Not exactly the fairest trade we've ever heard.

In March 2010, the Southeast Asian country passed a series of measures that required its roughly 1.5 million immigrants to register their identities with Thai authorities, the Wall Street Journal reported. All immigrants must prove their nationalities and have them verified by their home countries, or else face deportation from Thailand.

A report by Human Rights Watch also found a pattern of arbitrary arrests, rapes, and forced bribing of immigrants.

The flood of illegal immigrant workers from Southeast Asia and India have helped buoy the UAE to become one of the Middle East's most successful economies, but its immigration laws have yet to catch up, according to Foreign Policy.

One of the country's most controversial laws prohibits foreigners from participating in labor unions. This means that living conditions for migrants often include 80-hour work weeks, intense manual labor, and below-minimum-wage salaries, FP reported. The typical situation for illegal immigrants in UAE? "Tiny pre-fabricated huts, 12 men to a room, forced to wash themselves in filthy brown water and cook in kitchens next to overflowing toilets," The Guardian reported.

Australia may not come off as a harsh place for immigrants, but the country is still working off of its 1958 Migration Act, which mandates that non-citizens found to be in Australia without proper visas be detained. Furthermore, "unless they are granted permission to remain in Australia, they must be removed as soon as reasonably practicable," according to the country's Department of Immigration and Citizenship.

A report by Australia's Human Rights commission found that the country's child refugees were abused and mistreated while in detention.