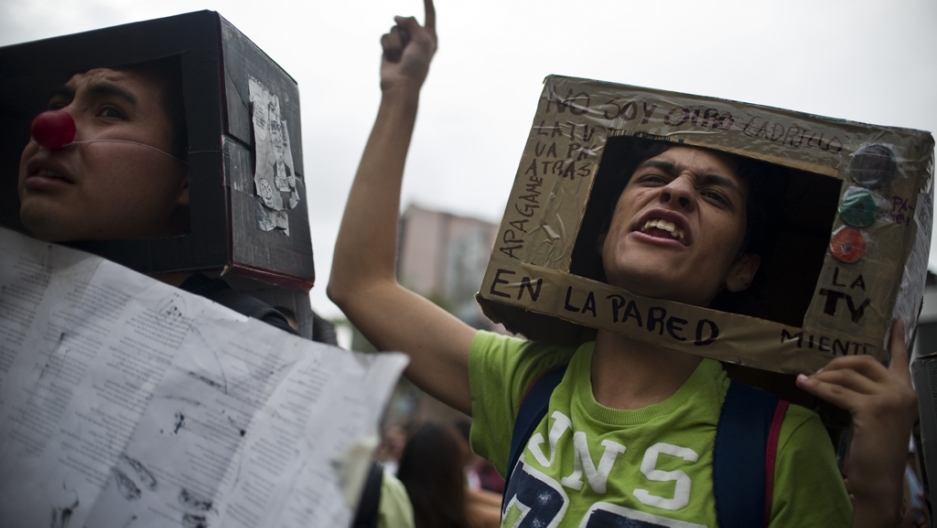 Members of the "Yo soy 132" (I Am #132) movement participate in a protest against Televisa TV station, to demand fair broadcasting and electoral information, in Mexico city, on June 13, 2012.
Credit: Ronaldo Schemidt
Share

A poster attached to the base of the statue took aim at two focal points of their rage — presidential candidate Enrique Peña Nieto and Mexican TV network Televisa. The poster read: “Peña Nieto, this is the reality of Mexico — not Televisa. The people have woken up.”

In the last stretch before Mexico’s July 1 presidential election, young demonstrators have come out in droves. They call themselves “Yo Soy 132” and “Mas de 131” — I am 132, and More than 131 — referring to a crowd of 131 college students who heckled the presidential hopeful, and later posted videos on YouTube to prove it.

Some are calling their peaceful protests the “Mexican spring.” But these angry youth are not fighting to upend an oppressive political regime. They’re working to stage a democratic revolt against an almighty establishment of another order: television.

The country’s two main TV networks, Televisa and TV Azteca, are under attack for apparently favoring Peña Nieto, former governor of the state of Mexico, and his soap opera starlet wife, to move into Los Pinos presidential residence.

That outcome looks very likely. Throughout most of the campaign season beginning in March, the ex-governor has relished a double-digit lead in some polls. However, in late May, not long after the protests began the movement garnered a small victory — his margin started to shrink.

On Tuesday, the budding movement hit an extraordinary milestone. The TV networks had drawn fire from critics for ignoring past presidential debates. So the 132s sidelined TV. They invited candidates to go live on the internet, solicited questions via Google Moderator and streamed the event on YouTube, in what became Mexico’s first-ever presidential debate organized by anyone other than the government’s federal elections commission.

“Today we made history … we broadcast a debate for the first time in history in this country organized by the citizens,” Andres Torres Checa, a student at Mexico City’s private college, the Autonomous Technological Institute of Mexico (ITAM), told reporters.

All the main candidates attended — except Peña Nieto, who had respectfully declined, saying he could not take part in a debate in conditions that fail to “guarantee a space of neutrality.”

At the start of the debate Genaro Lozano, a university professor who acted as the event's moderator, explained that "for the two hours of this debate, you'll see an empty seat that would have been occupied by the candidate from the Commitment to Mexico Coalition," Peña Nieto.

Duncan Wood, a professor at ITAM, told GlobalPost that Peña Nieto's decision to avoid the event "damages his image in terms of his commitment to democratic discourse.”

“The empty seat was emblematic," he added.

Turn off the TV

Some 95 percent of homes have a television in Mexico, Latin America’s second-largest economy. While Mexicans have a host of cable channels to choose from, cable only reaches 30 percent of all households, according to a Wall Street Journal op-ed by Emilio Azcarraga Jean, the billionaire owner of Televisa.

His company and rival TV Azteca, which belongs to Mexican billionaire Ricardo Salinas Pliego, control most national broadcasting in what many consider a duopoly. Both companies are publicly traded.

Suspicions about television being in politicians’ pockets have long been widespread in Mexico, which is notorious for its bouts with corruption.

US diplomatic cables given to WikiLeaks, dating back to 2009, allege that then-Governor Peña Nieto was paying for favorable TV coverage, The Guardian reported.

For many, those suspicions have been confirmed. The presidential hopeful faces a firestorm of criticism for allegedly spending US$90 million from state coffers to promote his achievements in office, including TV ads touting public works projects. Televisa, prime benefactor in Mexico’s $2.5 billion broadcast advertising market, provided an ample platform.

But media also allege that his staff paid $3 million in handouts to individual journalists who gave glossier coverage to the candidate.

Mexican news magazine Proceso and UK’s The Guardian published documents they say indicate a promotional deal between Televisa and Peña Nieto. That sparked a fiery response from the television group. The company accused The Guardian of a “lack of journalistic rigor.”

Peña Nieto has said the allegations are “totally false information.”

But the ties go deeper than money, critics say. Many wonder what kind of policy stances the candidate would take once elected that could help bolster broadcast companies’ success.

More from GlobalPost: Mexican elections — a darker shade of green

The candidate’s opponents are also wary of the coziness between the Azcarraga family, who have run Televisa for three generations, and Peña Nieto’s Institutional Revolutionary Party, or PRI. Emilio Azcarraga, father of the current CEO, once described himself a “soldier for the PRI.”

Critics blame Televisa for spinning Peña Nieto into a tabloid favorite, providing detailed coverage of his courtship, marriage and even wedding kiss to its popular soap opera actress, Angelica Rivera.

She said Televisa producers “want to give the story a happy ending, a telenovela ending.”

As for the internet, meanwhile, Mexico’s national statistics institute says less than a third of all homes have a web connection. But internet use is rising. More than half of the Mexican population could become web users by 2015, estimates eMarketer, a digital market research group.

The protesters, many of them college age, are ahead of the curve. They seem to live in a post-television world. “Turn off the TV, turn on your brain,” reads one rally poster. The subtext, though, is clear: but stay connected online.

“I look for news on the internet,” Rodulfo Correa, 33, a graduate of one of Mexico City’s private universities, said at a recent 132 rally.

The movement continues to circumvent the country’s powerful TV with user-generated web savvy. Their videos go viral on YouTube and their very name was an instant “hashtag” hit on Twitter.

The 132 movement's successful presidential debate broadcast, said Duncan Wood, the ITAM professor, has “broken the stranglehold of the top media.”

TV may be catching on. Televisa provided access on its website to view the online-only debate — organized by its staunch young rivals.

Zavaleta, who went to college in Argentina, has attended a number of 132 events since she found out about the protest on Facebook. She said, “It’s the Mexican Spring.”