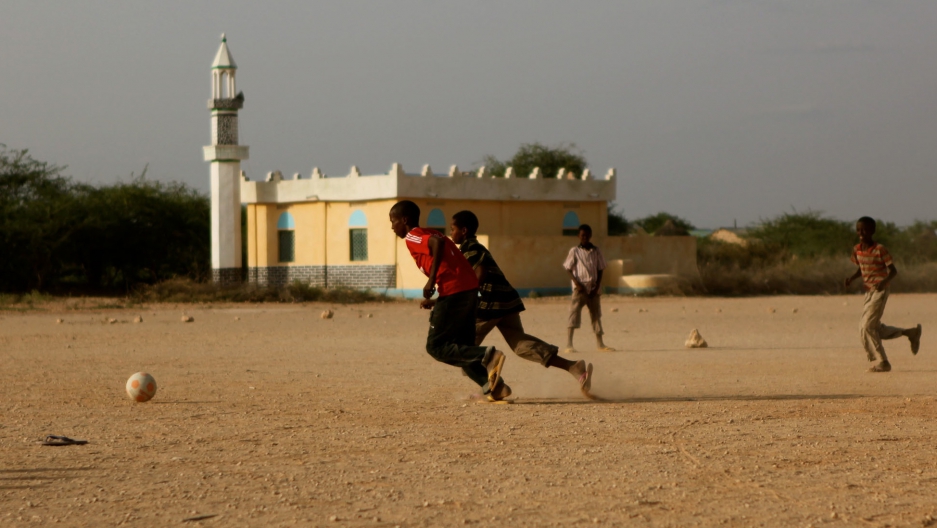 Like musical ringtones and long trousers, clean-shaven faces and international radio stations, soccer was banned under the puritanical rule of Al Shabaab. For nearly four years arbitrary laws and brutal punishments were the order of the day.

The few foreign aid agencies in the area were expelled, crippling medical care and reducing food supplies. Imams were kicked out of their mosques and schools closed. So when more than 2,000 Ethiopian and Somali government troops swept into Hudur in mid-April there were cheers as Al Shabaab pulled back into the surrounding countryside.

As soon as the militants left, 19-year-old Hussein Abdi went to the market to buy a pair of jeans, dusted off his soccer ball and started hanging out with his friends again at the tea shops that line the uneven streets of Hudur, the regional capital of Bakool province with about 40,000 people.

“Life was hard then but now it’s good. We dress how we want, play football, walk with our friends,” said Abdi. He was back at school again, too, and hoped, eventually, to make it to university.

Abdulkadir Nur, the regional education officer, is responsible for reopening schools and getting pupils back on the standard curriculum after years of learning nothing but Arabic and Quranic studies.

“We had made something here and Al Shabaab broke it,” he said. “Now we need to build their minds again.”

After Al Shabaab left, the governor of Bakool region, Mohamed Abdi, a large man in a sparkly baseball cap known to all by his nickname "Tall," returned to Hudur from exile in a town straddling the Ethiopia-Somalia border. Like other government officials in Hudur, Abdi blurs the lines between civilian and military, running the administration and ordering troops.

“When we came back the people were very happy, they came out of their homes to celebrate and welcome us,” he said.

Mahmud Abdi, an intelligence officer, said when he first walked through Hudur, “You could see what Shabaab had done in the faces of the people: They were scared if you said ‘hi.'”

Al Shabaab’s puritanical version of Islam ran contrary to the predominately Sufi beliefs of people in Somalia, and it was the local imams who bore the brunt of the rebels' theological zeal.

“When Al Shabaab captured the town some innocent people were beheaded, others were arrested or fled town. Some imams were also killed but not here, in other towns,” said Sheikh Ali Ibrahim, imam of Buulow mosque in Hudur.”

Mohamed, clutching a string of prayer beads and a slim collection of Quranic verses, was expelled from his mosque and only returned after Al Shabaab left. “The religion they adopted is something they made up, it has nothing to do with the Prophet Mohamed,” he said.

Officials in Hudur were confident that although Al Shabaab were only 12 miles outside town they would not return. “The time of the hardliners is almost finished, Shabaab is dying,” said Mohamed Ahmed, district commissioner of Hudur.

But the near encirclement of the town by Al Shabaab is causing other problems.

Bakool was one of the first parts of Somalia to be declared a famine zone by the United Nations in July last year. Seventy-six-year-old Amino Mohamud survived thanks to a small store of sorghum she had saved up; others said they foraged for wild fruits, roots and grass.

Last year was tough but Mohamud said although Al Shabaab was no longer in Hudur their presence could be felt in empty market stalls and empty stomachs. “Forget about [last year],” she said, “now is worse. We are besieged by Al Shabaab, movement is restricted, prices are rising.”

Liberated towns like Hudur are islands of government control in a sea of Al Shabaab, which continues to control most of the hinterland and the few roads that cross it. Militant roadblocks ensure the movement of both goods and people is restricted.

“We have encountered problems in terms of getting supplies in from other districts because [Al Shabaab] are blocking all the roads coming into the town,” said the governor, Abdi.

“The businessmen are trying to bring their supplies into town by using donkey carts so they don't use the roads. The pastoralists are coming into town to sell off their livestock, but it is also difficult for them to come here through the official roads, as they are blocked,” he said.

Abdi added that residents who want to return to Hudur from refugee camps along the Ethiopian border are also being blocked.

One resident who did manage to return home was Abdirizak Nur, a 20-year-old who for the previous 19 months had been an Al Shabaab fighter battling African Union and Somali government forces in Mogadishu and other cities.

Nur said he joined Al Shabaab willingly “for jihad, to defend our religion.” After training under an Arab commander in the south of the country he was sent to the frontlines. “There was fighting all the time,” he said.

Eventually he was redeployed to his home region of Bakool and later deserted. “Too many innocent people were being killed, it wasn’t compatible with my beliefs,” he said.

Unlike Abdi who now plays soccer every afternoon with his friends and is looking forward to life getting back to normal, for Nur it seems too late. He still wore his Shabaab camouflage uniform and was undergoing military training having signed up to join the government forces to fight against his old comrades.