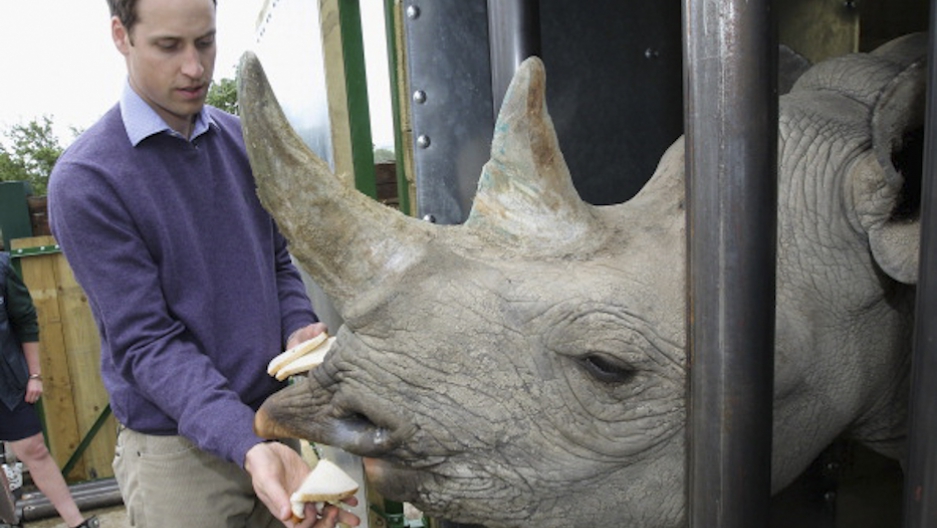 Prince William, Duke of Cambridge feeds a 5 year old black rhino called Zawadi as he visits Port Lympne Wild Animal Park on June 6, 2012 in Port Lympne, England. Prince William, Duke of Cambridge was visiting the park to meet staff and rhinos involved in a translocation project. The Aspinall Foundation along with the Tusk Trust and the George Adamson Trust are combining forces to stage a rare translocation of three captive born black rhino to Mkomazi National Park in Tanzania in order to rejuvenate numbers of the black rhino in the area. The three animals are being airlifted in a dedicated DHL Boeing 757 from Manston Airport in Kent direct to Kilimanjaro Int Airport in Tanzania. The three black rhino have been donated by Damian Aspinall, Chairman of The Aspinall Foundation, from their breeding group at Port Lympne Wild Animal Park in Kent. The reintroduction of endangered species to the wild to assist breeding programmes is a major focus of The Aspinall Foundation. Prince William, Duke of Cambridge as Patron of Tusk Trust and a dedicated campaigner against poaching visited the rhinos at Port Lympne ahead of their translocation and today released a speech via the BBC highlighting his dedication to the fight against the illegal trade of ivory.
Credit: Chris Jackson
Share

JOHANNESBURG, South Africa — The Duke of Cambridge, better known as Prince William, has spoken out about the rhino poaching epidemic in Africa.

Prince William told the BBC he developed a love for rhinos after helping to hand rear them at a friend's game reserve in Kenya.

But one of those he fed, a rhino named Max, was killed this year by poachers.

"Sadly, he ran into the wrong people and he is now on someone's mantelpiece somewhere probably," he said in an interview with the British broadcaster.

The brutal killing of rhinos is fueled by the soaring demand for their horns in China and particularly Vietnam, where rhino horn is now more expensive than gold.

Vietnam's newly rich buy rhinoceros horn, most of it from rhinos killed by poachers in South Africa, as a cure for cancer, fever — or even just a hangover.

Prince William said the illegal trade in rhino horns was "ignorant, selfish and utterly wrong," and warned that rhinos are being slaughtered at such a rate they could soon be extinct.

"Along with elephants, they're two of the most heavily poached animals currently in the world," Prince William told the BBC.

"If we don't do something about them, it's going to be a tragic loss for everyone."

Prince William is the royal patron of wildlife charity the Tusk Trust, and has backed a program run by the Aspinall Foundation, another conservation group, to return three rare black rhinos born in captivity in the UK to the wilds of Tanzania.

The rhinos have arrived at their new home in Mkomazi National Park in northern Tanzania, where they are under the constant protection of armed guards.

South Africa, which is home to 21,000 black and white rhinos, or about 80 percent of the world's rhino population, has seen a dramatic rise in poaching in the last five years.

So far this year, 245 rhinos have been killed by poachers in South Africa, according to figures released last week. The famous Kruger National Park remains the hardest hit by poachers, having lost 147 of the 245 rhinos.