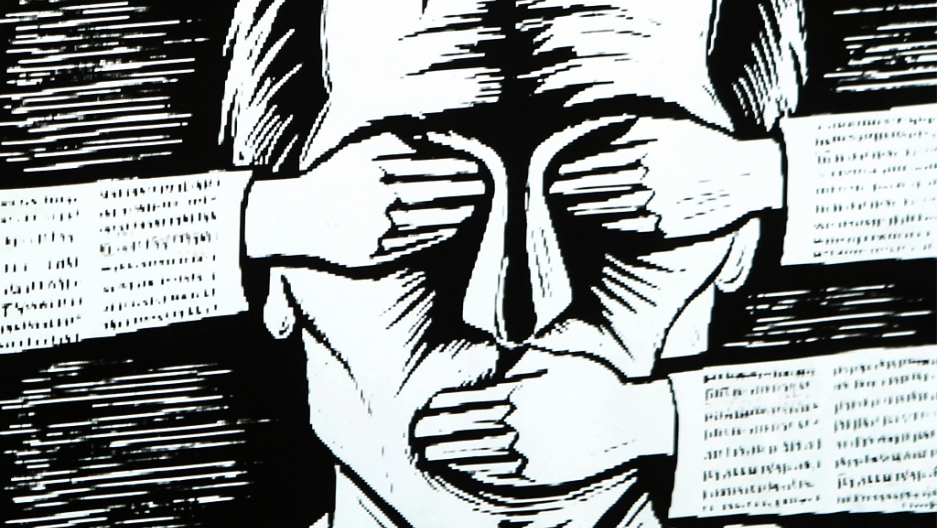 A protest poster against the Indian government's increasingly restrictive regulation of the internet outside a shopping mall in Bangalore on June 9, 2012.
Credit: Stringer
Share

NEW DELHI, India — “Internet Hindus are like swarms of bees,” Indian television anchor Sagarika Ghose tweeted in 2010. “They come swarming after you."

The "Internet Hindus" Ghose refers to — actually, she coined the term — are right-wing bloggers and tweeters who seem to follow her every move, pouncing on any mention of hot-button issues like Muslims or Pakistan.

Liberal journalists and netizens sympathized with Ghose's exasperation. But for right-wingers, it was like throwing gasoline on the fire. Since Ghose's tweet, Hindu nationalists and other conservatives opposed to the Congress Party of Sonia Gandhi and Prime Minister Manmohan Singh have, if anything, multiplied and grown more organized — embracing Ghose's derogatory term and making it their own.

Today there are perhaps as many as 20,000 so-called “Internet Hindus,” many tweeting as often as 300 times a day, according to a rough estimate by one of the community's most active members.

“You will find thousands with similar sounding IDs [to mine],” a Twitter user who goes by the handle @internet_hindus said in an anonymous chat interview. “Some [others] prefer to openly do it with their own personal IDs."

Internet Hindus, largely because of their numbers and influence, find themselves smack in the middle of India's censorship debate. There are signs the country's growing problem with controversial online content has already eroded legislators' commitment to free speech.

In April 2011, India added new rules to the 2000 Information Technology Act that required websites to remove content authorities deemed objectionable within 36 hours of being told do so. The amendment specifically targeted allegedly defamatory content and hate speech, but it was less than crystal clear how either could be identified reliably without an arduous trip through India's notoriously slow court system.

Some say the new rules simply bend to Congress Party officials' sway. In December, for example, Kapil Sibal, acting telecommunications minister, was reported to have met privately with top executives from Google, Microsoft, Yahoo and Facebook to ask them to pre-screen and censor such content before it appears online. According to the Times of India, 255 out of the 358 requests that Google received to remove content cited criticism of the government as the reason it should be censored.

Offline, Hindu nationalist groups have used threats and violence to prevent people like artist M.F. Hussain and filmmaker Deepa Mehta from speaking or exhibiting works they deemed insulting to Hinduism. But in the online world, many Internet Hindus believe that Sibal has attempted to blur the line between statements that are slanderous or dangerously inflammatory and those that are only politically incorrect.

Journalists, too, are starting to question the value of certain online content.

In a recent article for the Hindustan Times, journalist Namita Bhandare argued that “when Twitter dwindles to a platform for abuse it loses its sheen,” citing tweets that questioned the moral character of an alleged victim of sexual assault, or the patriotism of a tweeter who criticized anti-corruption activist Anna Hazare and happens to be a Muslim.

More from GlobalPost: India's economy, how bad is it?

Television anchor Barkha Dutt has expressed the similar sentiment that “lurking online — usually behind anonymity or names that suggest an evangelical religiosity — are many propagators of hate and violence.”

Though neither of these journalists has openly advocated censorship, their comments are evidence that trolls, or cyber bullies, and others who abuse the freedoms of the web stand to force a cultural shift.

“The government is scared of us,” said Suvendu Huddar, a 33-year-old Mumbai entrepreneur who calls himself "Internet Hindu" online. “That's the reason they want to knock down the internet freedoms through some biased tools, which seem to be coming up very soon.”

The Internet Hindus don't have a monopoly on trolling, of course — some, like aspiring right-wing Bharatiya Janata Party politician Jits Gajaria, say they've had their own run-ins with abusive stalkers. But because they are so numerous, so committed, and can appear so organized — whether or not they are part of a formal network — it's the Hindu nationalist tweeters who have drawn the most flak.

“[Congress party] supporters tend to shout 'Troll' early and leave,” said Samit, a 37-year-old marketing consultant based in Mumbai. “The reason, in my opinion, is simple. Nationalists tend to have stronger views and are more assured about their 'identity.' This is generally miscontrued as 'stubborn' and ego-driven by the guilt driven/anxious liberals.”

Still, the trolls are out there.

Harini Calamur, for instance, a media professional and self-described “old-fashioned liberal,” frequently attracts online abusers — whether it's for her advocacy of due legal process for alleged terrorists or her support of free speech for controversial figures like Salman Rushdie. In one episode, a particularly odious tweeter from the Hindu right kept her Twitter feed busy with a relentless rant for more than 12 hours.

Similarly, Priyanka Chaturvedi, who holds an elected position with the youth wing of the Congress in Mumbai, has been targeted for attack for her statements on the anti-corruption movement's Hazare and Gujarat's chief minister Narendra Modi — who is vying to become BJP's prime minister candidate, though liberals still hold him responsible for what they call a deadly pogrom against Muslims in Ahmedabad in 2002. Modi is the principal hero of most Internet Hindus, along with Janata Party President Subramanian Swamy.

“I heard things like I'm a paid Congress agent,” Chaturvedi said. “[They said] I'm a Sonia Gandhi agent. I was called a bitch. I was called a whore. Any time I tweet about Narendra Modi, they say I'm paid to tweet.”

Committed Internet Hindus argue that it's easy to block abusive users on Twitter, so there's no need to complain. And all of the people who agreed to talk with GlobalPost — whether openly or anonymously — said that the community discourages tweets that are simply abusive, if for no other reason than that they do nothing for the cause.

“I have always maintained that disagreements have full space in democracy but abuse does not,” said Gajaria. “I have called up abusive tweeple [Twitter users] more than a few times for crossing the line. I feel abuse weakens your argument and chance to win a debate.”

Who are the Hindus?

Many Internet Hindus say they don't have any political affiliation — apart from a deep-rooted disdain for the Congress Party. But broadly speaking, most of them seem to sympathize with an ethnic nationalist doctrine called “Hindutva,” or “Hinduness,” which is the unifying ideology of the Rashtriya Swayamsevak Sangh, or “National Organization of Volunteers” (RSS), a paramilitary organization with as many as 5 million members, and the BJP, its political wing.

Hindutva developed in opposition to the idea of secularism promoted by India's first prime minister, Jawaharlal Nehru of the Congress Party. It proposes that India is first and foremost a Hindu nation, and rather than “appeasing” Muslims and other minorities with special privileges, the government should promote Hindu culture.

“I want the Hindu dignity of India to be restored,” said another 23-year-old Internet Hindu who has yet to join any political organization, in a representative comment. “We've had a glorious past but the Muslim invaders, the Mughals and the Brits destroyed our sense of pride. After independence, the [Congress] continued with that policy. It continued with laws and acts drafted by the British and never bothered to frame new laws which incorporated the spirit of Bharat [India]. It continued with blatant Muslims appeasement while Hindus were reduced to second-grade citizens in their own land.”

At various points in history, Hindutva and the RSS — sort of like Boy Scouts of America crossed with the Ku Klux Klan — have proven problematic. One of RSS's chief ideologues, Madhav Sadashiv Golwalkar, expressed open admiration for Adolf Hitler's ideas of racial (or in this case, ethnic) purity in “We or Our Nation Defined,” one of the founding texts of Hindutva, in 1938.

More from GlobalPost: "Lust and love" murders on the rise in India

“Kar sevaks” or “volunteers” inspired by the ideology tore down the 16th Century Babri Mosque in 1992, sparking nationwide Hindu-Muslim riots. Members of the Bajrang Dal — an organization affiliated with the RSS and known for beating up couples on Valentine's Day — burned to death an Australian Christian missionary and his two sons in 1999. And breakaway Hindutva extremists have been accused of perpetrating terrorist attacks on Indian mosques and Muslim shrines in 2007 and 2008.

That said, however, few, if any, of today's Internet Hindus profess support for such extreme manifestations of the dogma.

“[Muslims] are equal citizens of this country. This country belongs as much to them as much to me and everyone else. As long as they don't indulge in terrorism and/or forced conversions, I have nothing against them,” said Suresh Nakhua, a BJP member who attends RSS functions.

According to an informal online survey, the Internet Hindus are mostly young, educated professionals — as one might expect in a medium that requires a computer and a strong command of English. More than half of them are under 30 years old, 80 percent have undergraduate or graduate degrees, and two-thirds of them earn more than $10,000 a year — putting them on the high end of India's middle class.

Moreover, in branding them as fanatics and trolls, more liberal or “secular” Indians risk missing just how mainstream their anger has become.

“Why is it if there's such vocal Hindutva anger among the middle class, English-speaking classes, why don't we get to know it?” said Shivam Vij, a blogger with a left-wing political commentary site called Kafila.org. “In our English mainstream media, the right wing has very little voice.”