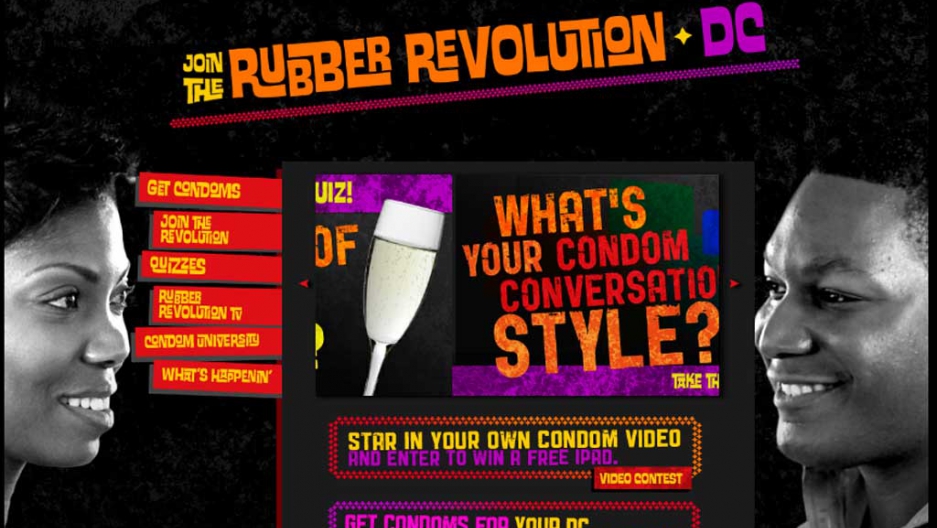 It boasts fluorescent links that direct you to “condom quizzes” and “condom university.” The homepage says you can win a free iPad if you star in your own condom video. And its explanatory text reads, “We want to get those rubbers out of your wallet, remove them from your purses and pull them out from under the beds of every ward in the city.”

It’s called the Rubber Revolution Campaign. And it’s run by the Department of Health in Washington, DC.

DC's Department of Health launched the campaign in 2010 in an attempt to promote protected sex and decrease the district’s HIV/AIDS rate. According to UN statistics, Washington, DC has a higher HIV/AIDS prevalence rate than five PEPFAR countries today — 3 percent of all adults in Washington, DC ages 15 to 49 are HIV positive. In comparison, as of 2009, the US had a 0.6 percent HIV/AIDS prevalence rate.

“If we were going to make a big impact, then we needed to do something on a larger scale,” said Michael Kharfen, bureau chief of partnerships and community outreach at the DC Department of Health.

Washington, DC is one of only a handful of US cities with large-scale public sector condom distribution campaigns (New York City has one, and Los Angeles announced in May it would be rolling out a campaign. A few other cities, including San Francisco and Chicago, have launched publicly funded female condom distribution campaigns.) The DC campaign has gone from distributing half a million condoms in 2007 to five million in 2011. And in March, the Washington Post cited a study that showed that the Department of Health’s distribution of female condoms in one year saved more than $8 million in future medical costs.

In other parts of the world, public sector condom campaigns are standard, said Kharfen, while in the United States they are primarily run through nonprofit organizations. Countries including Uganda, Tanzania, Botswana and South Africa have run public condom distribution campaigns led by their governments. Kharfen added that there is a lesson to be learned from other countries’ efforts to promote condom use through social marketing and public education.

Why public sector condom campaigns are more common outside of the United States has to do with politics, said Lori Yeghiayan, associate director of communications at the AIDS Healthcare Foundation.

“There’s controversy in putting public money into condoms. There’s a small but vocal minority of the country that feels abstinence-only education is the way to go and condoms are promoting sexual practices that they consider immoral,” she said. “Maybe the funding is somehow less controversial overseas than in the US.”

Indeed, the US government has funded condom distribution campaigns in other countries. In 2010, PEPFAR approved more than $400 million to dedicate to sexual disease prevention in Africa, which includes the purchase and promotion of condoms. Finding statistics for public spending on the US’ purchase and promotion of condoms domestically is much more difficult, and according to the Science Speaks blog run by the Center for Global Health Policy, “Tracking US spending on condoms is difficult," it reads. "One study has shown a decline in US support for condom provision between 2005 and 2008, however, it is unclear if the analysis considered all US government funding sources, including PEPFAR.”

“The feedback that we get is nonprofits can’t afford to keep up their supply,” she said. “I think if there was more of a commitment by city health departments and if nonprofits could help distribute, I think that would be a good role. To come up with the funds themselves is a real struggle.”

With President Obama’s National HIV/AIDS Strategy, said Kharfen, the US is just starting to jump on the bandwagon. He added that other city-wide and state-wide health departments, including Philadelphia, Los Angeles, and Washington State, are beginning to set up campaigns and have asked DC’s Department of Health for advice.

“That is a key component of how you prevent HIV,” he said. “Particularly with the development and release of a national strategy, there has been a concerted partnership between states and countries to ramp up this effort. We're no longer just accepting the fact that there's going to be 50,000 to 60,000 infections a year. That's not acceptable.”

The first phase of DC’s campaign launched in 2010 and focused on promoting the availability and accessibility of condoms. The DOH recruited community partners and local businesses to receive condoms from the DOH for distribution to DC residents. Now, DC residents can also order condoms directly through the Rubber Revolution website.

The second phase of the project has focused on the promotion of and education around condom use. Positive messaging and humor are used in an attempt to erode the taboo that usually accompanies discussion of condoms.

“There have been public health messages about condoms in the past, in the 80s and 90s, that if you don't use this you're going to die ... Our message has been, we want you to do this, because it's good for you in an enjoyable way,” he said. “We've really tried to change the conversation around condoms, make it a message that also has some appeal to it in terms of humor.”

Indeed, the sleek site uses humor and word play, like “here are some additional condom facts you can ‘bone up on,’” and it engages the reader with quizzes like, “what kind of condom are you?” On June 5, the campaign announced that it won the Hermes Creative Platinum Award, awarded by the Association of Marketing Communication Professionals for “achievement and service to the communication profession.”

To ramp up its own effort, Department of Health also recently launched a version of the Rubber Revolution website for smart phones. DC residents can even get free condoms via text message.

DC, it seems, has its residents covered. The question is whether other cities will follow suit.

More from GlobalPost: A Daughter's Journey, Part I: Seeking answers on HIV/AIDS