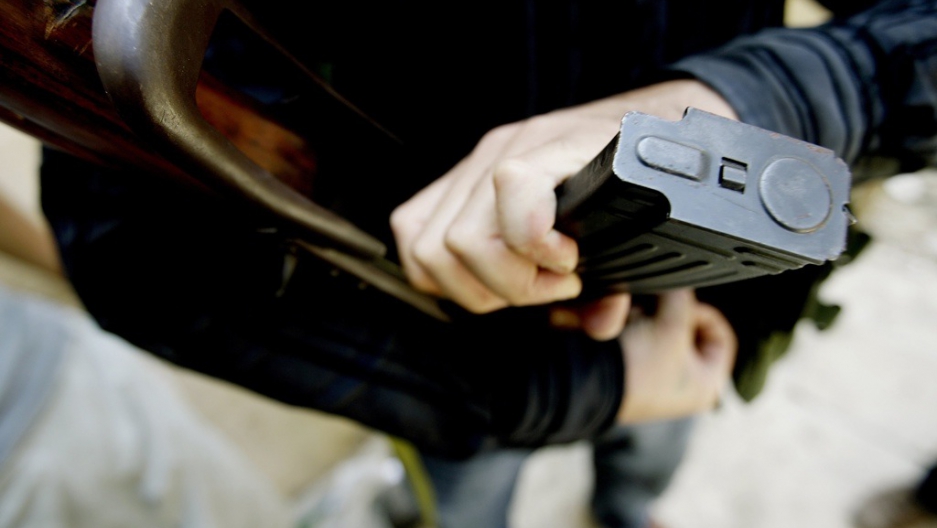 As Syria descends into civil war, a member of the feared shabiha, a paid gang that viciously fights for President Bashar al-Assad, said he is ready to kill women and children to defend his friends, his family and his president.
Credit: Joseph Eid
Share
.gp3_story_content .pager { display:none; }

LATTAKIA, Syria and BEIRUT, Lebanon — As Syria descends into civil war, Abu Jaafar said he is ready to kill women and children to defend his friends, family and president.

“Sunni women are giving birth to babies who will fight us in years to come, so we have the right to fight anyone who can hurt us in the future,” said the Allawite militiaman, a member of the ancient offshoot of Shiite Islam to which Syrian President Bashar al-Assad and the powerbase of his regime belong.

With his massive, tattooed muscles, shaved head, bushy black beard and trademark white trainers, Abu Jaafar, 38, looks every bit the figure of terror that is now imprinted on the international conscience. It is militiamen like Jaafar that are believed responsible for recent massacres in Houla and Qbeir, in which nearly 200 Sunni civilians were killed, many of them women and children who were stabbed to death.

Though he has a wife and children at home, after a day lifting weights at the gym and having drunk some local Arak to get in the mood, Jaafar spends most evenings in the nightclubs of Lattakia, the port city on Syria’s Mediterranean coast where regime forces this week attacked a rebellious village.

As a member of the mafia militia who grew up smuggling commodities, appliances, drugs and guns between Syria and Lebanon at the behest of Assad’s extended family, Abu Jaafar has no problem getting past the nightclub bouncers.

Except when the “mualem,” his master, calls.

“If I get a call from my boss then my whole day is changed,” he said. “When I leave the house, I don’t know when I will be back.”

Packing up the Kalashnikovs, pistols, machine guns and grenades he said were given to him “by the government,” Jaafar joins his gang of 100 shabiha — the Allawite militia named either after the Arabic word for ghosts or the old Mercedes shahab popular for its smuggling-sized trunk — and sets off to crush the Sunni Muslim protesters who dared rise up against his president.

More from GlobalPost: Syria at a “tipping point”

In an interview with a GlobalPost reporter in Lattakia, Jaafar gave a frank and unique insight into the violent, disturbed world of the shabiha, a group that suffers from a dangerous cocktail of religious indoctrination, minority paranoia and mafia roots.

The massacres in northern Syria, which UN officials, eyewitnesses and Human Rights Watch all concluded were perpetrated mainly by shabiha from neighboring villages, triggered a wave of international revulsion.

US officials raised the prospect of military action even as analysts described the marauding shabiha as a “Frankenstein” now beyond the control of the president. The regime blamed both massacres on foreign terrorists.

Like many of Syria’s estimated 2.5 million Allawites, a small mystic off-shoot of Shiite Islam which forms just 12 percent of the country’s population, compared to Sunni Muslims who represent 75 percent, Jaafar said he grew up struggling with poverty.

“My story is similar to all shabiha: I was born in a small village and didn’t finish school. Instead I went to work with my father in our lemon farm,” he said.

It was during his military service that Jaafar first got recruited into the murky world of Syria’s security services, where uniformed officers worked with plain-clothed thugs in regime-sanctioned smuggling.

“I was bigger than the others so I got picked to be the bodyguard of a senior officer,” he said. “After military service he asked me to be his man in dealing with some Allawite smugglers.”

Through the late 1980s and early 1990s, Jaafar lived the gangster high life, plying his trade in well-organized smuggling networks, anchored on its control of Lattakia’s port.

Food, cigarettes and commodities subsidized by the Syrian state would be smuggled from Syria into Lebanon, then in the midst of a civil war, and sold for massive profit. Luxury cars, guns and drugs, meanwhile, would flow from Lebanon up the Bekaa Valley and into Syria’s tightly restricted, Soviet-style economy established under Hafez al-Assad, the country’s former dictator.

“They were noted for their brutality and cruelty and their blind devotion to their leaders,” writes Yassein Haj Saleh, a historian and dissident. “The shabiha were untouchable and operated with impunity. If there were ever a conflict between the shabiha and the local authorities, the authorities would not dare defend themselves.”

The impunity stemmed from a single, but all powerful source: The direct links between the shabiha and the Assad family.

In May 2011, the European Union imposed sanctions on Assad's first cousins, Fawwaz and Munzir, for their involvement in “the repression against the civilian population as members of the shabiha.”

Syria experts say members of the shabiha would be carefully selected for their physical strength, lack of education and blind loyalty to the Allawite sect and the Assad family in particular.

By the mid 1990s, however, the shabiha were beginning to get out of control and Hafez al-Assad ordered his elder son and heir apparent Basel, famed for horsemanship and a furious temper, to bring the militias to heel. He did so, but soon after died in a car crash, catapulting his awkward younger brother Bashar, then an eye doctor with no military credentials, into the presidency.

Following Basel al-Assad’s crackdown, Jaafar said he left his gang and opened a liquor store in Lattakia. He continued to exercise his biceps, which are now emblazoned with a tattoo of the zulfiqar, the sword of Ali, the son-in-law of the Prophet Mohammed, who Shiites follow as the rightful inheritor of Islam — the root of the the great divide with Sunnis.

“Last June, friends from the shabiha asked me to return to work with them,” Jaafar said. “They said we must defend President Assad and his family and keep the power for the Allawite sect.”

Soon, Jaafar’s pay of about $20 for a day’s thuggery had risen to a steady monthly salary of about six times the average state wage.

“We started by facing the protesters, but when the opposition became armed we attacked them in their villages,” Jaafar said. “In addition to our salaries we take whatever we can get during the attacks: TVs, video players, electronics.”

But the shabiha don’t just attack and steal. Eyewitness accounts speak of dead children, some with hideously deformed faces, where the machetes split their skulls. Such extreme violence triggered an international outcry earlier this month.

“Whole families were slaughtered,” Abu Ahmed, a resident of Houla who witnessed the immediate aftermath of the attack, told a GlobalPost reporter in the area. “Women and children were shot from close range or slaughtered with knives. The shabiha did all of that.”

Jaafar defends the government’s crackdown by repeating the regime’s long-held claims — which are now increasingly becoming true — that the armed opposition is receiving support from religiously conservative Sunni Muslim states like Qatar and Saudi Arabia.

“We got money and arms from our government to fight those Wahhabi radicals who will force my wife and daughters to wear the veil and will close all wine shops,” Jaafar said.

In addition to fears of rising conservatism is a lethal strain of religious hatred and a sense of persecution. Jaafar argues that the Sunni have held power wrongly for more than 1,400 years, since the death of the Prophet Mohammed, and that the right balance in Syria was only restored after Hafez al-Assad seized power in 1970, when he stacked his massively expanded army and security services with an almost exclusively Allawite power structure.

Leading analysts on Syria now see the escalating violence perpetrated by the shabiha as beyond the control of the president, blunting any hopes for implementation of the UN-Arab League ceasefire plan, let alone a negotiated solution to Syria’s crisis.

“The regime has been spawning militias, as deep down it is a militia pretending to be a state,” said a leading Syria analyst based in Damascus, who asked for anonymity to speak freely. “The Frankenstein is now completely out of control.”

Paul Salem, director of the Carnegie Middle East Center, said President Assad, who took power in 2000, had presided over “a state that has become a kind of mafia extortion network” in which militias and the businessmen who pay them have grown beyond his control.

“Bashar is the president but he does not command. In Syria it is not about constitutional authority but about kill or be killed, and Bashar is not the top killer. He’s a prisoner of the presidential palace,” Salem said.

Yet the shabiha who killed women and children in Houla arrived by military escort. The defected former army officer said that during his service in the military it was known that Maher al-Assad, Bashar’s much feared hardline younger brother, had established networks of shabiha “to do the regime’s dirty work.”

“Each group of shabiha is linked to a security officer who takes direct orders from Maher,” he said, suggesting also that the gangs were becoming self-financed from looting and extortion.

The way Jaafar tells it, however, money is not the prime motivator for the violence that follows the call from mualem.

“I know the Sunnis will take revenge for what we have done. I am fighting to guarantee a good future for my sons and grandsons. So this is the final battle: Win, or die. There’s no third choice.”

A GlobalPost reporter in Lattakia, Syria contirbuted to this report. Hugh Macleod and Annasofie Flamand contributed from Beirut, Lebanon, with additional reporting by Rami Aysha.