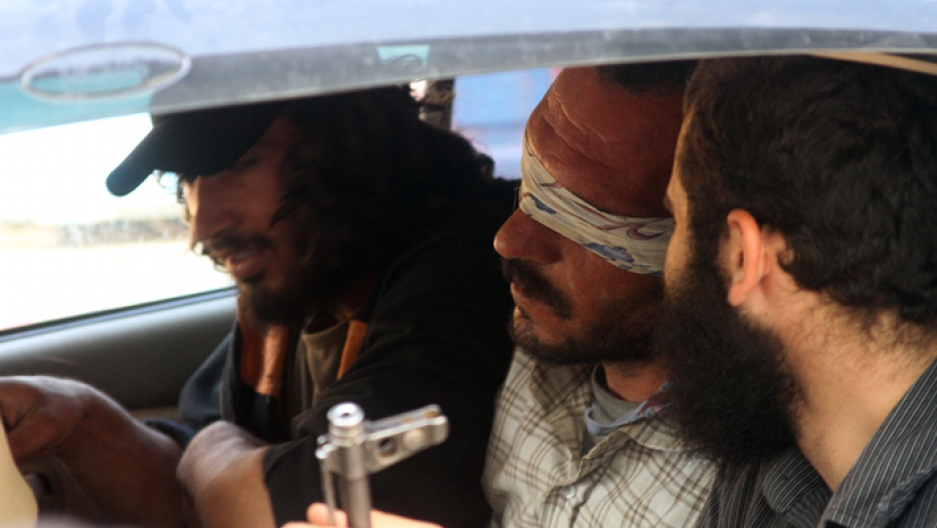 Ahmed Hasseba sits blindfolded in a car that later took him to a rebel base in Jabal al-Zawiya, Syria, where he was imprisoned.
Credit: Tracey Shelton
Share

JABAL AL-ZAWIYA, Syria — A quiet knock sounded from one of the prison cells. Rebel fighter Abou Reach stood up from the group of fighters relaxing around their rebel base here to respond.

On the floor inside sat Ahmed Hasseba. A chain stretched from his left leg to the ceiling of the small concrete cell. He sat on a thin mattress and blanket. A jug of water and a plate of untouched french fries lay at his feet. His head hung low, his eyes teary and desperate. Fear hung thick in the room.

While sympathetic Arab states like Saudi Arabia continue to help fund the Free Syrian Army’s purchase of heavy weapons, prisoners like Hasseba are also doing their part. Almost all the prisoners the rebels capture are quickly traded back to the government or families for cash, which is used to buy small arms.

As such, the prisoners have proven an important resource, rebels say. For the government, which is battling defections on a daily basis, bringing sympathetic soldiers, or paid militiamen, back into the fold appears to be a priority.

More from GlobalPost: Inside Syria: You'll never guess who is arming the rebels

As Reach entered the cell, Hasseba pleaded with him, saying his throat hurt and that his leg was causing him pain. Abou Reach reassuringly patted him on the shoulder and told him he would bring medicine tomorrow. The man broke into tears and claimed his innocence as Reach left the room and locked the cell behind him.

“Shabiha,” he whispered under his breath with disdain, referring to the plain-clothed government militia that many in Syria blame for the worst of the regime violence.

Two other prisoners shared the room next to Hasseba. This cell was long but narrow, with one thick mattress and a blanket taking up half the cell. The other half was bare concrete. These men were not chained but the door was padlocked. One of the prisoners had a bandage on his head, an injury the men said he acquired during his capture. He was also identified as shabiha.

The Free Syrian Army commander Asad Ibrahim said shabiha were civilian militias paid by the regime to attack and kill civilians. It is shabiha forces that activists believe were behind the recent massacre in Houla. Here the term shabiha is more spat rather than spoken, indicating the level of disgust the men feel toward those who would kill their countrymen for money.

Hamza Fatahallah, a member of the rebel group in charge of these prisoners, said that members of the shabiha are usually seized from their homes after a rebel-led investigation identifies their crimes. Despite the obvious anger rebel fighters felt toward such men, there was no indication of abuse. They appeared to receive adequate food and medical treatment.

More from GlobalPost: Complete coverage from inside Syria

“We deal with them according to the principles of Islam,” Fatahallah said.

The third prisoner was Ibrahim Wanoose, a government army driver who was caught by the group after crashing his vehicle two months ago. Members of the army and regime security forces are usually caught during battle, the commander said. But Wanoose’s case was different.

“We found Ibrahim in a nearby village after the crash,” he said. “He had injuries to his head and leg so we brought in a doctor to treat him. He is a low-ranking officer. I believe he didn’t kill anyone. He is a good man.”

Wanoose is Allawite, the Shiite minority that dominates the Syrian government. The other two prisoners were Sunni, the same sect as the men that make up this rebel battalion.

“They are keeping me to make a bargain to release their captured prisoners. I’m waiting for the answer from the authorities,” Wanoose said sheepishly, his head always hung low.

The rebels appeared to show more respect toward Wanoose, always referring to him as a “good man.” Whenever the other prisoners left the cell they were escorted blindfolded. Wanoose, however, walked freely. Despite the constant pats on the back by the men and reassurance that he would be home soon, Wanoose appeared to grow increasingly despondent every day.

The other prisoners came and went. For Hasseba, the group received $500, Fatahallah said. Occasionally prisoners can also be exchanged for weapons directly. The group has in the past received up to two Kalashnikov rifles for one prisoner.

“We send them back home for a small amount of money on the condition they do not return to the regime,” Fatahallah said.

In some cases, prisoners decide to join their rebel captors. Fatahallah, himself an army defector, said some of the prisoners have joined their ranks and “carried out many successful operations” against the regime.

“Once we caught a mercenary. He was very close to the regime. We later succeeded in negotiating for the release of 15 civilians in exchange for this one man,” Fatahallah said.

A similar deal was underway for the release of Wanoose. But so far the regime had not been willing to negotiate for a low-ranking officer.

When asked privately of his hope for the future of Syria he replied, “If I am released I will return to my village, not the army. I am a simple man. I hope only that good people will dominate and have authority in Syria.”