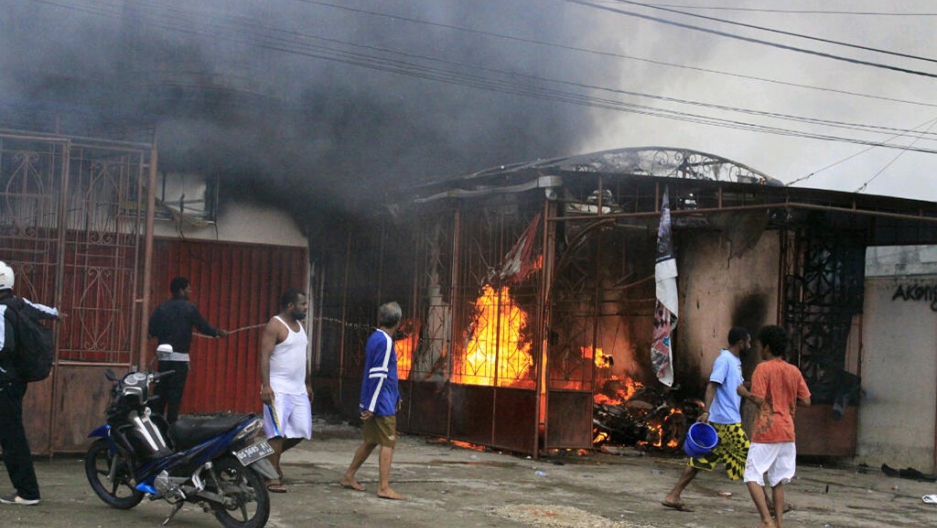 Residents try to extinguish a burning residence torched during riots in the town of Waena in Indonesia's Papua province, Waena on June 14, 2012. There was also unrest in the provincial capital Jayapura.
Credit: STR
Share

Police in the Indonesian province of Papua have shot dead a pro-independence activist sparking a wave of riots.

AFP reported that the man was shot in the town of Waena during a police raid.

"He was armed. Police asked him to surrender but he didn't. Police shot at him, hitting his hip and leg. He died on the way to hospital," National police spokesman Muhammad Taufik is quoted as saying, identifying the deceased only by the initials "MT".

More from GlobalPost: Violence in Papua blamed on military

The killing has angered locals and prompted some to torch shops and vehicles in Waena and in the provincial capital Jayapura, Reuters reported.

"This is not law enforcement, this is ridiculous," human rights campaigner Markus Haluk told the news agency. "Security forces are using the excuse of law enforcement to shoot, using the classic excuse of the separatist group stigma."

A low-level insurgency for independence has existed on Papua, which is Indonesia's easternmost island, for decades.  However, the Jakarta Post says "this moment could be considered one of the bleakest times in Papuan history," citing the recent deaths of several civilians and security personnel.