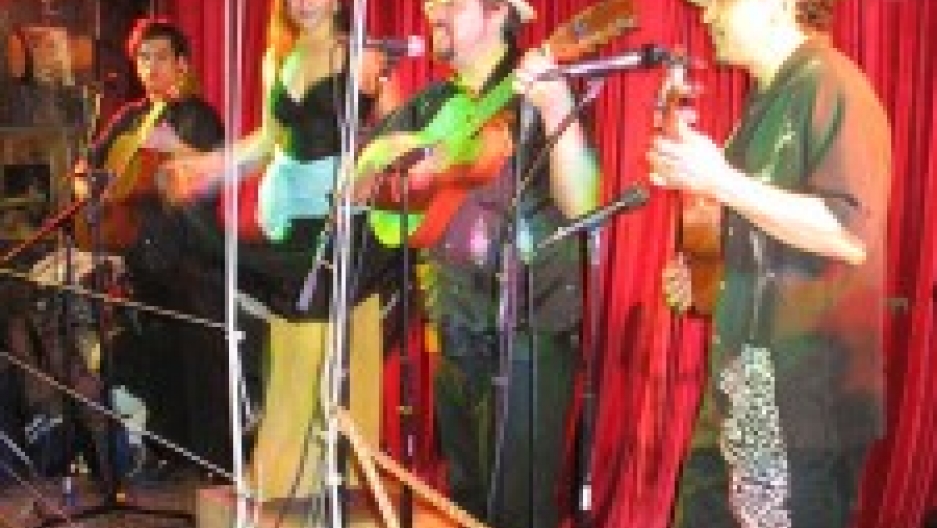 The Mexican state of Veracruz is nestled along the Gulf of Mexico’s central coast.

It’s a place of beaches and crumbling colonial glory, in most respects a far cry from the bustle of New York City. One thing the two places share, though, is son jarocho, a musical style native to Veracruz that’s taking root in New York thanks largely to the group Radio Jarocho.

Son jarocho music has a great, forward propulsion that comes, perhaps obviously, from the feet. The percussion in son jarocho is zapateado — a dancer stomping a rhythm out on top of a wooden platform.

Radio Jarocho’s Julia del Palacio says zapateado is actually born out of the rhythm of indigenous marches — songs played during these marches pick up the rhythm of the crowd walking down a street.

Del Palacio took some lessons in jarocho basics, but she learned the most from the source — fandangos, communal parties in Veracruz where people bring instruments and play traditional songs.

Radio Jarocho started out 10 years ago playing the son jarocho classics. They recorded an album of classics in 2009. For their new album, though, they wanted to write their own songs.

“There’s nothing we could give to son jarocho if we keep playing traditional songs, or rearranging traditional songs,” said Gabriel Guzmán, the band’s founder and main songwriter. “So we thought maybe if we have the other approach, and we become a band that writes, produces, and plays their own songs, we can give something else.”

One part of this new approach is adapting jarocho traditions to the motion of New York City life.

“We took a san jarocho rhythm, theme, and then we added lyrics that were more in tune with where we live, or what we think about love, and less about birds and rivers and flowers and stuff like that. Which we love, but that’s not our environment,” Guzmán said.

Another way their originals diverge from the older songs is in their brevity.

“Here’s a song for you, boom, there it is,” del Palacio said of the approach on the new album.

“Like a punk band!” Guzmán said, laughing. “The songs are short and really direct and there’s no time for more.”

Most songs on the new album clock in around four minutes. At fandangos, solo after solo push songs toward 10 minutes.

“’Cafe Café’ I started with the phrase ‘Amada Marcelina’ which is part of a very famous song called ‘Colas,’” Guzmán said. “So there’s echoes everywhere: on the zapateado, Julia, when she’s dancing, or when there’s little parts in the original songs, definitely I think there’s echoes of the fandango tradition. Because that’s the purpose: we come from there, and we’re trying to do our own thing.”

Their original songs still have this emotional balance that del Palacio says is fundamental to son jarocho.

“It’s very lively at the same time that it deals with the not-so-happy-elements of life in Mexico," del Palacio said.

The chorus goes “Sad, the night without a moon; sad the sea without foam, but the saddest is to live without hope.”

And that’s sad in any language.