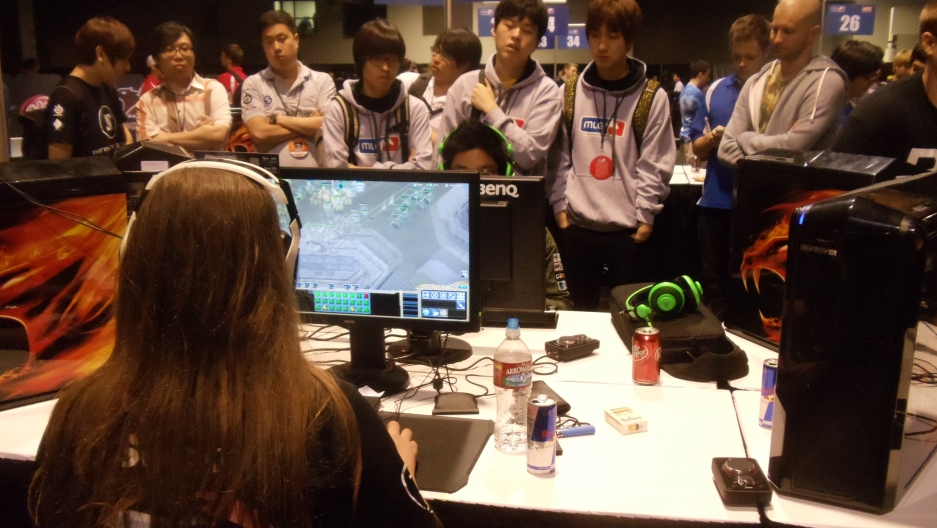 As the Heat faced off against the Celtics last Friday, earning the highest neilsen ratings in NBA history, another competition was breaking records as well — Major League Gaming's Spring Chamipionship.

Professional gaming, known as esports, still barely makes it into the traditional press despite a string of recent successes. When it does get mainstream coverage, the nuance is often left out.

“Yes, people play video games for a living. Esports is a thriving business — and even a government-supported one in South Korea, where players are rock stars who earn well over six figures thanks to endorsement deals,” read one article for Time’s blog Techland last week, a few days before North America’s biggest esports event of the year, the Major League Gaming (MLG) Spring Championship in Anaheim.

Whether or not the traditional press noticed, the excitement at MLG Anaheim was high, especially when the famous Korean Starcraft: Brood War players made their first public appearance in North America. The players, famous enough to play Starcraft in airplane hangers that accomodate large crowds, are bringing their celebrity status to the west for the first time.

“This is the happiest moment of my life,” said David Ibera, 27, after the former Brood War professionals took to the stage to introduce themselves.

The MLG Spring Championship was, by all reckoning, one of the largest esports events ever in the west. About 20,000 spectators came to watch top gamers duke it out for tens of thousands of dollars in prize money. MLG founder and CEO, Sundance DiGiovanni, said the event's live stream had four million views.

“Consider this a big hug to all the people who made this weekend possible. More than 4 million people tuned in to watch our streams,” he tweeted. Whether or not those four million views were concurrent viewers to the stream is unclear and, also, very unlikely. Concurrent stream viewers have rarely surpassed 200,000.

But the fate of esports may be changing with revelations that CBSi, the network's online content branch, may be ready to broadcast esports on television.

“I think we have a clear path to doing something on TV this year. We’re going to meet with some of our partners," Digiovanni said. "There’s a publisher who is interested in it. There’s a title that we think will work. We’re going to see if we can bundle something up. It’s got to be additive, though.”

Some fans are sketpical of MLG’s push into the mainstream and television broadcasting. For years, professional enthusiasts have either watched games live or, with introduction of new technologies, watched live streams on the internet.

“I’m not sure if moving to television is exactly a positive step,” Richard Morgan, a 20-year-old student, told GlobalPost from the floor of the Anaheim competition. “Our platform works well and moving it to the mainstream might cause problems.”

Esports suffered a setback in 2008 when ESPN added competitive gaming to its sports coverage, only dropping it altogether soon after. It was an embarrassment few fans want to see repeated.

The details of a possible broadcasting deal remain unknown. But if South Korea is anything to go by, exposing the general public to esports could have a huge affect on the industry. In South Korea, esports is on par with any professional sport.