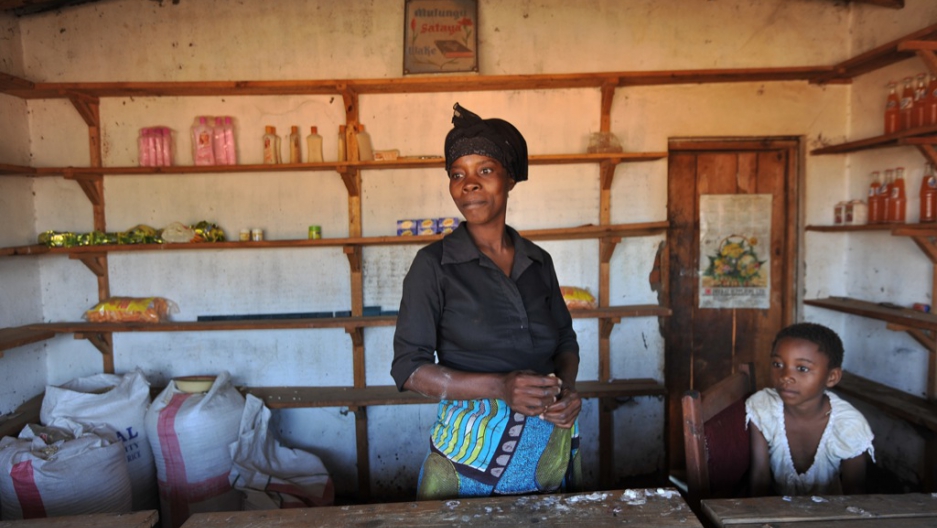 Gladys Josephat, 35, poses with her children in her small shop that she got from a micro finance loan run outside Lilongwe on July 14, 2011. Malawi's microfinance lenders are giving would-be business owners access to capital in a country where 81 percent of people do not have a bank account. Until recently, commercial banks hadn’t bothered to reach out to impoverished Africans in rural areas because they saw little profit potential. That’s changing.
Credit: ALEXANDER JOE
Share

Those are just some of the challenges faced by millions of Africa’s poorest trying to access financial services in rural communities in Sub-Saharan Africa.

Until recently, commercial banks across the continent hadn’t bothered to reach out to impoverished Africans in rural areas because they saw little profit potential. Instead, they focused on wealthier clients with larger transactions, which had a better chance of surpassing the cost of the bank infrastructure and staff.

“Current operating models are very much focused on serving other clients who are richer and have larger transactions on average, and thereby it’s very much heavy on brick and mortar infrastructure and personal attention,” said Benedikt Wahler, a manager at Roland Berger Strategy Consultants GmbH in Nigeria.

“Those two things contribute to high transaction costs that would not be feasible for the kinds of transactions volumes that you see from low-income households.”

But now, the potential for billions of dollars in deposits from people earning less than $10 per day has spurred many financial institutions to reconsider the way they do business. Now, they hope to lure the 95 percent of the estimated 498 million adults in Sub-Saharan Africa who earn less than $10 a day. This group could account for a potential $59 billion in deposits, according to Roland Berger.

Bigger banks now collaborate with non-governmental organizations (NGOs) to reach those most in need.

For example, Barclay’s Bank has been working with humanitarian organizations CARE International UK and Plan UK in an attempt to provide facilities to “unbanked” people in Sub-Saharan Africa with the initiative Banking on Change – helping to establish Village Savings and Loans Associations (VSLA) in poor communities and to promote saving in small amounts.

These VSLAs encourage groups in rural communities to start saving in small amounts while accumulating funds that can then be borrowed at a low rate of interest.

And other organizations such as the Savings Banks Foundation for International Cooperation (SBFIC), have worked to teach poorer people how to increase their savings and to manage risk better.

Analysts said that while it is important to provide the facilities for people to be able to save, it is also essential to increase financial literacy — so people realize that in spite of the fact they earn little, it is possible for them to save.

“People do not understand the concept of savings, so you would ask them if they ever saved and they would say they never have any extra money to put aside,” Sandra Sequeira, a lecturer in development economics at the London School of Economics.

But one of the biggest challenges remains geographical. In some far-flung rural areas, people must walk for hours to get to their closest bank branch. Another problem is the high costs involved in building banks in rural communities.

Telecommunications technology has proved an effective way of enabling banks to overcome these issues over recent years. Some providers allow users to transfer money and even pay bills or buy groceries with their phones. According to research conducted by the World Bank, in Sub-Saharan Africa this type of banking has expanded to become 16 percent of the market.

“It is a technology that can easily reach anyone in the country, with the coverage rates of cell phones in most developing countries being incredibly high,” said Sequeira.

But while analysts said the use of mobile phones to carry out transactions has been a successful method of getting to more of the world’s unbanked, banks can still do more.

Banks such as Equity Bank in Kenya have led the way using methods such as offering youth savings accounts at schools and a “banks on wheels” scheme, which used modified jeeps to visit villages deemed too small for a bank branch. The bank is now East Africa’s largest, with 50 percent of all bank accounts in Kenya and 4.9 million clients. It is now working to expand further into Uganda, South Sudan and Rwanda using initiatives such as agent banking, which allows banks to appoint non-banking businesses such as supermarkets, gas stations and pharmacies to provide basic banking services.

“Agent banking also now allows those with lower incomes to access financial services from commercial banks in some markets in Africa,” said Ochieng.

Analysts stressed that to improve national economies, it is important for people to be able to access financial services.

“If you can get commercial banks operating in poor areas you get a financial deepening of those areas and development,” said William Shaw, a visiting scholar specializing in emerging markets on the International Economics Program at the think-tank Carnegie Endowment for International Peace in Washington.

“Banks are really important to economic development because they serve an important intermediary function and they provide an expertise to evaluate projects so they can lend efficiently," he added. "And they give people confidence that they can place their money [there] and get it back when they want.”