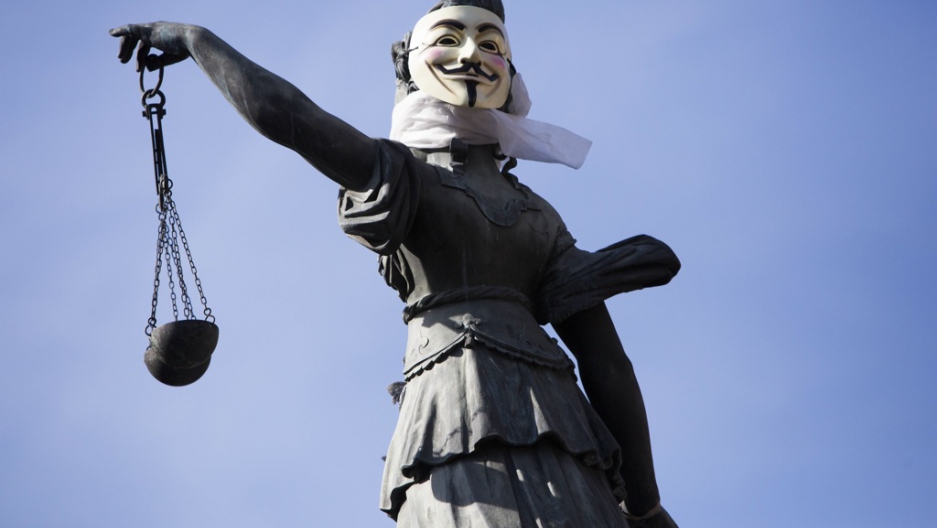 A Guy Fawkes mask graces the Justice Fountain during the Blockupy protests on May 17, 2012 in Frankfurt, Germany. Long considered immune from the crisis, and from the protests that have accompanied it elsewhere, Germany's economy is now showing signs of weakness. Is this safe haven not very safe after all?
Credit: Carsten Koall
Share

BERLIN — As the euro zone crisis lurches from bad to worse, Germany has seemed like an oasis of prosperity and stability.

Unemployment has actually dropped. Exports have boomed. Europe’s powerhouse economy has seemed almost immune from the deep economic contractions and debt spirals many of its neighbors were succumbing to.

“Germans have believed for a long time that they are invincible in the crisis,” says Sebastian Dullien, professor for International Economics at HTW Berlin – University of Applied Sciences.

That could now be over.

Figures released on Friday show that German exports fell in April, decreasing by 1.7 percent, accelerating from a fall of 0.8 percent in March. There was even more concern about imports. Seasonally adjusted, they dropped by 4.8 percent, the worst decline in two years, indicating a possible slowdown in domestic demand.

These disquieting figures echo other bad news earlier last week. German industrial orders fell in April at their fastest rate since November 2011. The IFO business climate index fell in May for the first time in six months as concerns mount about contagion to Spain and Italy.

And the slump in Europe’s auto industry has started to affect Germany. Production fell by 17 percent in May compared to last year, while exports were down by 13 percent.

Germany is being affected not only by the slowdown in the euro zone, which accounts for 40 percent of its exports. Its income from emerging markets may also prove unreliable. China, for one, appears to be slowing, with JPMorgan Chase cutting the country’s 2012 growth forecast again, from 8 to 7.7 percent.

“The argument in Germany has so far been that we don’t need the rest of the euro zone because we can sell so much to the emerging markets,” Dullien explains. “It is completely insane that the Germans believe their economy is independent from the euro zone.”

Yet despite these worries — compounded last week as Moody’s downgraded six German banks — the country is still seen as a safe haven. Many billions have been stashed in its banks and bonds, as European investors and depositors park their money in Germany, despite the negligible (and sometimes negative) returns.

According to the European Central Bank, deposits in Germany rose 4.4 percent as of April 30 from the previous year. In the same period, deposits in Greece, Spain and Ireland shrank by 6.6 percent. Savers in those countries are terrified that their countries might default, exit the euro zone, and end up with a hugely devalued currency, wiping out their savings.

These savers are following the lead of big investors, who have pushed down the interest rate on Berlin’s 10-year bonds to its lowest on record.

Struggling countries hope Germany will take advantage of low interest rates to help collectivize the euro zone’s debt, in the form of euro bonds, thus make borrowing for other countries cheaper. However, the German government fears that such a move would remove the pressure on the peripheral countries to cut deficits, implement reforms and improve their competitiveness.

Another downside is that Germany’s own borrowing costs would inevitably rise. “If we were to have euro bonds, then Germany would be liable in full for all the other countries, and then [Germany] would definitely lose their Triple A rating,” says Bert Van Roosebeke, senior policy analyst with the Center for European Policy, based in Freiburg.

He thinks that even without euro bonds, Germany will end up being regarded as a greater risk. “Germany will tend to be liable for more countries and to a higher extent in the future. That is not going to have a positive effect on the rating. I don’t think Germany is going to remain this safe haven.”

The concerns about being liable for all these other countries’ debts has been at the core of the opposition to the euro bonds in Germany. In fact 80 percent of Germans oppose such a move. That is something Chancellor Angela Merkel is well aware of a she faces a tough re-election battle next year.

“She is in a very difficult situation,” says Van Roosebeke. However, he argues that is not just political expediency that is causing the chancellor’s stubbornness as she comes under intense pressure from abroad to budge on euro bonds. “I think she is convinced by what she is doing.”

At the same time, he argues, Germans are slowly coming around to the idea that Germany is going to have to pay in some way, along with strong countries like Holland and Luxemburg.

“It is probably going to be some hidden transfer, probably via the EFSF and ESM.”

After all, if Germany fails to rescue the other economies and allows a break up, it could be worse off itself.

In a recent poll, 43 percent of Germans said that the euro had been more negative than positive for the country. In fact Germany has benefited hugely from the euro membership. One obvious benefit has been that using the common currency means that its exports outside of the euro zone are far less expensive that they would otherwise have been.

Furthermore, if anything, Germany has actually benefited from the crisis – at least up to now.

For all the talk of Germany bailing out weaker countries, in fact Germany is in line to make a profit from the interest on the loans it gives them via the EFSF and the ESM bailout funds — assuming that the euro zone doesn’t split up and countries don’t default. Germany had earned some $380 million euros on its 15.17 billion euro contribution to Greece’s bailout.

“The perception from some of the German media that Germany is always paying is just wrong,” argues Dullien.

More from GlobalPost: Yes, they use the euro. And the economy is booming.

“You lend someone money at an interest rate which is higher than what you pay for it, in my eyes this is a loan and even if the person needs that money quite urgently at this moment, it still remains a loan and if you make a profit from it, that is not aid.”

At the same time German banks and companies have actually managed to reduce their exposure to peripheral countries, particularly Greece, over the past few years. However, they are still quite significantly invested in Spain, Italy and France.

Moreover, it’s critical to remember that German institutions played a key role in causing the crisis.

German banks contributed to the mushrooming of private and sovereign debt in many euro zone countries. They lent cheaply to banks who in their turn lent recklessly. As such, despite the often moralizing tone, Germany bears some of the blame for the boom and bust that hit the periphery.

While Germany may have begun to reduce its exposure somewhat in terms of private banking, it is still vulnerable due to the so-called TARGET 2 system — a network through which banks clear cross-border payments. Under the system, a country like Greece, which has a lot of money flowing out, essentially issues IOUs to a country like Germany, where the money is accumulating. This has resulted in new massive debts accumulating. In the event of a default the losses would be shared across the euro zone’s central banks, although Germany’s Bundesbank is by far the largest creditor.

“Basically the Bundesbank has taken away the risk from the private sector,” says Dullien. “If the euro zone were to break apart it would now be less a loss of the banking sector and more of the public sector.”

In addition, if the euro crisis continues to spiral out of control, any defaults by the bailout countries would hit Germany hardest due to the size of its contributions.

The price of a break up would be “catastrophic” for Germany says Dullien.

Germany, along with the rest of the euro zone partners, risk losing the billions in guarantees as part of the bailouts to Greece, Ireland, Portugal and now Spain.

Merkel’s fixation on austerity, her push for a fiscal union, and in recent days her talk of a political union, have one common goal: ensuring that these countries do not take the loans as a license to return to their high spending ways.

At the same time if Germany does not act soon, then it may be too late to save the heavily indebted countries.

The prospect of Greece leaving the euro zone after its crucial election on June 17 is very real. If it does, and if German taxpayers were told the massively unpopular Greek bailouts had indeed been squandered, then that could have deep political repercussions.

“It might well be that the money Germany gave to Greece is going to be gone,” says Van Roosebeke. “That would be the first case. Then we are going to have to book that loss in the German budget. And we will have to see how the public reacts.”

Surely, such an event would rattle the foundations of the German economy — and with it, the security of all those billions seeking safe haven there.