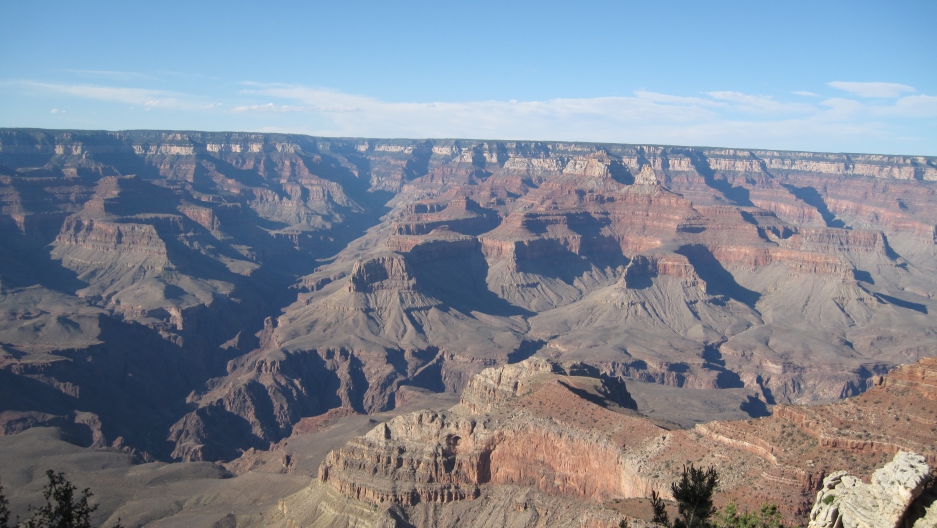 Grand Canyon: This gigantic gorge cut into the earth over millions of years by the mighty Colorado River overwhelms the senses and defeats attempts to capture it in words or photos.
Credit: Jean MacKenzie
Share

WILLIAMS, Ariz. — There are no words adequate to describe the Grand Canyon.

Magnificent. Awe-inspiring. Humbling. None of these come close. This gigantic gorge cut into the earth over millions of years by the mighty Colorado River overwhelms the senses and defeats attempts to capture it in words or photos.

I stand on the Southern Rim, watching the morning light change the colors from pink to gray to yellow to tan, and wonder how to approach it. Time in the canyon is measured in billions of years, but I have exactly one hour and 45 minutes to embrace its beauty before I have to rush off to check out of my hotel.

So I set off on a hike — the Rim Trail, which skirts the edge for several miles, offering breathtaking vistas and a chance to rub shoulders with wildlife. There are places where you can get out to the very edge and gaze into the immeasurable depths of this great wonder of the world.

It might sound like an adventure, but it really isn’t. The canyon has been thoroughly tamed. The trail has benches at frequent intervals, along with rest rooms, telescopes, and explanatory plaques.

You can get an audio tour on your cell phone, or book a ranger to take you around. The paths are wheelchair accessible, and for the overambitious, a shuttle bus shadows the Rim Trail to pick up anyone defeated by the altitude or the distance. Drinking fountains dispense spring water from the canyon, and for the shoppers, there are numerous boutiques selling Native American crafts.

I could not be more protected if I were at a local Wal-Mart. “What on Earth have we done here?” I thought. But just a glance at the majestic rock face calmed my grumpiness. Sort of.

At the Bright Angel Lodge, the smell of coffee wafts tantalizingly through the clean, fresh air, marred by the acrid smoke from some tourist’s cigarette. Perhaps people should not be allowed here at all.

The most exciting thing I saw were elk — lots of them. There was a whole family, the baby males with velvety multi-knobbed protuberances on their heads. There were a few squirrels, but the bulk of the “wildlife” consisted of dogs on leashes. Toy poodles look especially ridiculous in the Grand Canyon.

The elk were pretty tame, too. Not bothered at all by hikers or photographers, the elk calmly chomped on the wild grasses that grow along the trail.

I couldn’t help but wonder what the place looked like before we all got here with our guidebooks, our video cameras and our cigarettes.

At the entrance to the trail, a large sundial displays the names of various Native American groups: Hopi, Navajo, Apache, Southern Paiute, Hualapai, Havasupai, and the proud proclamation: “The Tribes Call the Canyon Home.”

Well, not so much. One tribe, it is true, the Hualapai, actually own and administer the Western Rim of the canyon, and I make a mental note to check that area out the next time I’m in Arizona.

But this is definitely white man’s territory. I feel a vague, nagging guilt, which I realize is silly, but all the superstructure seems so out of place here. In the Southwest, American history is much more tangible than it is on the East Coast.

Neighboring New Mexico is much more apologetic about the troubled record of relations between the first white settlers and the indigenous tribes. In beautiful Santa Fe, a plaque on the obelisk that marks the “Historic Plaza” at the center of town has enshrined political correctness in its message.

“Monument texts reflect the character of the times in which they are written and the temper of those who wrote them,” reads the plaque.

The monument stems from the Civil War era, which, we are informed, was “a period of intense strife which pitted northerner against southerner, Indian against white, Indian against Indian.”

True, but that is not going to get the “Indians” their land back. Where would we put Wall Street?

In Boston, where I spent my youth, we are told to say “Native American,” the word “Indian” now being reserved for residents of that very large country to the east of Pakistan.

Arizona displays no such reticence. Indians are big business in the state, and they are not shy about advertising.

Along Interstate 40, which runs east-west across the state, every exit has huge signs: “Indian City!” “Indian Pots! Indian Rugs! Handmade jewelry!” There is every sort of tat and tchotchke for the unwary tourist.

I stop for gas and lunch at a rest area in Navajo Nation, a semi-autonomous territory that covers parts of Arizona, New Mexico, and Utah. Navajo Nation is governed by the Navajo Tribal Council, and all the staff seemed to be Native American.

Democrats and Republicans are vying to win their support.

In 2008, the Navajo Tribal Council supported Barack Obama for president. Republican Party bigwigs including former presidential candidate John McCain have made an effort to woo Arizona tribes over to the Grand Old Party, reports the Navajo Post.

Some appear to be making the shift. The Navajo Post says:

It is likely the council will endorse President Obama this year. But some Navajo Republicans say it is time for a change, “we should endorse a conservative, someone that will support Navajo small business owners— Obama is killing jobs in Indian country,” said Johnny Goldtooth of Rock Point.

Driving into Navajo Nation, I feel the difference immediately. For one thing, gasoline was 60 cents per gallon more than I had paid the day before in New Mexico. A sign on the pump informs me that the taxes on the gas were levied, and would be collected, by the Navajo.

Remembering the Grand Canyon, manicured and trimmed into submission, I shrug and pay up.