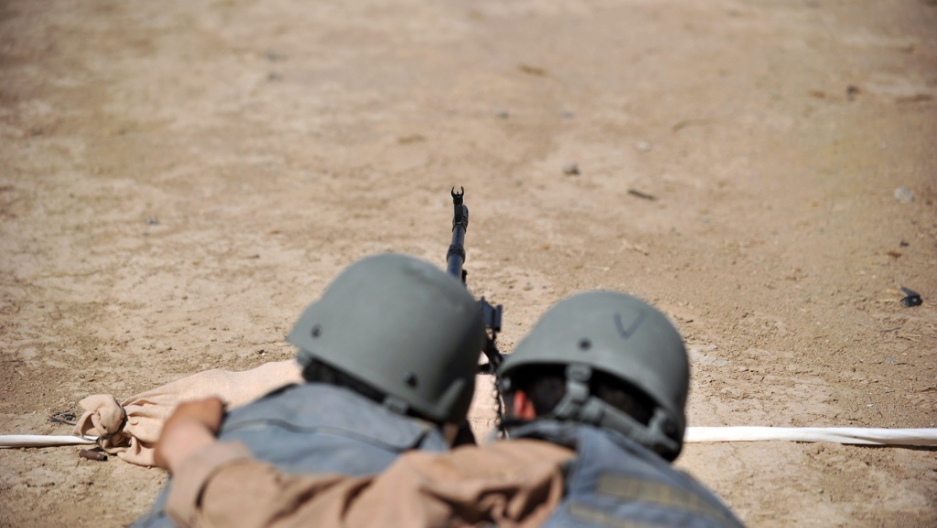 Afghanistan Uniformed Policemen (AUP) fire a Kalashnikov during a shooting lesson with US Marines at Camp Leatherneck in Helmand province on June 2, 2012.
Credit: Adek Berry
Share

KABUL, Afghanistan — The insurgents stepped down from a minibus in front of a half-finished building on a busy Kabul road. As one fired warning shots and headed inside, at least three others calmly filled their bags with ammunition and rocket-propelled grenades before following him.

From the upper floors, in the bright afternoon sunshine, they had a perfect view of their target: Afghanistan's parliament. It was not until the next morning, well after the battle was officially declared over, that the last of them died.

Hashmatullah Mohibi was at work in his convenience store when he saw the fighters arrive, dressed in local clothes and carrying Kalashnikovs. Asked later what this all meant, he said: "It's clear. If security was tight, how could these people come here to do an operation?"

Across town, more militants had set up in a second partially constructed building, causing chaos in a neighborhood favored by diplomats and wealthy businessmen. At the same time, a number of attacks took place elsewhere in the country.

More from GlobalPost: In Afghanistan, fears of a civil war

The Taliban described the events of that day in April as a “grand act of heroism” and, although casualty numbers were relatively low, the most ambitious guerrilla offensive of the last decade undoubtedly came at a crucial moment.

Many Afghans realize the occupation will soon draw to a close. And so all the interested parties —politicians, civilians and insurgents — are now maneuvering themselves into position for the post-US future.

US President Barack Obama confirmed the exit at a NATO summit in Chicago last month, when he claimed “we are on the right track,” and reiterated a plan to withdraw combat troops by the end of 2014.

What they will ultimately leave behind is the subject of a violent and increasingly urgent debate being played out in the cities, villages and mountains of Afghanistan.

As a former official in the Taliban regime, Arsalan Rahmani was heavily involved in recent attempts to negotiate with the rebels. He was a member of the High Peace Council — an internationally backed organization tasked with facilitating dialogue — and often spoke of his belief that a political settlement was possible.

Then, on May 13, he was shot dead in Kabul. The assassin reportedly used a gun fitted with a silencer and only needed one bullet to complete the job in broad daylight. A group calling itself the Mullah Dadullah Front, in homage to a notorious insurgent commander killed in 2007, claimed responsibility.

More from GlobalPost: What Obama isn't telling us about Afghanistan

Sara Sorkhabi, a colleague of Rahmani’s on the peace council, said they were being targeted “one by one.” She comes from Faryab, a province in the north of the country that has been slowly sucked into the war after years of calm.

Islamist militants from across the border in Uzbekistan and local fighters are active there.

“People are helping them, giving them food and a place to stay at night,” she said.

Central to NATO’s hopes for containing the insurgency after the withdrawal are the Afghan police and army, which now number around 350,000. But while Obama spoke of the “excellent progress” they have made, not everyone is willing to offer such an endorsement.

Attacks by Afghan soldiers on foreign troops have become common and last year a coalition report called the problem “a growing systemic threat.” Of perhaps more concern in the long term, however, are the feelings of ordinary citizens toward their own security forces.

From 2006 to 2009, Maj. Gen. Atiqullah Amarkhil served on an advisory board at the ministry of defense in Kabul. It was his final official role in a career that included a position as commander of the air force during the communist era.

He warned that today’s army does not have the support of ethnic Pashtuns, who view it as an institution dominated by men loyal to the old Northern Alliance movement that persecuted them in the past.

More from GlobalPost: Special Report: Women and Justice in Afghanistan

“This is the reason why there is a space between the people and the government,” he said.

The doubts that always clouded the NATO mission have assumed a grim finality for many Afghans now that the end is in sight. Time is running out for the key issues to be resolved and the fear is that the conflict will escalate for them long after it ends for America.

On the streets of Kabul the potential shockwaves of post-2014 life are already being felt, with house and land prices dropping dramatically.

Omid Ansari, a property dealer, gestured to an empty mansion opposite his office near the presidential palace. A year ago it was being rented to a foreign security company for $20,000 a month, he said. Since then, no one has been willing to pay even $10,000.

Similar stories can be found elsewhere in the city as wealthy Afghans and the expat community take their money abroad before what they say is a pending civil war and economic collapse.

“Right now there are lots of people ready to sell their properties. But there is no one to buy them,” Ansari said.