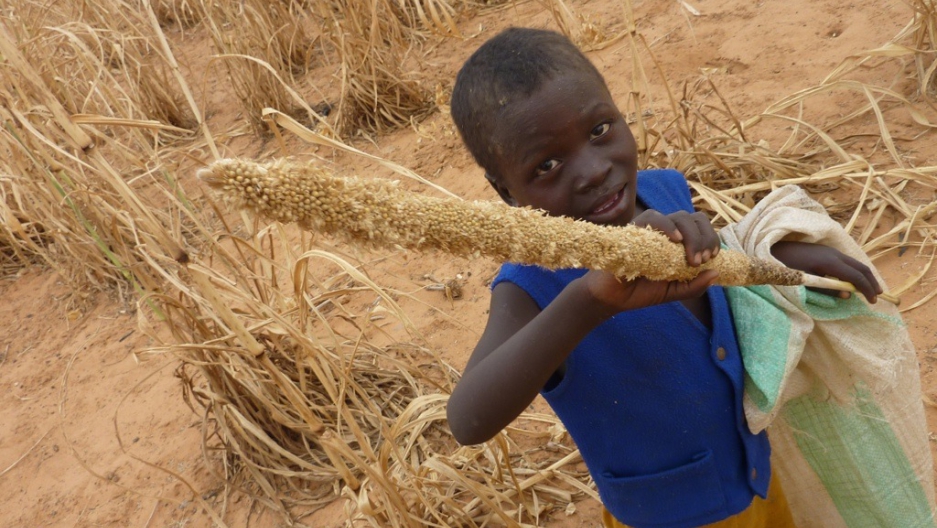 A young boy from Niger holds a millet cob eaten by locusts. The Food and Agriculture Organization warns that Mali and Niger, already coping with severe food shortages, are threatened by an influx of locusts from Libya.
Credit: Boureima Hama
Share

NAIROBI, Kenya — Colonel Gaddafi continues to wreak havoc on the desert parts of West Africa from beyond the grave.

First, his once-loyal Tuareg foot-soldiers, noting their patron's demise, stocked up with lots and lots of weapons before heading home to launch a separatist movement in Mali, and now a swarm of locusts is on its way threatening to tear through the meager crops of people already on the verge of starvation.

The Rome-based Food and Agriculture Organization (FAO) has warned that swarms of desert locusts are making their way south from Algeria and Libya towards the farmlands of Mali and Niger where aid workers are already warning of catastrophic food shortages affecting around 18 million people across the region.

The Gaddafi link? Desert locusts are common but controllable pests except when, as last year, civil war means the experts can't treat the breeding grounds to stop them swarming.

"In a normal year, Algeria and Libya would have been able to control most of the local swarms and prevent their movement towards the south, but insecurity along both sides of the Algerian-Libyan border is getting in the way of full access by local teams and by FAO experts who need to assess the situation.

"Libya’s capacity to carry out control efforts has also been affected in the past year,” said Keith Cressman, FAO Senior Locust Forecasting Officer.

The FAO added that insecurity along the Algeria/Libya border was ongoing and that the "political insecurity and conflict" in Mali might also hamper control efforts making.

If the gathering swarm gets really big it can stretch for several hundred square kilometers with as many as 80 million individuals in each square kilometer, according to the FAO. They can travel more than 130 kilometers a day and eat their own body weight each day.

"How many locusts there are and how far they move will depend on two major factors — the effectiveness of current control efforts in Algeria and Libya and upcoming rainfall in the Sahel of West Africa,” said Cressman.