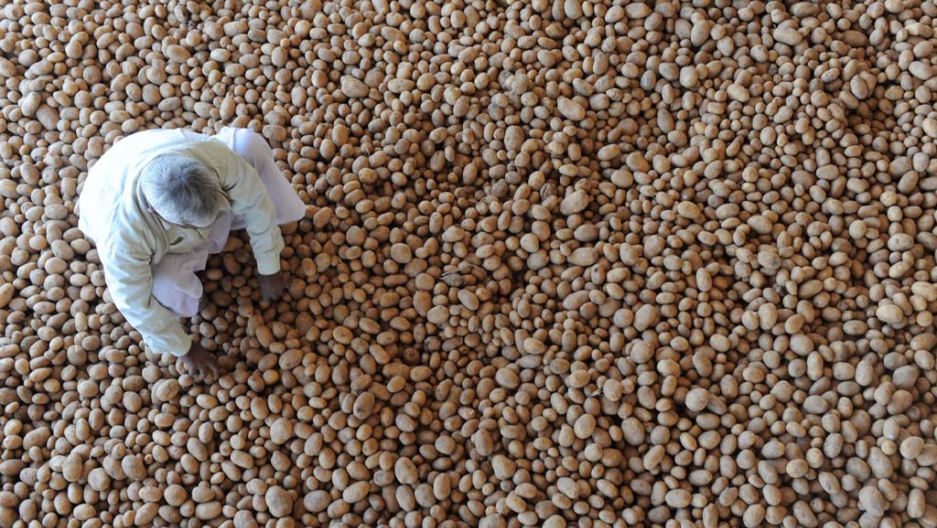 NEW DELHI, India — A 52-year-old handyman who has lived in New Delhi for 30 years, Ram Samujh has seen bad times before. But these days, as India faces an economic slowdown amid double-digit inflation, the future looks especially bleak.

“There's no more cutting back for me,” says Samujh, a soft-spoken, gray-haired man who carefully takes out a pair of rimless reading glasses. “I'm already down to only the absolute necessities.”

“I'm a daily worker,” said Samujh, whose skills give him a leg up on most Indian laborers. “One day I might get three jobs. But then I might go a week without any.”

Over the past three years, as prices for food and other essentials soared, Sadmujh was also able to charge more for odd jobs like installing new electrical outlets, repairing small appliances and fixing clogged drains. But with India's economic growth slowing to a nine-year low of 5.3 percent for the quarter ended March 31 and 6.5 percent for the fiscal year, Samujh's middle-class employers are also beginning to feel the pain — even as economists predict that prices will continue to skyrocket.

“Things are getting very expensive,” said Bharat Singh, who, as a sub-inspector with the Delhi Police, falls smack in the middle of the $4,000-$10,000 income bracket that economists here define as the middle class.

“Vegetable prices have gone up 25 percent. They are going to increase school fees 20 percent next term. We're no longer able to save any money,” Singh said.

“I'm afraid. I'm really afraid. How will I arrange all the things in the coming months, or coming years. I am afraid to see the future.”

How bad is it?

Many middle-class Indians like Singh — who has three sons, two in private schools and one in college — have already eliminated luxuries like going to the movies and adopted simple economies like eating vegetarian five or six days a week. As car owners getting by on relatively modest salaries, the middle class was hit hardest by the government's move to hike petrol prices nearly 10 percent last month. And though India's labor laws protect them from layoffs, they now face ever greater competition for a stagnating number of jobs, hiring freezes and, possibly, wage cuts — prompting a leading national news weekly to ask: “Was it just a mirage then?”

The short answer may well be yes. Or as Ruchir Sharma, head of emerging markets at Morgan Stanley in New York, puts it: India now has only a 50-50 chance of making it to the ranks of developed nations by 2050.

Though 6.5 percent growth no doubt looks pretty good to countries where a full-on recession is looming, India's economy slowed steadily throughout the fiscal year. And the nature of the growth was not too encouraging, either.

More from GlobalPost: Can Ford and GM catch up in India?

“A lot of the income growth is coming from people selling their land,” said Bibek Debroy, an economist at the New Delhi-based Center for Policy Research. “That's part of the India story, for better or for worse. Parts of India are getting urbanized. So I have a plot of land that is valuable, and I sell it off.”

Real estate gains — which don't create jobs — accounted for an unhealthy part of India's economic growth in the fourth quarter, when it slipped to 5.3 percent. Worse still, India needs to grow at nearly twice that rate to keep its head above water. Because of its expanding population, it needs to create about 12 million new jobs a year to employ the young people entering the work force — which might just be possible at a 9 percent clip, according to Debroy.

But even that's only the tip of the iceberg. To lift some 600 million farm laborers out of poverty, or near to it, India needs more than simple industrialization, it needs a complete metamorphosis. And over the past three months, its nascent manufacturing sector contracted instead of growing.

That means that the only thing trickling down these days is belt-tightening.

“The poor man's wages have risen quite swiftly until last year. That cushioned them against inflation,” Joshi said. “The high growth we saw allowed people to pay more for household services, more for their drivers, more to farm laborers. But can wages keep rising at the same rate if the economy slows to 6 percent? I don't think so.”

On Monday, Crisil lowered its growth forecast for this year to 6.5 percent from 7 percent. And that could well drop further, if the troubles in the euro zone get worse, oil prices climb back up, or India's government continues to falter.

“There's no point in asking for more money now, because nobody will give it,” Samujh said. “It's better to concentrate on keeping my clients happy.”

India's business leaders have called for stimulus measures, beginning with an interest-rate cut. And economists like Crisil's Joshi have predicted that some such moves are in the offing — such as fatter tax breaks for export- and labor-intensive industries, and a deep cut to interest rates if growth continues to lag below 6.5 percent.

But it will take more than rearranging the deck chairs to stop the ship from sinking.

“Reform is a generic word,” said Joshi. “You can't ignore the governance and execution aspect of things, which has led to some pessimissm about India right now.”

The conventional wisdom is that India's economic woes stem from “policy paralysis,” a catchphrase that refers to the current government's failure to push through business-friendly economic reforms like loosening the rules on foreign investment for big retailers like Walmart. And, indeed, as the caretaker of a weak coalition government, Prime Minister Manmohan Singh hasn't achieved any big bang reforms, like deregulating fuel prices or selling off beleaguered Air India to end a depressing cycle of multibillion dollar bailouts.

The recent move to hike petrol prices may signal that the economist PM is now ready to rock. And Joshi points out that every Indian government has typically taken a “firefighting approach” to the business of running the country.

“I would not lose hope completely,” Joshi said. “Now there is enough fire, so I would expect some action.”

But the paralysis runs much deeper than policy. And, ironically, the root of the problem may not lie with Singh's recalcitrant partners in the United Progressive Alliance (UPA) — who stopped him from throwing open the doors to Walmart. It may have originated with the very same middle-class Indians who are now complaining the loudest about the slowdown.

The reason? It was the normally apathetic middle class that first fueled the anti-corruption campaign led by social activist Anna Hazare, which brought tens of thousands of Indians onto the streets last summer. Now, as the mass movement takes on the character of a witch hunt, the calls for blood just keep getting louder. And the fear of being targeted in a Central Bureau of Investigation probe has brought the already sluggish bureaucracy grinding to a halt.

Leaving corruption aside for a moment, India normally functions less by policy than by edict. Sure, there's a law at the root of every government activity. But it translates into action only when, say, the minister of education or rural development issues instructions to the secretaries and joint secretaries who actually make things happen.

By “moving a file,” the bureaucrats clear the actual projects, choose the contractors, and so on. In the current climate of fear, however, these bureaucrats are demanding their instructions in writing, and their ministers are afraid to comply, say insiders.

“The damn problem is not coalition politics and FDI in retail and petroleum product prices,” said Debroy. “The issue is that no one takes decisions, full stop.”