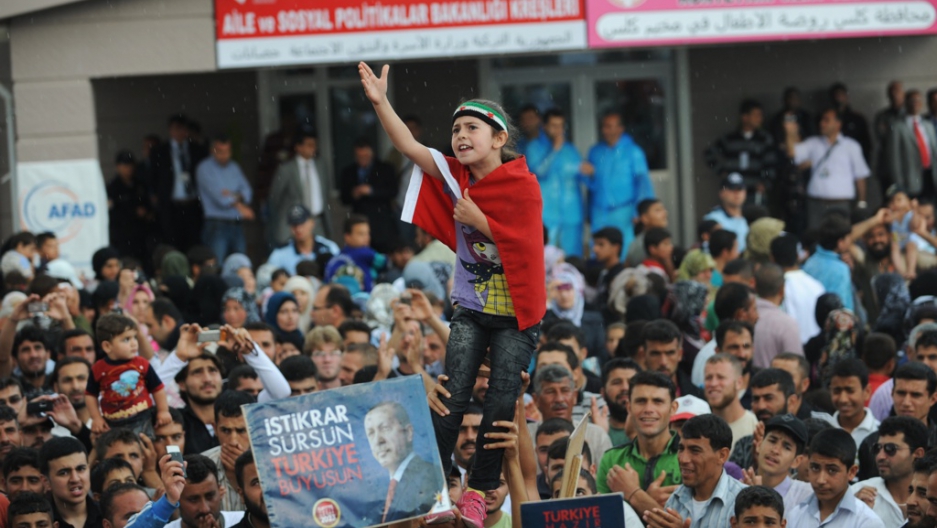 WASHINGTON — Turkey’s popular and outspoken prime minister, Recep Tayyip Erdogan, was treated to a hero’s welcome recently when he met with Syrian refugees for the first time since Turkey opened its doors to the thousands of people fleeing Bashar Al-Assad’s crackdown.

Erdogan’s pledge to defend the rights of the Syrian people and his call for Assad’s removal, however, fell short of expectations.

Although Erdogan’s speech drew some applause, it was also interrupted by shouts of “We want arms for the Free Syrian Army and a buffer zone inside Syria!” The Turkish PM’s reiteration of his previous positions seemed to dismay the refugees and some in the international community who hoped he would call for the establishment of a buffer zone or offer other more forceful support.

Thus, Turkey’s strategy of seeking regional and international initiatives to increase the pressure on Assad remains intact, but with a twist: Turkey has begun to strengthen bilateral relations with the Iraqi Kurdistan Regional Government (KRG) as a way of making inroads into Syrian Kurdish politics in a post-Assad Syria.

Without a doubt, the stakes are high for Turkey in Syria. The longer the conflict drags on, the costlier it becomes for Ankara. Anxious about the possible spillover effects of Kurdish unrest in a post-Assad era, while at the same time confronting a rise in terrorism from the Kurdish group, PKK, and distrustful Shi’a-led regimes in Baghdad, Tehran and Damascus, Turkey finds itself between a rock and a hard place. The Kurds in Syria could hold the key in the uprising: should they change sides and start supporting the opposition, they could actually tip the balance. But Syrian Kurds remain wary about Ankara’s close ties to the Syrian opposition, affording Turkey little leverage with them.

The Turks hope to gain some influence by cultivating ties with the Iraqi Kurds, who enjoy a close relationship with their Syrian brethren.

In contrast to the increasing tensions between Ankara and Baghdad following the US withdrawal last December, Turkey’s relations with the KRG are flourishing. Masoud Barzani, the head of the Kurdistan Regional Government, was given a red carpet welcome last month in Turkey when he met with President Abdullah Gul, Prime Minister Erdogan, and Foreign Minister Ahmet Davutoglu. Barzani reciprocated the warmth by highlighting Turkey’s and the KRG’s common position on Syria and signaling to the PKK that if it “goes ahead with weapons, it will bear the consequences.”

While the warming of relations between Turkey and the KRG dates back to 2008, the current push for a strategic alliance signals a new era in bilateral relations where cooperation is not only desirable but also necessary, given the unfolding events in the region.

From the Turkish perspective, closer ties to the KRG serve Turkey’s strategic interests in Syria. Turkey would like to use the clout of Barzani with the Syrian Kurds to sideline the Democratic Union Party (PYD), the PKK offshoot in Syria, and to gain some influence with the Syrian Kurds in a post-Assad scenario. The Syrian Kurds, however, are skeptical. On several occasions, high-ranking PYD officials have criticized Turkey’s involvement with the Syrian opposition, accusing Turkey of trying to turn Syria into a “satellite state” and preventing Kurds from having any role in the country. Although the Kurds in Syria are fragmented, the PYD’s stance vis-à-vis Turkey represents the majority attitude.

A key question remains: Will Barzani be willing to side with Turkey against the PKK both in northern Iraq and Syria, in addition to serving as Turkey’s entry into post-Assad Kurdish politics? Perhaps, for two main reasons.

First, following the departure of the Americans, the Iraqi Kurds need Turkey as an ally to help stave off the dominance of Baghdad. Since the last US troops left, relations between Erbil and Baghdad have sharply deteriorated over the issues of the status of oil-rich Kirkuk, the deployment of Kurdish Peshmerga forces, the hydrocarbon law, and power-sharing.

On several occasions, Barzani has openly accused Iraq Prime Minister Nouri Al-Maliki of being a dictator, and has complained about the perceived lack of good will by Iraqi political actors to resolve their festering disputes. During his visit to Washington, DC in April, Barzani sought US security guarantees for the Kurdish region but the Obama administration reportedly demurred. The Iraqi Kurdish leader sees no resolution of his thorny disputes with Baghdad on the horizon, and therefore appreciates Turkey’s helping hand. Turkey might serve both as a conduit for the KRG’s oil exports to the West and as a political ally in the fights with the Iraqi central government.

Secondly, the PKK has increasingly become problematic for the KRG. The PKK mounting attacks against Turkey and Iran from northern Iraq invites those countries’ retaliation in KRG areas via cross-border operations and the shelling of PKK strongholds, actions the KRG considers a violation of its sovereignty.
At a time when Barzani is speaking more frequently about declaring an independent Kurdish state, he has to demonstrate that he has full control over what is happening within his borders.

The PKK presence also hurts the KRG’s economic interests. Turkish and Iranian air strikes destabilize the relatively peaceful northern region, frightening away badly needed foreign investors. The situation in Syria only adds to the tension between the KRG and the PKK as the two vie for influence over their neighboring kinsmen. There have been heated exchanges between the PKK/PYD and Barzani over the latter’s stance toward the Syrian uprising. Indeed, in an attempt to sideline the PKK, Barzani did not invite its affiliate in Syria, the Democratic Union Party (PYD), to the meeting of Kurds from 32 countries he hosted in Erbil in January.

Faced with the challenges and uncertainties that the Arab Spring has implanted on its southern border, Turkey is struggling to recalibrate its regional policy, forming new alliances and ending others. Closer ties to the KRG forms one of the pillars of this new regional policy. And due to internal factors as much as external, the KRG appears to be welcoming this rapprochement with its powerful patron.

Gonul Tol is the director of the Middle East Institute’s Center for Turkish Studies in Washington.