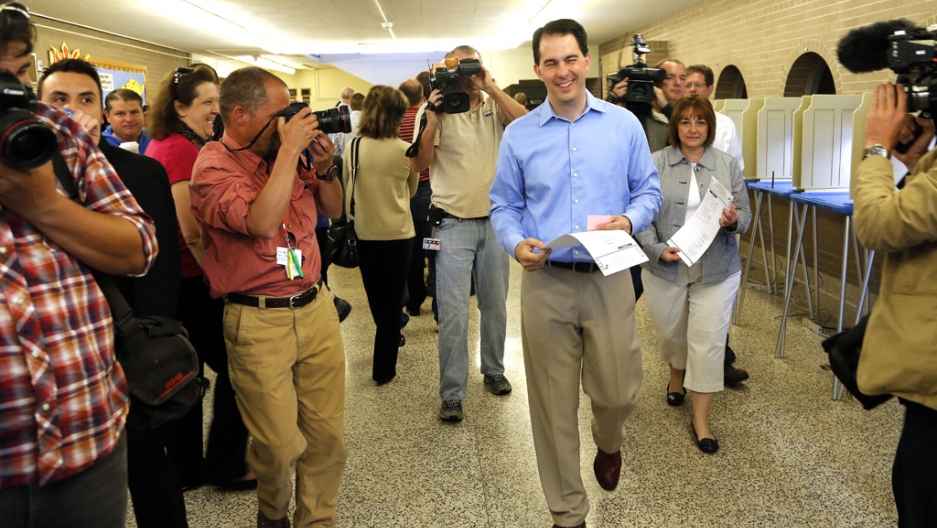 Wisconsin Gov. Scott Walker walks past media after he filled out his ballot at Jefferson School to vote in the gubernatorial recall election June 5, 2012 in Wauwatosa, Wisconsin. Voters were lined up before the polls opened at 7 a.m. to decide on the recall race between the Republican Walker and Democratic Milwaukee Mayor Tom Barrett.
Credit: Tom Lynn
Share

Wisconsin voters go to the polls on Tuesday to vote in the recall election, deciding whether to keep Gov. Scott Walker in office or not.

The calls for a recall election began when Walker, a Republican, decided to scrap collective bargaining rights for public workers and cut workers' pensions last year, setting off protests and petitions in the state. Walker will now compete for his job against Mayor Tom Barrett of Milwaukee, a Democrat, according to The New York Times.

The Times reported that Walker already cast his vote soon after the polls opened.

Political analysts are looking toward Wisconsin as a barometer for the national mood, because Wisconsin was a key state that President Barack Obama won four years ago and a defeat of the Democrats there could mean a defeat for Obama in the state in November.

Politico noted that Walker has been ahead of Barrett in virtually every poll since February, due to a huge financial advantage, support from national Republicans and economic data that bears out his case that Wisconsin is on the rebound.

Polls have shown that the race will be tight, despite Walker maintaining a narrow lead throughout, and The Atlantic noted that turnout will be a key factor in who wins.

ABC News predicted that if Walker loses the election, the media will likely declare labor activists the victors. Chris Fleming, the media director for the American Federation of State, County and Municipal Employees, told Yahoo News that the left was heavily outspent in the race, stating, "We cannot compete with the Koch brothers and all of Walker's millionaire and billionaire megalomaniac friends who want to take control of the government."

A poll released on Monday by Public Policy Polling noted that Republicans were more excited about voting in the election than Democrats.

Obama has maintained a distance from the recall election, but former president Bill Clinton did make a campaign stop in Wisconsin last week, stumping for Barrett. Yesterday, Obama tweeted this:

On election day, the Obama campaign released an ad, urging Democrats in the state to vote. An activist, identified simply as "Laura H." told voters, "We need to get our rights back. We need to get our state back," according to Yahoo News.

Meanwhile, the Barrett campaign has reported robo-calls misleading voters, telling them that anyone who signed a petition to recall Walker did not have to vote in Tuesday's election. The Barrett campaign's finance director, Mary Urbina-McCarthy, emailed supporters late on Monday, writing, "Reports coming into our call center have confirmed that Walker’s allies just launched a massive wave of voter suppression calls to recall petition signers," according to Politico.

The Walker campaign issued a statement strongly denying any connection with the robo-calls, saying, "Any accusation that our campaign is making those calls is categorically false and unfounded."

This will be the third time in US history that a governor has been recalled.